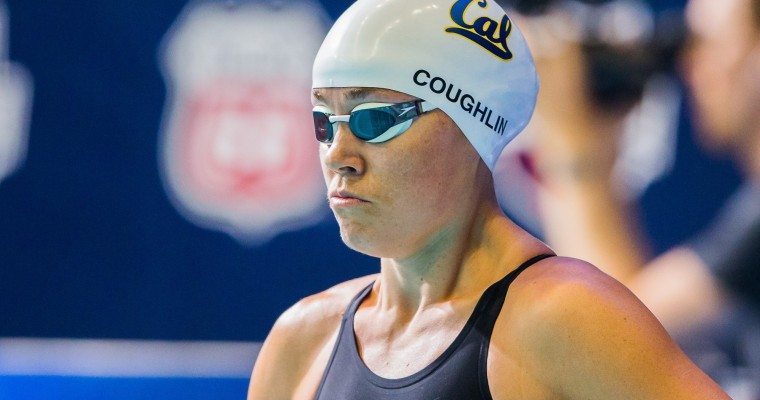 "I am a very competitive person deep down and when the beeper goes off and the race starts, I'm competitive whether it's the [Arena] Pro [Swim] Series or the Olympics so the environment doesn't really effect me," Coughlin said. "I approach them in the same way, in the same mindset." Archive photo via Tim Binning/TheSwimPictures.com

There’s not many new experiences left in the storied career of Natalie Coughlin, but she’ll get the chance to try something new this summer when she competes at the Pan Am games in Toronto.

“I’m really excited,” Coughlin said about competing in Canada. Coughlin has only heard good things about the meet and is truly excited for the new opportunity to represent her country internationally a year out from the Olympic Games.

“It’s really the last big step before our Olympic Trials and then hopefully the Olympics, so this is the last time that I’ll go through that whole cycle before the Olympics of a long trainings season into a racing season into a championship event”

Coughlin, 32, has been to three Olympic Games and is tied as the most decorated female swimmer in Olympic history with a grand total of 12 medals. She’s looking at the opportunity to compete at the Pan Am Games as an important stepping stone towards the Olympic trials.

“I’ll get that championship cycle this summer and I think it will compliment next year really well,” Coughlin said. “The year before the Olympics is a very important one. This will give me an indication of where I’m at in my training.”

The big focus for Coughlin is the 2016 Olympic Games after a disappointing Olympics in 2012 where she took home just one medal, a bronze on the 4x100m freestyle relay. In 2004 and 2008 she was the most decorated female athlete at the games.

“I wanted to do a lot more,” said Coughlin, whose London 2012 performance still drives her to new heights. “I want to see this process through and finish [the Rio Olympics] hopefully on a good note.”

For now though, the Pan Am Games are the only major competition between now and the U.S Olympic trials which will be held in Omaha, Nebraska just prior to the start of the Rio Games. At the Pan Am Games, Coughlin will be swimming the 50 and 100m freestyles with hopes of being part of a few American relays. Coughlin is one of the biggest names on the Pan Am roster with many of the American athletes competing at the World Championships in Kazan, Russia rather than Pan Ams.

Coughlin missed a spot on the World Championship roster last summer, as she failed to qualify for the team. Just a few days before nationals Coughlin was hospitalized and lost 10 pounds which left her in a condition much worse than that needed to compete against some of the best in the United States. Regardless of her condition however, Coughlin persevered and grabbed a spot on the Pan Am roster.

With the caliber of competition slightly less at Pan Ams than at the World Championships, Coughlin doesn’t believe it will have in impact on her performance. “I am a very competitive person deep down and when the beeper goes off and the race starts, I’m competitive whether it’s the [Arena] Pro [Swim] Series or the Olympics so the environment doesn’t really effect me,” Coughlin said. “I approach them in the same way, in the same mindset.”

Since the London Olympics, Coughlin has been focusing on the sprint freestyle events, dropping some of the events she’s been very successful in in the past to focus on pure raw freestyle speed. Her progress in the events will be on display at the Pan Am Games when she races the 50 and 100 freestyles, but following the games Coughlin could expand her schedule a bit more.

At the Arena Pro Swim Series in Austin, Coughlin competed in the 100m backstroke, an event she’s shied away from since London. She competed in the event a few times in a trip to Europe late in 2014 which featured Coughlin at multiple competitions, but this was one of the first times seeing her swim the event on Americans soil since 2012.

“I started doing a lot more backstroke training this past fall,” Coughlin said. She and her coach Dave Durden decided to add some more backstroke into the mix to compliment her freestyle training, and with little backstroke focus she’s swum very fast in the event.”

In Austin she came second overall in the finals to Canada’s Dominique Bouchard with a swift time of 1:00.70. Coughlin was the leader after the prelims, and lost by just two one-hundredths of a second in the finals. With that time Coughlin secured an Olympic Trials cut meaning she could swim the event at trials if she chooses to do so.

Only time will tell what the future holds for Coughlin. She’ll compete this summer at Pan Ams, then all the focus is on the Olympic Trials, and hopefully the Olympic Games. At that time, Coughlin will be 34 at the end of the 2015-2016 season and stated that after the season’s over she’ll. “re-evaluate where swimming fits into my life.”