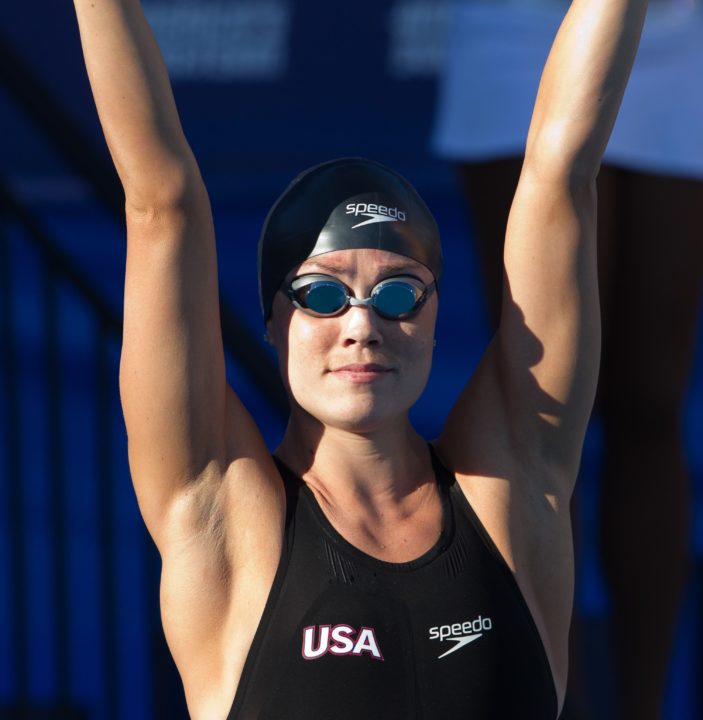 Caitlin Leverenz along with the U.S. women’s 400 medley relay each broke a Pan Ams record during prelims of the final day of Pan Am competition in Toronto, and finals will settle the medal tables between the U.S., Brazil, and Canada. Only six events remain, and it wouldn’t be surprising if every remaining Pan Am Record (save for the U.S. men’s 400 medley relay record from 2007) went down tonight. Here’s what to watch out for as the Pan Am Games come to a close.

The first woman to break a minute in the 100 backstroke, Natalie Coughlin, is looking for what could be her 60th international medal.

If all goes well tonight, @NatalieCoughlin will win her 60th major international medal…#agelesswonder

Thanks to Rowdy Gaines for the tip off! It makes the most sense for the U.S. to keep the same order as they did in prelims for the 400 medley relay, and that relay will look like this:

This morning, they dismantled the Pan Ams record, becoming the first relay to break 4:00 at a Pan Am Games. Regardless of whether or not Coughlin swims on the relay (though if she isn’t leading off, she’ll almost definitely be anchoring), her swim in prelims guarantees her a medal should the U.S. earn one in finals. Canada and Brazil definitely didn’t have their best possible lineups in prelims, but the U.S. women looked incredibly dominant this morning, and middle legs Meili and Worrell have more in the tank when considering they were slower with relay starts this morning than they were in prelims of their individual events.

The men’s relay looks to be safe in the hands of Brazil, who will get a monster breaststroke leg from Felipe Franca da Silva and don’t really have a weak leg on their relay. The Americans and Canadians will duke it out closely behind, and if the Brazilians have a poor showing on one or more of their legs, the two trailing teams will likely capitalize.

For Ryan Cochrane, a gold medal is all but secured in the men’s 1500 free. He won the 400 free with relative ease, swimming a very solid non-shaved time for him as his summer focus is on Worlds in August. He’s the only entrant seeded under 15 minutes, and his seed time of 14:44.03 is the only entry under 15:07. The race will be for silver, as 2nd seed Andrew Gemmell will try to fend off 400 free silver medalist Ryan Feeley, his American teammate, and up-and-coming 400 IM gold medalist Brandonn Almeida, among others.

On the women’s side, Brittany MacLean holds the top seed at 8:20.02, but after battling injury this year, she doesn’t look like a huge podium threat. The race will likely come down to Venezuelan star Andreina Pinto and the young Americans Courtney Harnish and Sierra Schmidt. Harnish was a member of the U.S. women’s gold medal 800 free relay, where she split a 1:59.61 after never having broken 2 minutes in the individual race. Schmidt might be the favorite of the two, though, as she’s been as fast as 8:28.91 this season for a personal best in June at the Arena Pro Swim Series at Santa Clara.

PAN AM RECORDS ON THE LINE IN THE 200 IM

Both Caitlin Leverenz (USA) and Sydney Pickrem (CAN) slid well under the old Pan Ams record in the 200 IM of 2:13.07, both posting low 2:11s in prelims. Leverenz has much more experience than the young Pickrem, and has been under 2:10 before, though Pickrem is a growing talent and will be the biggest obstacle in the way of a second gold medal for Leverenz. It wouldn’t be surprising if both dipped under the new record set by Leverenz in prelims.

Thiago Pereira is in lane two for the 200 IM A final, but don’t let his position fool you. Pereira holds the Games record at 1:57.79, a time he swam at the 2007 Pan Am Games, and has already won gold as a part of Brazil’s 800 free relay. He looked to have won the 400 IM, an event in which he won Olympic silver in 2012, but was later disqualified. Pereira is on the cusp of becoming the most decorated athlete (he’s already the most decorated swimmer) in Pan Ams history, and medals in this race and the 400 medley relay will earn him that title. He’s the favorite for this race, and it’ll be fun to see if Americans Gunnar Bentz and Ty Stewart can race Brazilian Henrique Rodrigues and Canadian Luke Reilly for spots on the podium.

Fun Fact: Vlad Morozov already has 29 medals, despite being 10 years younger. Joseph Schooling is even younger and already has 22 international medals, though zero of them come from global competitions.

Looks like they’ll be blowing Coughlin out of the water pretty soon.

Except you might wanna consider that 18 of Schooling’s medals came from the somewhat less-competitive Southeast Asian Games, and Vlad benefits from the European SC champs being every year, where he’s won 14 medals.

And let’s not delve too far into Ous Mellouli’s 15-gold performance at the 2011 Pab Arab Games, which has substantially boosted his internat’l total.

I hope she kept them all and has them displayed. I would love to see that!