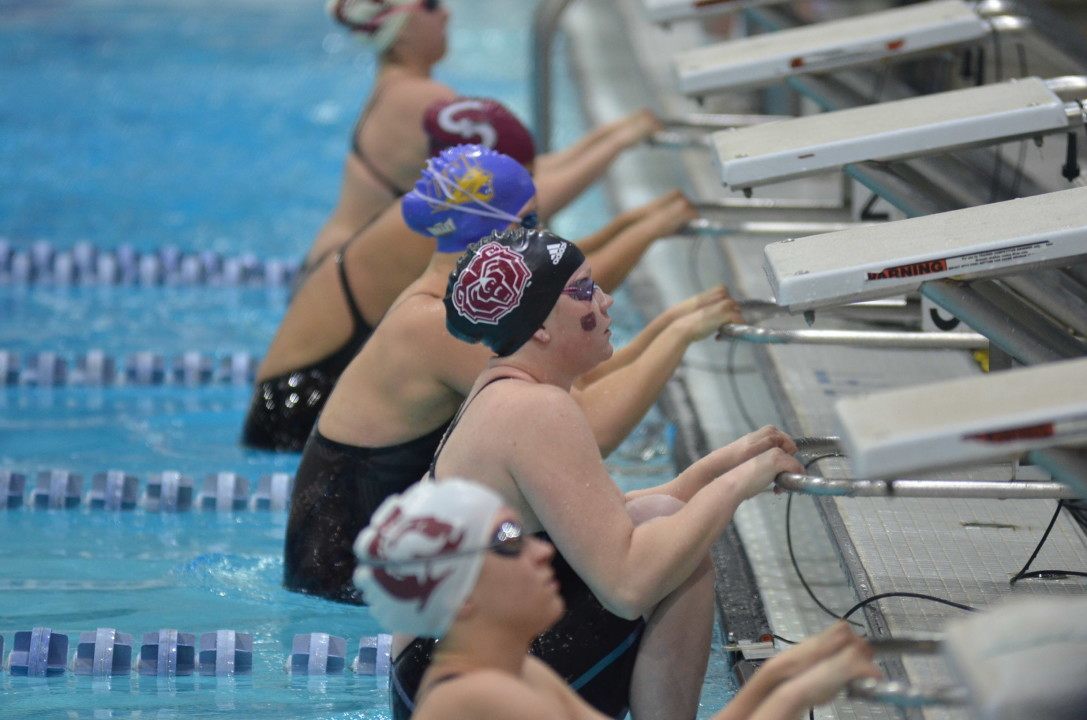 Southern Illinois carried the lead over the first two days of the 2016 Missouri Valley Conference Championship, until day three saw an inspired session for the 8-time defending champion Missouri State Bears that allowed them to move ahead.  After winning four of the six events on day three, the Bears carried a 37.5 point lead over SIU.  That cushion would in no way allow the Bears to let their guard down considering the events left on the schedule include some of the Salukis’ best chances to rack up major points.

The mile at the 2016 MVC was expected to be a strong event for Southern Illinois, and after falling behind the Bears for the first time in last night’s finals session it would be a ray of hope to keep their dreams of a conference championship alive.  The Salukis absolutely took ownership of the event, capitalizing on points from five of the top six finishes.  SIU was the only team to land a swimmer below 17-minutes, and they managed to have four of them with Bryn Handley, Kelsie Walker and Helena Amorim listed above, along with Junior Lauren Stockton who turned in 16:58.97 for fourth.  Sophomore Nicole Fuller took 6th for the Salukis in 17:11.02, behind UALR’s Tori Fryar at 17:05.19.  Missouri State earned 7th and 8th place with a 17:16.25 from Heather Snyder and a 17:20.52 from Emma Metz.  After this knock-out event for SIU, they took back the lead over the Bears 577.5 to 566.

Sarah James, Rachel Root and Aftin Phyfe all managed to upset defending MVC Champion, Missouri State’s Sydney Zupan who turned in a 2:01.93 for 4th place.  SIU winning their second event in a row makes day four look an awful lot like day three looked for the Bears after starting the session yesterday with a 1-3 sweep of the 400 IM.  Even with the stellar finish from James, the advantage in this event went to the Bears as they had three swimmers in the A-final to SIU’s two, with Briana Horozewski (2:03.50) and Emily Chesser (2:03.69) taking 5th and 6th behind Zupan.  This event brought the Bears team score above the Salukis, but only by half a point, 615 to 614.5.  This rivalry just escalated to a whole new level folks.  ISU’s Karley Licking and SIU’s Morgan Timms finished 7th and 8th with 2:03.95 and 2:05.10 respectively.

Northern Iowa’s sprint squad has really put on a show this year, leading the charge that has gained tremendous respect for the Panthers based on their meteoric improvement since last season.  Molly Lembezeder and Crystal Florman have been consistently excellent in the sprint events, and by taking the top two positions for this event they are making a statement that UNI has more to come in the next few years.  SIU’s McKenna Avery out-touched Missouri State’s Loretta Stelnicki 51.18 to 51.37, with Evansville’s Michaela Kent close behind at 51.43.  SIU flexed their freestyle muscles by racking up more points after Oliwia Okaj and Chandler Ott picked up 6th and 7th at 51.71 and 52.10.  UALR’s Emma Doll was 8th with 52.21.  SIU also had two swims in the B-final, versus MOST’s 1 up – 2 down scoring.  This brought the Salukis to a 28.5 point lead over the Bears, 667.5 to 639, with only four events left in the competition.

Northern Iowa’s Veronica Herrmann once again upset defending champion, Lauren Pavel from Missouri State, by an incredibly close margin.  In contrast to the race between these two in the 100 breast, this time it was Hermann who got out ahead, with Pavel making a surge on the last 50.  Pavel out-split Herrmann coming home 35.91 to 37.05, but it was not enough to bring the title home for the Bears.  Missouri State’s Olivia Gean finished fourth in 2:19.98, ahead of SIU’s Emma Brazeau at 2:20.78.  Illinois State’s Rachel Holm (2:22.31,) SIU’s Liane Tatigian (2:24.19,) and UNI’s Olivia Knowles (2:26.95) rounded out the top 8.  Even though the Bears’ two A-finalists bested the two Saluki’s in the heat, the team score advantage went to SIU as they had a 9th place finish from Abby Kresal as well at 2:22.84.  Team score after the breaststroke: 702.5 Salukis, 671 Bears.

Intense.  That’s the only word this writer can come up with.  The Bears and Salukis have been trading uppercuts back and forth all weekend, with the final session delivering all the excitement any fan could ask for.  Southern Illinois needed the absolute best from their two divers in the final round, and the girls rose to the challenge.  Cheri Zhang won the event with 359.70, well ahead of the rest of the field.  Saluki teammate Rachel Williams turned in the runner up performance at 273.90, followed by Evansville’s Courtney Coverdale at 3rd with 255.65.  Northern Iowa scored three divers in the A-final with Allie Bay at 4th (253.50,) Sarah Kemp 5th (242.15,) and Alyssa Deuso 7th (216.15.)  Illinois State scored 6th and 8th with 226.35 from Molly Schatz and 212.35 from Kelly Sanks.  Missouri State’s lone diver to make the final rounds was Alexis Skiniotes at 10th with 236.40.  Not kidding folks… after diving Missouri State held on to their lead, but only by 1.5 points.

The Saluki freestylers have been an incredible force all weekend, so one can only imagine that they felt they could win it all.  Defeating the Bears in this relay, no matter what place they finished, would have won them the MVC Championship for the first time in nine years.  The Bears team of Stelnicki, Kiss, Zupan and Amparano turned in a team record 3:24.35 but it was not enough to win the day.  The Salukis squad of Okaj, Avery, Walker and Handley, by taking second place over Missouri State’s 3rd, pulled off the upset by unseating the 8-time defending champion Bears for the team title by half of a point.  After all of the back and forth between the two teams over this four day grudge match, Rick Walker’s girls held strong and came through in the clutch to bring the title back to Carbondale.