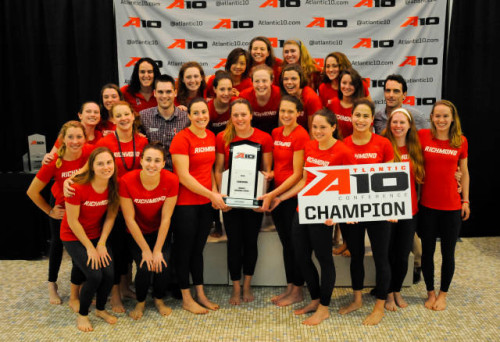 Coming into the final day of competition, there were many close team battles throughout the women’s rankings. Richmond sat with a very comfortable 106 point lead, but Duqesne and Davidson were very tight for 2nd, and Massachusetts and Fordham were very close in the battle for 4th.

Lexi Santer of Duquesne defended her top seed from prelims winning the 200 back in at time of 1:58.00, just getting by Richmond’s Hannah Verrette and George Mason’s Steff Maurer. Verrette was 2nd in 1:58.59, and Maurer was 3rd in 1:58.67. The top-3 were the only swimmers who broke 2 minutes, and were all under the NCAA B standard of 1:59.19. Santer’s big win opened up a 22 point lead for Duqesne over Davidson in the battle for 2nd place.

Sam Ray and Gabrielle Sibilia continued Duquesne’s great finals session, going 1-2 in the 100 freestyle. Ray won in a time of 49.47, breaking the conference and meet record. The previous conference record belonged to Brooke Boncher from Richmond who went 49.79 in 2004, and the previous meet record belonged to Elise Lankiewicz of Davidson, who went 49.83 last year. Sibilia was 2nd in 50.10, and Chandler Lulley of Fordham was 3rd in 50.24. 50 free champ from earlier this meet Sydney Fisher was 4th in 50.49.

Richmond were the run away winners, winning their 5th straight conference title. The last team to win that wasn’t Richmond was Fordham in 2010, when they broke Richmond’s eight year win streak. Duqesne held off Davidson for second, and Massachusetts got by Fordham just barely for 4th. Rhode Island finished 7th in a very close battle with La Salle, George Washington, and St.Bonaventure.

Heading into the final day, Massachusetts held onto an overwhelming lead for 1st in the team race with 472 points. St.Bonaventure and La Salle are locked in a very close battle for 2nd, separated by just 1.5 points, and Saint Louis and George Washington are very tight for 4th, with George Mason and Davidson not far behind.

Alessandro Bomprezzi picked up his third gold medal of the meet in the 1650, dominating the field winning in 15:15.61. He was a little less than 2 seconds off of his own conference and meet record he sets last year on his way to victory. Bomprezzi also won the 500 free and was the key anchor leg on Massachusetts winning 800 free relay. Mattias Glenesk of La Salle was 2nd in 15:27.00, and Bomprezzi’s Massachusetts teammate Kyle Vieira was 3rd in 15:38.66. Bomprezzi and Glenesk were both under the NCAA B standard of 15:30.39.

Steve Sholdra of Fordham won his second gold medal of the meet in the 200 fly, winning in a time of 1:47.10. That swim broke the conference and meet record of 1:47.36 previously held by Danny Camozzo from 2014. Sholdra won the 400 IM earlier. St.Bonaventure’s Michael White was 2nd in 1:47.89, getting under the B cut of 1:47.99. Oliver Keegan of George Washington picked up bronze in a time of 1:48.28. With only the 400 free relay remaining on the men’s side, St.Bonaventure held a 10.5 point lead over La Salle for 2nd, and Saint Louis had put themselves safely into 4th.

Massachusetts clinched their second straight conference victory with 671 points, well ahead of the rest of the field. 2013 & 2014 champion St.Bonaventure managed to pull off second place, edging out La Salle by 8.5 points. Saint Louis was 4th, and George Washington edged out George Mason by 2 points for 5th.