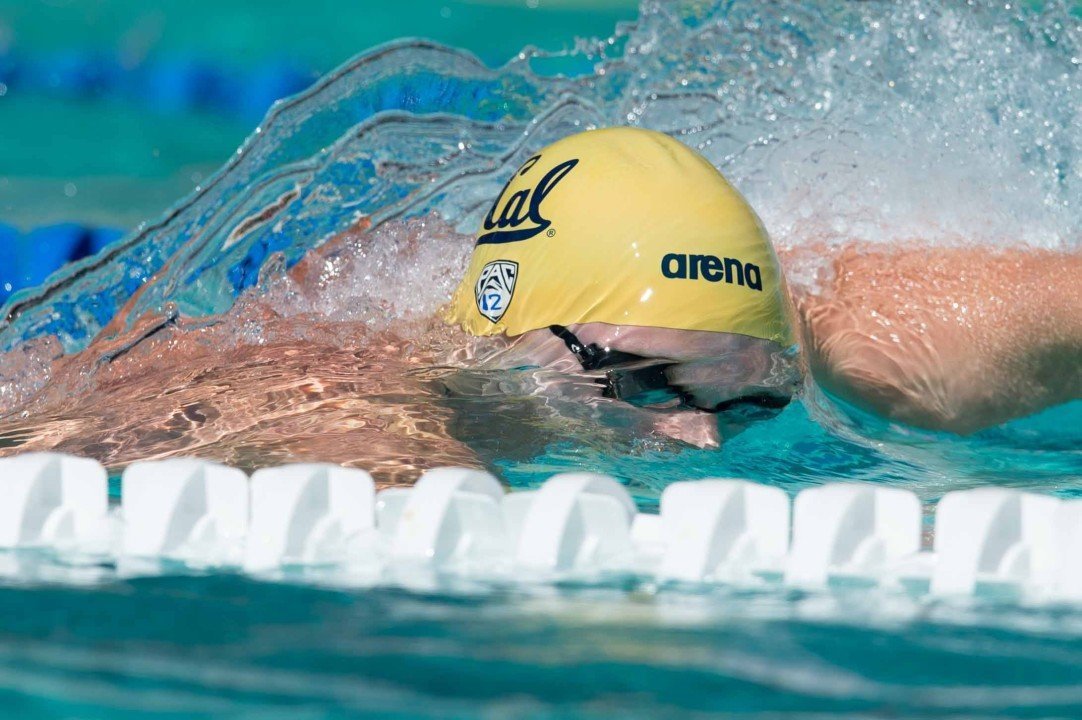 Cal managed to win the backstroke without even entering NCAA backstroke whiz Ryan Murphy. That’s because Murphy took on the sprint frees instead, winning that category as teammate Jacob Pebley handled the backstrokes.

Stanford’s lone win came in the distance category, where senior Danny Thomson rolled over the field. Thomson won both of the longer races (500 free in 4:28.41 and 1000 free in 9:07.21) with great times and solid margins, and took second in the 200 at 1:41.33. His teammate Liam Egan was just a tick ahead at 1:41.25, a margin that turned out to be easily overcome in a category that finished with final times in the 15-minute range.

The lone sweep of the meet came in the breaststroke, where Cal sophomore Connor Hoppe won all three contests. Hoppe was most dominant in the shorter distances (his 25.00 won the 50 by over a second, as did his 54.94 in the 100), but ground out a win in the 200 at 2:03.05. Cal freshman Carson Sand was second in all three races.

Cal also won the butterfly, with Justin Lynch taking two of three. Lynch won the 50 (21.63) and (48.03), but looked like he might succumb to the same fate as Umbach in the 200. But while Stanford’s Jimmy Yoder won in 1:45.92, neither he nor second-place Long Gutierrez had the early swims banked up enough to beat Lynch, who went 1:47.00 and hung on for the discipline win.

The meet concluded with a pair of relays, which the teams split. Cal won the 200 medley, going 1:28.56. That paired up category winners Murphy, Hoppe and Lynch with junior Jonathan Fiepke. Murphy, swimming his only backstroke race of the night, was 21.95, and Hoppe beat Stanford by nearly a second with his 24.42.

I go to all the Cal meets since I live 5 minutes from the campus.
To answer your questions:

Michael Thomas DID participate in his first meet for Cal. His times were so-so, but remember you are talking about 2 Universities with outstanding swimmers. And, of course, it is early.

Seliskar was on the deck but did not swim. Prenot is a Physics major in his Senior year and probably had a class in the afternoon this mid-week. Don’t know what Messerschmidt was doing. He has swum this Fall in earlier meets, IIRC.

Also, maybe Cal was keeping some of the swimmers fresher for the really tough dual meet this afternoon (Friday 11/06) against a strong… Read more »

Thomas was a DQ (start) in the 50 back so he couldn’t score.

or Messerschmidt? Was Thomas in the meet?

takes some kind of chutzpah for Nickh to post a UT clip within a Cal-Stanford article.

Does it though? Swimswam doesn’t have forums so sometimes you just have to post a comment on an unrelated article. Nobody complains when Bobo posts unrelated race videos on articles. Besides, the intrasquad was 1000 times more impressive than any times from this meet

suited times tend to have that effect riley…and indoors…

I know that and I’m not trying to disparage the many fast times from Cal/Stanford by any means, but a lot of people on Swimswam were interested in more info about the Texas meet and an article about two of their biggest rivals is probably the right place to post it since another thread about it won’t come up again.

I’m inlove with Ryan Murphy and I am a dude. Its not a joke. Its a secret.

Looks like may see Murphy swimming the 50 free this year on the first day. They added Seliskar and Thomas but lost Stubblefield, and the training will detract less from his backstroke focus. Plus if he wants to throw in a 100 free at trials it wouldn’t hurt.

Probably also probing/enhancing his chances of making the 400 free relay for Rio. He had a heckuva 100 free on the relay at NCAAs last year.

It’s tough to do both the free relay final and the 100 back final at the Olympics, which is a big reason why Grevers has been left off the relay the last two times. It’s about a 10 minute turn around.

I hope all the former bolles guys do the 100 free this year (instead of the 2IM for murphy and schooling) along with conger (for him it would be dropping the 100 back)..

for the US men’s team they’ll probably need dressel, conger AND murphy

for schooling, the 100 free might be his second best event to go with the 100 fly come rio (considering he ‘winged’ a 48.58 over the summer before worlds)

obviously dressel and condorelli will both do the 100.. but would love to see those other 3 in as well

I would also add Rooney to those 3 …

outside of phelps and Adrian, the US is going need 2 guys to step up for those middle two legs (so they’ll have to be at least 47.5 with a relay start).. also going need solid guys for the prelims (see what happened at worlds)

as I’ve said before, I think phelps should be the leadoff and Adrian anchoring

Highlights of the Eddie Reese Invitational thanks to Longhorn Network:

That 2000 from Clark Smith is pretty close to McBroom’s time last year, no? I imagine he’ll be doing that instead of the 2fly this year.