Murphy Breaks 200 Back Pool Record in Cal Victory Over ASU 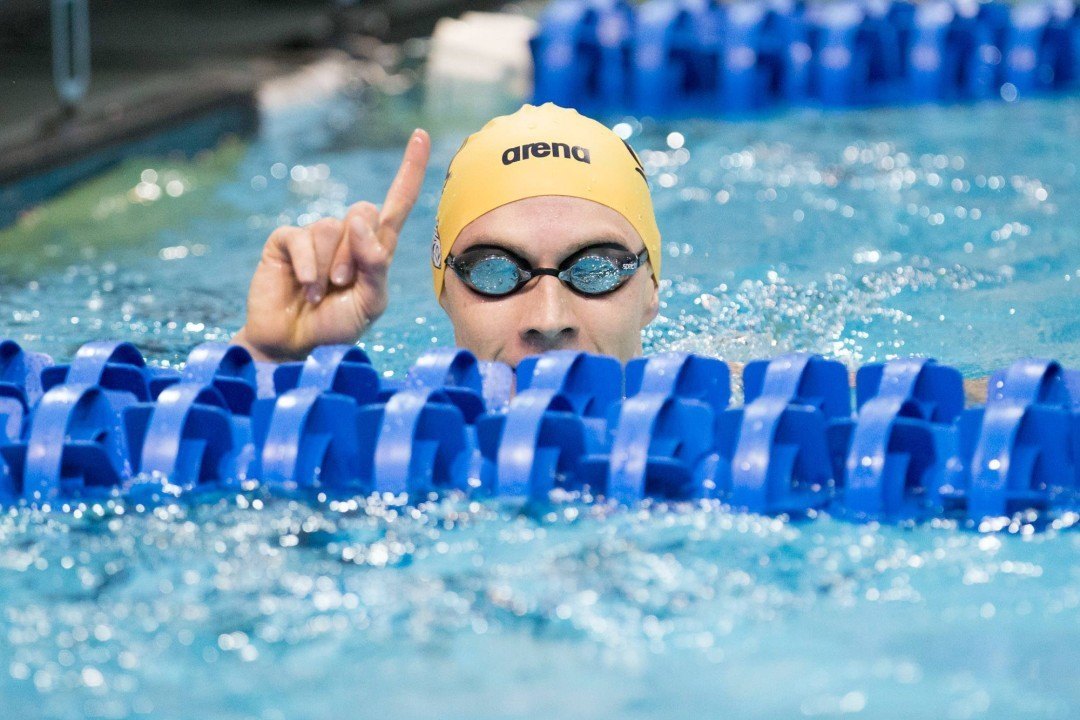 Olympic backstroke champ Ryan Murphy downed a Pool Record in the 200 back on Saturday to help the Cal Bears defeat Pac-12 rival ASU. Murphy won the race in 1:41.22, clearing the former record set at 1:41.84 by ASU swimmer Barkley Perry in 2016. He secured a sweep of the backstrokes, as he won the 100 back earlier in the session in a 46.42.

TEMPE, Ariz. – For the second day in a row, the Cal men’s swimming and diving team touched the wall first in each race and that translated to another emphatic dual meet victory as the Bears beat Arizona State 160-130 to win their second dual meet in as many days.

One day after earning a win at Arizona, No. 1-ranked Cal (3-0) kept its momentum going against a No. 12-ranked Arizona State squad swimming its final home meet of 2016-17. High winds and chilly temperatures didn’t deter the Bears from getting off to a good start as Ryan Murphy provided a big lead after the backstroke leg and Hunter Cobleigh, Justin Lynch and Long Gutierrez kept right on rolling to a time of 3:09.67 and a win in the 400-yard medley relay.

Sophomore Nick Norman got his day started with a competitive effort in the 1,000 freestyle, battling Arizona State’s Benjamin Olszewski throughout but eventually picking up the win with a time of 9:14.05. The 200 free was a similarly close affair, but this time it was a pair of Bears fighting for the win as Gutierrez pulled into the lead late to edge Jensen with a time of 1:35.34. Ryan Kao placed third and Kyle Coan touched fourth to wrap up a Cal sweep.

A trio of Bears battled through the breaststroke events with Connor Hoppe picking up the win in the 100, Andrew Seliskar taking the 200 and Hunter Cobleigh placing second in both. A similar scenario played out in the butterfly with a good dual between Seliskar and Matthew Josa giving way to a Seliskar win in the 200 and Josa coming back to outduel Lynch for a win in the 100.

Jensen continued a standout freshman campaign with more success in the sprint freestyle as the native of Upper Dublin, Pa. won the 50 for the second-straight day and added a victory in the 100 as well. The 500 free provided some of the day’s more exciting racing as Kao overtook ASU’s Olszewski in the final 50 yards to win with a time of 4:28.23.

After the final break of the day, Seliskar put the finishing touches on a big day with a dominant top time of 3:50.88 in the 400 individual medley. A battle between Bears capped a 1-2-3 finish as freshman Jack Xie outdueled Ken Takahashi for second. The day closed with another strong relay performance as Jensen, Murphy, Pawel Sendyk and Josa earned the top time of 1:18.99.

Conor Callahan added points for the Bears with a pair of third-place finishes in diving but the freshman continued to show his progress as he set season-highs with a score of 355.05 in the 1-meter and 382.65 in the 3-meter. Both marks are believed to be the second-best in program history.

Cal returns to action at Spieker Aquatics Complex on Feb. 3 when the Bears host USC at 2 p.m. The 2016-17 dual meet season comes to a close on Feb. 18 when Cal hosts Stanford at noon. That meet will also serve as Senior Day and the final prep meet for the Pac-12 Championships in Federal Way, Wash.

TEMPE, Ariz. – California completed a sweep of its trip to the desert, racing past Arizona State, 181-111, in a dual meet Saturday. The Golden Bears won 14 of 16 events, and sophomore Phoebe LaMay broke her own school record on the 1-meter springboard.

Cal, which defeated Arizona Friday, opened the meet by taking the first two races – the 400-yard medley relay and the 1000-yard freestyle behind freshman Chenoa Devine‘s time of 10:06.20, which was more than seven seconds ahead of the rest of the field.

Sophomore Amy Bilquist, who captured two backstroke events against Arizona, came through with a pair of victories in the free at the 100- and 200-yard distances. Sophomore Kathleen Baker, an Olympic silver medalist in the 100-meter back, won the 100 and 200 back, while sophomore Katie McLaughlin prevailed in both the 200 butterfly and 500 free.

LaMay opened her day with a win in 3-meter diving, then scored 317.63 on the 1-meter board to break her own school mark of 314.18 set earlier this season vs. Texas.

Others to touch the wall first for the Bears were freshman and Olympic medalist Abbey Weitzeil in the 50 free and junior Noemie Thomas in the 100 fly, as she remained undefeated in the event this season. In addition, senior Celina Li captured the 400 individual medley and the Bears won the 200 free relay.

“We swam people in some different events and I thought it went well for us,” head coach Teri McKeever said. “We’re definitely moving in the right direction, but we’re going to need to be better for next week. We are looking forward to having USC and UCLA come in because we know they’re going to give us a strong challenge. It’s parents’ weekend for us, so we hope to have a good crowd for both meets.”

TEMPE, Ariz. – The Sun Devil swim and dive teams hosted the top-ranked Cal men and sixth-ranked Cal women in their final home dual of the season, honoring their senior class prior to the day’s meet.

“We started out really lackluster and I had a talk with them at the first break,” said head coach Bob Bowman. “We came back and rallied a little better after that, the women in particular were much more competitive. We have to learn how to put two days in a row back-to-back. A lot of it is mental and how you manage yourself. That’s kind of the next step in our development as a team, to not just put together one good day but two.”

Of note, newcomer Silja Kansakoski won the 100 breast (1:01.30), over a second faster than the second-place finisher from Cal. Marlies Ross and Kansakoski also led the pack, going 1-2 in the 200 breast, finishing three and four seconds ahead of Cal’s first finisher, Celina Li.

“For the women, Marlies Ross was good and Silja Kansakoski was very, very good. I thought our female sprint relays on the end were good. Tadas [Duskinas] was good again today, probably the best one we had [on the men’s side].”

“Against Stanford, we stack up ok. Against Cal, we don’t stack up yet but the good news is that they are the best team in the country; there aren’t any teams better than them. It’s a long journey to get to that level. They didn’t get there overnight and we aren’t going to get there overnight. Our meet against them this year was way better than the one last year, so that’s what we have to look at to make sure we’re improving year-to-year.”

“We’re not in a bad place, we just have to keep going. I always want to be better than we are. I think there are plenty of things to work on and we have the foundation to do what we want to do in two weeks and at the end of the season.”

Following the meet in Tucson, Pac-12 championships will be late February/early March, with NCAA’s Mar. 22-25 in Indianapolis, Ind.

if you read the Cal press release they have the pool record correctly listed, poor effort on this synopsis article

Hey Chelsea. Actually, the Cal press release is where I read that he set the Pool Record. I will absolutely look into it and make any corrections if necessary. Please keep in mind, though, that we cover a lot of these meets. If mistakes are made, I do the best I can to fix them quickly. Thanks for understanding.

Whoa, there! About harsh, aren’t we? All swimswam journalists are quick to make corrections when needed. No need to berate them

Texas will win this year, but man, Cal is going to dominate for many years to come

Right. This year will be close and I wouldn’t put a Cal win out of the question, but Texas is probably a bit stronger. But Cal’s underclassmen are looking really good.

I think Texas wins this year on diving points, but Cal may score more swimming points. Should be a very competitive NCAA championship.