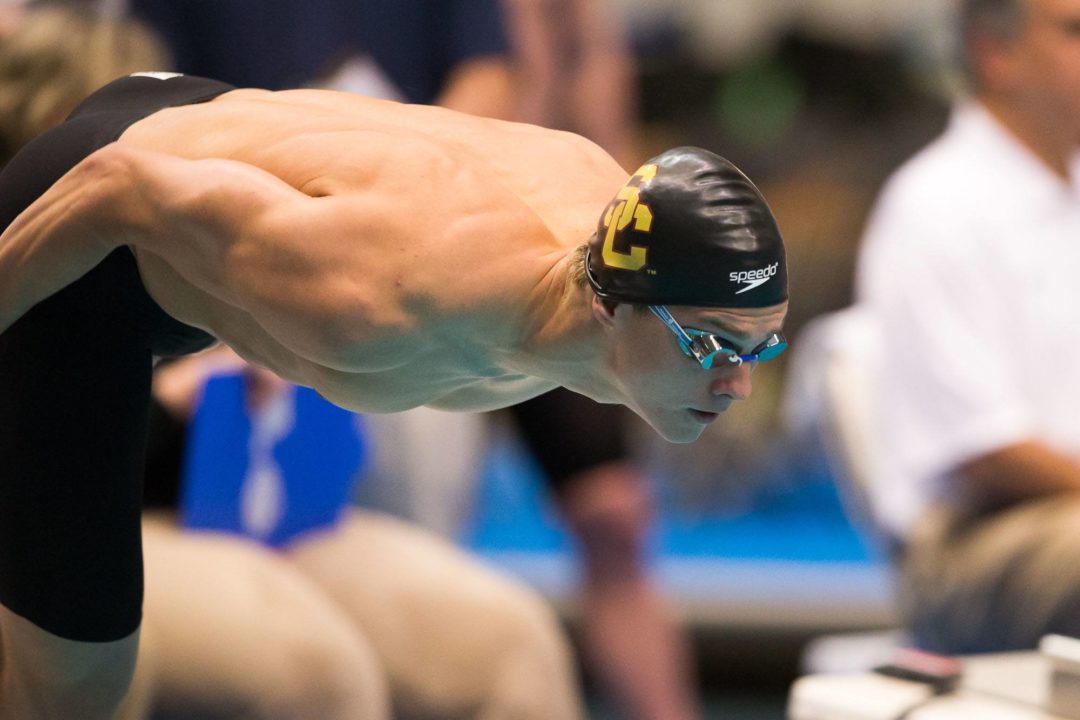 Each representing one of California's powerhouse college/pro swimming hubs, Vlad Morozov, Maya DiRado and Ryan Murphy each came down with a win on the second day of the Irvine Novaquatics Speedo Grand Challenge. Archive photo via Tim Binning/TheSwimPictures.com

Morozov won the opening event with perhaps the most impressive performance of the entire night. The former USC sprint dominator cracked 22 seconds to win the 50 free, going 21.95. That time would rank top 5 in the world, but Morozov already sits at #2 with his 21.65 from Russian Nationals.

Morozov is looking like a legitimate gold medal threat at this summer’s World Championships, trailing only France’s Florent Manaudou in the world rankings.

DiRado, a Stanford alum competing for the team’s professional group, won her third event of the meet so far in the 400 IM. DiRado won the race by over ten full seconds, going 4:40.61. That’s not a season-best, but if it were, it would rank within the top 25 in the world this year. She topped Cal’s Celina Li (4:51.27) who is no slouch in the event, herself.

Then there’s Murphy, the rising junior for the California Golden Bears. Seen by some as the heir apparent to the sterling American backstroking legacy, Murphy was just three tenths off a season-best to win the 200 back, going 1:57.20. Murphy is the fastest American in the event this season, and this time beats out all other American swims this season besides Murphy’s own 1:56.91 from the Austin Pro Swim Series meet.

His Cal teammate Jacob Pebley was second, cracking two minutes with a 1:59.40.

Cal also got two wins on the women’s side, courtesy of Elizabeth Pelton. Pelton was 1:58.86 to beat out talented Stanford youngster Simone Manuel in the 200 free early on. Manuel was a force in the event in short course, and was a solid 1:59.11 here, but is probably better suited for the 50 free and 100 free in the Olympic-sized pool.

The men’s 100 fly was the only senior race where the winner came from outside of those ‘big three’ clubs. Clovis Swim Club’s Carl Weigley was 52.56 to touch out Cal’s Long Gutierrez (53.74).

The night closed with the men’s 400 free, where USC’s Cristian Quintero picked up the easy victory in 3:53.63. He beat teammate Nikita Lobintsev (3:57.40), avenging a loss to Lobintsev in last night’s 200 free.

You can find full results of the meet here, or on Meet Mobile.

As I alluded earlier today, we wouldn’t be having any articles expressing concern over the state of USA men’s sprinting if Vlad was representing the US. Since 2013…

Don’t forget about Ervin splitting that monster 47.44 in 2013. Age just doesnt seem to catch up with him

I think he is well compensated by Russia. Changing representation would cost him financial support.

Why does Morozov swim for Russia?

Because he is Russian and was born in Russia

What Markster already said: he’s Russian and was born in Russia. Yeah, he swam at USC but lots of internationals actually come to US colleges to swim because of the experience (and academics and other various reasons). Our college coaches are phenomenal, and our the NCAA programs ready people for the pressures to come. I think there was a fun fact at the 2012 London Games where 7 of the 8 finalists in the 50m Free had actually swam college in the US, the infamous Milorad Cavic was a swimmer at Cal Berkley even. Aside from that, the US is also has a ridiculously hard Olympic team to make so anywhere else is much better. Partially why Arkady Vyatchanin decided… Read more »

You sure he was born in Russia? Maybe his parents are Russian and he is a dual citizen? I thought he went to Torrance high school.