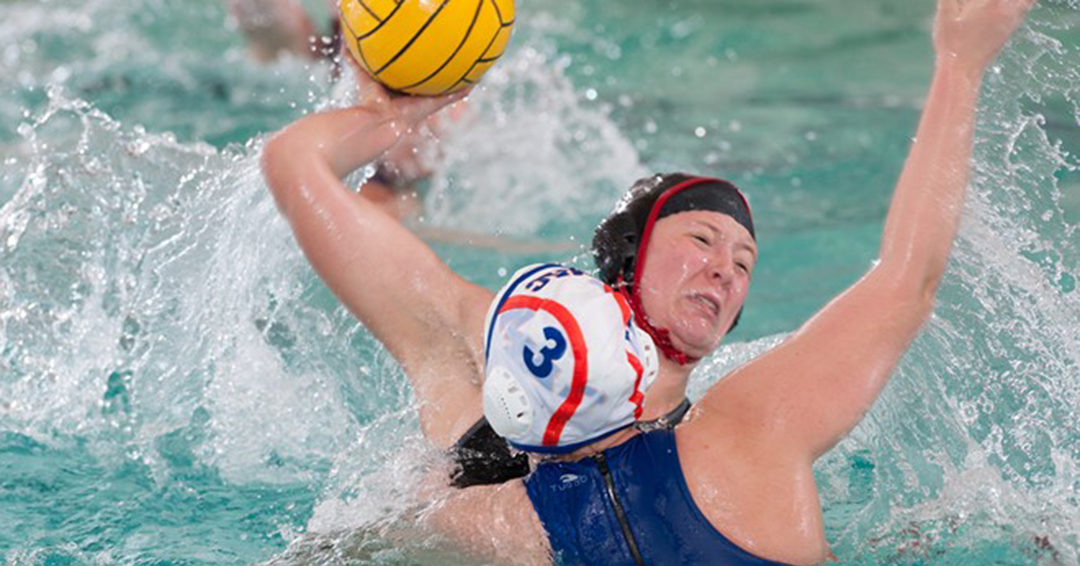 All eyes are on Italy and Hungary for the weekend: Padova, Rome, Budapest and Eger will host the four qualification tournaments in the Champions League Women.

Savannah Phillips netted nine goals, while Tatum Bruno scored three as Wittenberg bested Connecticut College 15-12 on Saturday at the CWPA Division III Championships. Phillips scored all six of the team’s goals in a 17-6 loss to eventual champion Macalester on Friday. Phillips then put in five goals and Emma Menjivar added four in the Tigers’ 14-5 win over Washington & Jefferson. Phillips notched five scores in the team’s season finale, an 11-9 loss to Grove City on Sunday.

Lexi Wong scored a program record eight goals and Brooke Le put in six as Austin College moved past Penn State Behrend 19-7 on Friday. Presley Woods chipped in a hat trick. Wong notched a hat trick in the Roos’ 7-2 win over Carthage in the second round of the CWPA Division III Championships on Saturday.

Villanova’s Kaysie Stuba scored seven goals in nine shot attempts in a 12-7 win over VMI on Saturday. She later went 6-for-6 to lead Villanova against LaSalle, but it was not enough as the Wildcats fell 15-12 to the Explorers in overtime. Kate Murray added a hat trick in the loss. Malia Gacutan scored four times in Villanova’s 26-8 loss to #22 Marist on Sunday.

LaSalle’s Sarah Defuso accounted for seven of the team’s 14 goals and Madison Martinez chipped in four in a 14-13 win over Siena on Sunday. Defuso scored five and Martinez put in three goals as the Explorers topped Villanova 15-12 in overtime on Saturday.

Connecticut College’s Stephania Lopez turned in six goals and Ginny McCool put in three in the team’s 15-12 loss to Wittenberg on Saturday. Lopez and Brooklyn Hayes each netted a hat trick as the team bested Utica 12-4 earlier in the day. Earlier in the week, Lopez added five scores as the Camels fell to Monmouth 25-10 on Friday and chipped in four goals, while Hayes added a hat trick in the team’s 14-8 loss to RV Brown on Tuesday.

Jessica Diaz tallied six goals for Cal Lutheran among eight scorers in the team’s 18-9 win over Chapman on Saturday.

Sawyer Bellville netted six goals in eight shots to lead Whittier in a 15-5 win over Occidental on Saturday. Teresa Marchetti followed with a hat trick.

Cal State Monterey got six goals from Morgan Tucker in its 15-14 sudden death loss to Fresno Pacific on Saturday.

#6 Michigan saw Maddy Steere score five goals and Julia Sellers (4) and Maddy Johnston (3) follow in the team’s 17-2 win over #18 Harvard on Saturday. Abby Andrews and Erin Neustrom scored four goals apiece and Kim Johnson added a hat trick in the Wolverines’ 16-6 win over #18 Bucknell on Saturday. Sellers and Neustrom put in three goals apiece as Michigan rounded out the regular season with a 14-5 win over George Washington on Sunday.

Ciara Franke put in five goals for #14 UC San Diego as the Tritons fell to #6 UC Irvine 11-8 on Friday. Franke scored three times in a 12-4 win over Pomona Pitzer on Saturday.

#17 Fresno State topped Santa Clara 15-8 on Sunday thanks to a five-goal effort by Trystyn Vuori and a four-goal haul by Emily Nicholson.

Iona’s Maeve Wydan notched five goals in Iona’s 11-10 win over VMI on Saturday. Jillian Schultz turned in a hat trick in the Gaels’ 6-5 win over St. Francis Brooklyn later in the day.

Siena’s Georgia Vargas put in five goals and Diana Fernandez added four in the team’s 14-13 loss to LaSalle on Sunday. Vargas accounted for four goals as the Saints edged out St. Francis Brooklyn 9-8 on Sunday. Kristen Burger tallied three goals in the team’s 23-8 loss to #18 Wagner on Saturday.

#4 Cal followed four multi-goal efforts, including four scores from Emma Wright, in the team’s 17-5 win over Indiana on Sunday. Brigit Mulder and Wright turned in hat tricks in the Bears’ 13-12 loss to #1 Stanford on Saturday.

Macalester’s Annika Krueger and Adeline Steward-Nolan put in four goals apiece and Natalie Hoffman scored three times as the Scots topped Wittenberg 17-6 to kick off its run to the CWPA Division III title on Friday. Krueger and Cara Mullery scored four times each in a 13-11 win over Monmouth on Saturday. Mullery notched a hat trick alongside Oriana Galasso in the 8-5 championships match win over Austin College on Sunday.

Carthage got four goals from Maddi Marsh and three from Meghan Fisher in its 9-3 win over Utica on Friday. Fischer added four more scores at the Lady Reds topped Grove City 9-6 later in the day.

Cal Tech got four goals from Katie Johnston, but it was not enough in a 12-6 loss to LaVerne on Wednesday.

Whittier’s Teresa Marchetti scored four goals in a 10-9 loss to Claremont-Mudd-Scripps on Wednesday.

Claremont-Mudd-Scripps’ Amelia Ayala netted four goals as the Athenas bested Chapman 9-8 on Monday. Anna Fry chipped in three goals to the Athenas’ 10-9 win over Whittier on Wednesday. Alex Szymczak scored three times in a 9-8 Saturday loss to LaVerne. Aracelia Aldrete put in her 100th career goal with two scores in the loss.

Chapman’s Argelia Diaz put in four goals in the team’s 18-9 loss to Cal Lutheran on Saturday. Audrey Hattori notched a hat trick in the Panthers’ 9-8 loss to Claremont-Mudd-Scripps on Monday.

VMI’s McKenna Imset put in four goals in a 12-7 loss to Villanova on Saturday. Emma Perez notched three goals amongst six scorers as the Keydets fell to Iona 11-10 earlier in the day. Imset turned in a hat trick in the team’s 21-3 loss to #18 Wagner on Sunday.

Grove City got four goals from Elizabeth Andrews and hat tricks from Abby Spicher and Tessa Leatherwood in a 12-10 win over Penn State Behrend on Saturday.

#13 Loyola Marymount got three goals from Hana Vilanova in its 9-5 win over #25 Cal Baptist on Saturday. Three other players – Morgan Molloy, Marialena Seletopoulou and Mollie Williams – put in two goals each.

#15 Princeton’s Maddy Damato notched a hat trick in the Tigers’ 10-5 win over #18 Bucknell on Sunday.

#22 Marist’s Grace Doerfler went 6-for-6, while Lauren Smith and Myriam Lizotte added four goals apiece in the team’s 26-8 win over Villanova on Sunday. Anais Mathes and Katherine Tijerina supported the cause with hat tricks. Mathes tallied four goals and Tijerina added three in a 13-5 win over Iona on Sunday. The Red Foxes saw 11 players score in the team’s 16-8 win over St. Francis Brooklyn on Saturday, led by Doerfler’s hat trick.

The Cal State East Bay Pioneers got three scores from Cheyenne Pena in an 11-7 loss to Cal State Northridge on Friday.

LaVerne got hat tricks from Guarina Garcia and Jassmine Kezman in a 12-6 win over Cal Tech on Wednesday. Garcia also notched three goals as the Leopards topped Claremont-Mudd-Scripps 9-8 on Saturday.

Occidental’s Monica Chernoff scored three of the Tigers’ five goals in a 15-5 loss to Whittier on Saturday.

Kelsey Snelgar posted a hat trick for St. Francis Brooklyn, but it was not enough in the Terriers’ 16-8 loss to #22 Marist on Saturday. Renata Tate and Erin Gonzalez put in three goals apiece in a 9-8 loss to Siena on Sunday.

Utica’s Daniela Hannah put in three goals in a 12-4 win over Connecticut College on Saturday.

Paige Adams scored three goals for Washington & Jefferson in the team’s 14-5 loss to Wittenberg to open the CWPA Division III Championships on Friday.

Player of the Week: Elyse Lemay-Lavoie, Hawaii – Scored a game-high four goals in the Rainbow Wahine’s 15-9 win over #11 UC Santa Barbara; drew three exclusions and had one field block as Hawaii clinched a share of the Big West title

Offensive Player of the Week: Eliza Britt, Princeton – Posted a pair of hat tricks as the Tigers topped Brown 8-4 and #21 Bucknell 10-5, helping Princeton grab the #2 seed in the CWPA Championships

Defensive Player of the Week: Heidi Ritner, Michigan – Made 23 saves and added two assists and three steals in a 3-0 weekend; allowed just nine goals on the weekend; made season-best 14 saves in a 17-2 win over #18 Harvard, which marked her 100th career start; notched five saves in a 16-6 win over #21 Bucknell and four in a 14-5 win over George Washington; moved past the 700-save plateau for her career

Player of the Week: Hana Vilanova, Loyola Marymount – Scored a team-high three goals and drew an exclusion in a 9-5 win over #25 Cal Baptist; added a goal, an assist, an exclusion and a steal in the team’s 15-8 win over Concordia (CA)

Defensive Player of the Week: Carson Horvatich, Marist – Made 43 saves in four wins; notched a .782 save percentage; blocked 15 shots each against Iona and Villanova

Rookie of the Week: Sophia Diaz Alvarez, Wagner – Tallied 13 goals and added two assists as the Seahawks went 4-0; scored her 100th goal of the season; racked up 13 steals and posted a .625 shooting percentage

Player of the Week: Aria Fischer, Stanford – Scored a career-high five goals in the Cardinal’s 13-12 win over #4 Cal

Newcomer of the Week: Bayley Weber, USC – Scored two goals and added a steal and drawn exclusion in the Trojans’ 17-3 win over #10 Arizona State

Offensive Athlete of the Week: Teresa Marchetti, Whittier – Scored seven goals and added three assists and three steals on the week; put in four goals in a 10-9 loss to Claremont-Mudd-Scripps; notched three steals in a 15-5 win over Occidental

Defensive Athlete of the Week: Kelly Grosswendt, Redlands – Made eight saves in 29:08 of play in an 8-3 win over Occidental; finished the game with an .800 save percentage

Player of the Week: Sam Witt, Fresno Pacific – Led the Sunbirds with six goals, including the sudden death game-winner in a 15-14 win over Cal State Monterey Bay on Saturday; added two steals, two assists and a drawn exclusion