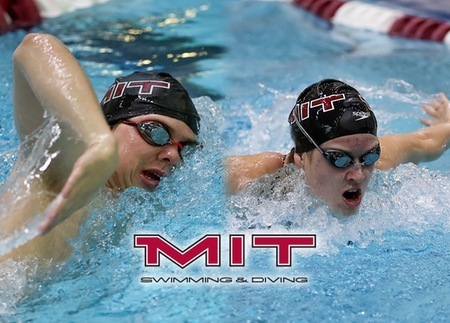 The MIT men's and women's swimming and diving programs have released their schedules for the 2018-19 season which will feature five home dual meets, the annual three-day Winter Invitational and the 2019 NCAA Division III Northeast-North Diving Regional. Current photo via MIT Athletics

Cambridge, Mass. – The MIT men’s and women’s swimming and diving programs have released their schedules for the 2018-19 season which will feature five home dual meets, the annual three-day Winter Invitational and the 2019 NCAA Division III Northeast-North Diving Regional. The Engineers will be under the guidance of fourth-year Mary Frances Wagley ’47 Head Coach Dani Korman.

After competing in their Alumni/ae meet on Saturday, October 20, the Engineers will host Division I Yale University for the first time in program history on Saturday, November 3 at 11:00 am. The following Saturday, MIT will host New England Women’s and Men’s Athletic Conference (NEWMAC) foe Springfield College at 1:00 pm. MIT will round out November with a trip to Bowdoin College where the Engineers will compete against the host Polar Bears and NEWMAC rival WPI at 12:00 pm.

The second half of the schedule opens with the three-day MIT Winter Invitational which will take place in Cambridge from Friday, November 30 through Sunday, December 2. After the Invite, the Engineers will return to dual meet action at the U.S. Coast Guard Academy on January 12. The final three regular season meets will take place at home and will feature Williams College and NYU on January 18, Tufts University on January 25 and Amherst College for Senior Day on February 2.

At the end of February, MIT travel to WPI for the four-day NEWMAC Championship as the men’s team will be competing for their 11th straight title and the women’s team will by vying for their ninth straight No. 1 finish. The Engineers will round out the year in hopes of sending student-athletes to both the NCAA Division Northeast-North Diving Regional, which will take place at home on March 1 and 2 as well as to the NCAA Division III Championship, which will take place at the Greensboro Aquatic Center in North Carolina from March 20-23.