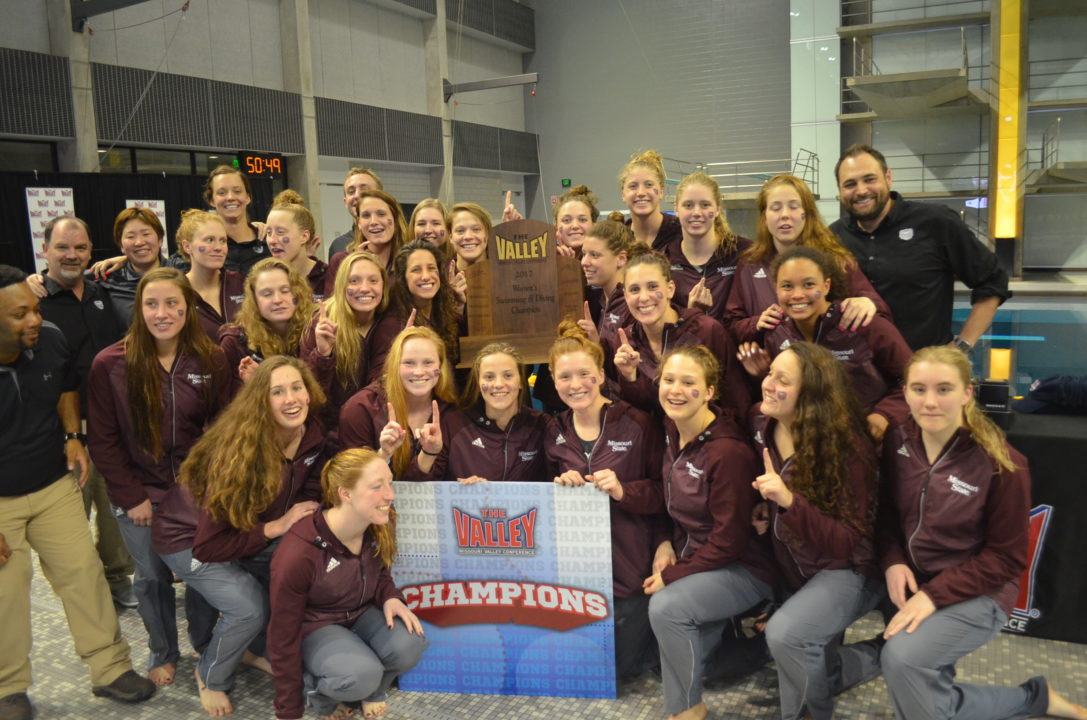 The Missouri State Bears have won their 13th MVC Crown since 2003, in a meet that saw Conference Records fall in 11 out of 20 events. Current photo via Derrick Dockett

Iona College won both the men’s and women’s meets against Pace, winning almost all 28 events against the Division II team.

William and Mary Adds Logan McDonald to Class of 2026

McDonald will bring immediete scoring potential to the Tribe when he comes to Williamsburg as a part of the school’s class of 2026.

To say that the MVC is a much improved conference would be an understatement.  The addition of Indiana State this year, and the recent rise of Northern Iowa as a strong contender are just two factors that have lifted the Missouri Valley Conference to a new standard, but those details are only a part of the larger picture.  The friendly rivalries that are always underlying, and the rising strength of all teams within the league, have made the excitement of the Missouri Valley Championship build exponentially, with MVC Records broken in 11 of the 20 events offered in 2017.

In 2016, the MVC title was won by a half point, when SIU halted Missouri State’s Championship streak in the most heartbreaking way possible.  This year the Bears came back with a vengeance, renewing their ownership of the MVC Crown with a 183.5 point victory, setting six MVC Records along the way, led by Senior Lauren Pavel who earned Swimmer of the Meet honors with her three individual record setting victories.  This was the 13th victory for the Bears since 2003, and the 4th under Head Coach Dave Collins’ lead.

Final day action saw three of those new MVC Records, including a second mark set by Freshman Swimmer of the Year from UNI, Katie Taylor.  Northern Iowa ultimately did not have the depth to contend for the team title this year, but were nearly equal to the Bears in the impressive scope of their 2017 achievements, setting three individual and two relay MVC Records over the four day competition.

In true Saluki fashion, the pair of Bryn Handley and Lauren Stockton took the 1-2 sweep of the mile to claim big points for SIU.  This was the third individual win for freestyle standout Handley, who just missed the MVC Record in the 200 freestyle earlier in the meet.  UALR’s Tori Fryar, realizing she had a chance, blasted a 27.76 final kick in the event to overtake UNI’s Kylie Engstrom by .05 for the third place finish.

The 200 back continued a recurring trend for 2017, with yet another record broken by more than one athlete below the previous mark. Sarah Allegri led by two tenths at the halfway point, but neither her or Bears teammate Sydney Zupan could match Katie Taylor‘s 1:00.18 back half.  Both Allegri and Taylor were below the 1:57.59 MVC mark set by the Bears’ Anna Ahlin in 2014, with Zupan remarkably close as well.

Northern Iowa’s Molly Lembezeder and Crystal Florman repeated their 1-2 sweep of the 100 freestyle, cementing their dominance of the sprint free for the second year in a row.  This was Lembezeder’s second title of the weekend after turning in the only sub-23 second time in the 50 earlier in the meet.  MSU’s Loretta Stelnicki settled for third place by just .14, matching her place for the 50 free where she was edged out by just .09 behind Runner Up Danielle Freeman from Evansville.

Leading a 1-3 sweep for the Bears, Lauren Pavel continued her impressive streak by cutting well over a second from the 2:13.77 MVC mark set in 2013 by fellow Bear Renata Sanders.  This victory for Pavel was made all the more fulfilling after finishing Runner Up at the 2016 MVC meet by a disappointing .11 to UNI’s Veronica Herrmann, and is over a three second improvement from her MVC performance last season.

In 2016, Emma Wall made a big move-up in the finals of the 100 fly to steal the MVC Crown.  This year in the 100, she swam a full second faster than the time in that victory, yet had to settle for third place behind teammate Zupan and MVC Record Breaker in the event, UNI’s Crystal Florman.  Wall would turn that into motivation to claim the title in the longer butterfly event, improving three seconds in the event over the course of the last year, and moving up from a 4th place 2016 finish to an MVC Crown in 2017. SIU’s Audrey Snyder improved her season best by 2.27 to move up from her 4th place original seed to her impressive Runner Up finish as well.

Missouri State Senior Alexis Skiniotes would not have been picked to win the 3-meter diving event in any pre-season poll.  In 2016 she finished 10th place on the 3-meter board, and not many would have expected such a tremendous improvement in her last season of MVC Competition.   This was her first ever MVC title and will be remembered as a most spectacular way to end her diving career as a Bear. Northern Iowa scored three divers in the top 8 places for this event, making it a strength for the Panthers in helping them to work their way up the Valley.

The UNI Panthers didn’t just repeat as MVC Champions in the 400 Free Relay– they also broke the MVC Record for the second year in a row.  The team of Taylor (51.38,) Florman (50.57,) Afton Phyfe (50.70,) and Lembezeder (49.36) combined to cut 1.55 from the mark they set in 2016, taking clear ownership of the event by touching over two seconds ahead of any other competitors.  The Bears managed to hold off the Saluki’s in spite of an impressive 50.02 split from Bryn Handley who gave her best attempt to mow down Missouri State anchor Stelnicki who gave their best split at 50.15 for the second place finish.

UNI has been on the rise since they brought on Doug Humphrey! Go CATS

Amazing how many records were broken, but also the pr’s, all the way down the line. Just a very fast meet. I wonder if the venue contributed. The iowa facility is world class.

I am sure that the facility contributed some, but honestly I think that there is a growing level of pride and legitimacy in mid-major swimming and a changing landscape for the sport that is helping some of these schools to be able to recruit better athletes into their programs. I also have no doubt that the coaches in the MVC should be considered among some of the best in all of Division 1.