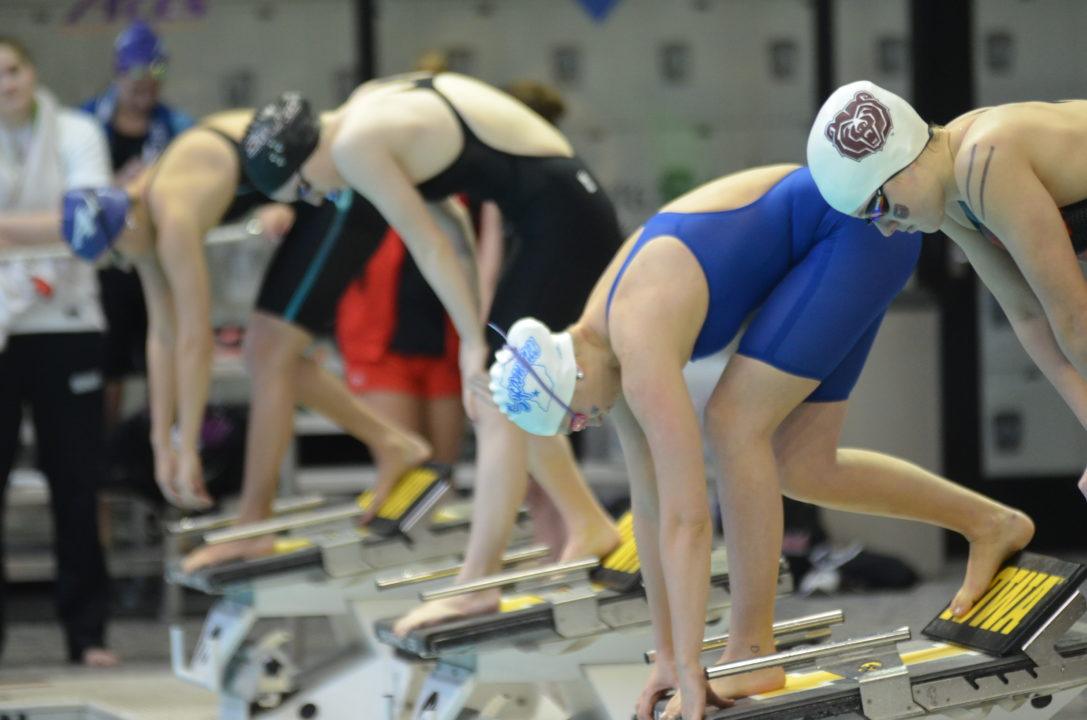 Five records were broken on day three of the 2017 MVC Championship. The only event that was not a new record was missed by just .06. Current photo via Derrick Dockett

The third day of finals at the 2017 Women’s Missouri Valley Conference Championship saw MVC Records broken in five of the six events offered.  Two of those events had more than one athlete below the fastest time that had ever previously been performed in the fourteen year history of the Conference, and the only record not broken in the session was missed by less than a tenth of a second.

Katie Taylor had been under the MVC Record in the 200 IM earlier this weekend, but as Runner Up in the event she never laid claim to the mark.  With her 400 IM win she brings ownership of this event to the Panthers as her time lowered the 4:18.32 set by the Bears’ Rebecca Amparano last year.  Missouri State took the next two places on the podium, helping them to continue building their overall lead.

Claiming another MVC Record for the UNI Panthers, Crystal Florman lowered the 54.77 mark set in 2013 by Illinois State’s Jeanette Nolte. She was not alone in dipping below the old record though, as Missouri State’s Sydney Zupan was also ahead of that time.  Emma Wall, the 2016 Champion in this event, joined them below the 55 second barrier as well at 54.88.

The 200 Freestyle was the only event of the Friday evening session that did not see a record fall, but it was not for lack of trying.  SIU’s Bryn Handley narrowly missed the 1:47.82 mark set by Saluki teammate Kelsey Walker in 2015, falling just .06 short. Handley won the event by nearly two seconds, joined under 1:50 by UNI’s sprint star Molly Lembezeder

Missouri State’s Lauren Pavel took down her second individual MVC Record, slicing .66 from fellow Bear Renata Sanders‘ 2014 mark of 1:01.45 in the 100 breast. Jensen Keck made a significant drop to claim second place for the Redbirds, while 2016 Champion, Veronica Herrmann rounded out the podium with third.

Once again, two athletes were below the MVC Record, and this time both were Bears.  MSU’s Sarah Allegri and Sydney Zupan each touched below Anna Ahlin’s 54.38 from 2014, with Zupan coming from behind to take the win on a 27.61 back half split.  They were joined below 55 by Illinois State’s Rachel Root at 54.60.

Just two days after taking the 200 Medley Relay below the 1:40 mark for the first time in MVC history, the squad of Allegri (54.35,) Pavel (1:00.78,) Zupan (53.79,) and Loretta Stelnicki (50.21) took over three seconds from the previous fastest 400 Medley Relay, dropping it below the 3:40 barrier for the first time as well. Northern Iowa’s team of Taylor, Herrmann, Florman and Afton Phyfe held off the Saluki team of Sarah James, Laura Carver, Emma Brazeau and Handley, going 3:43.50 and 3:45.31 respectively to round out the relay podium.