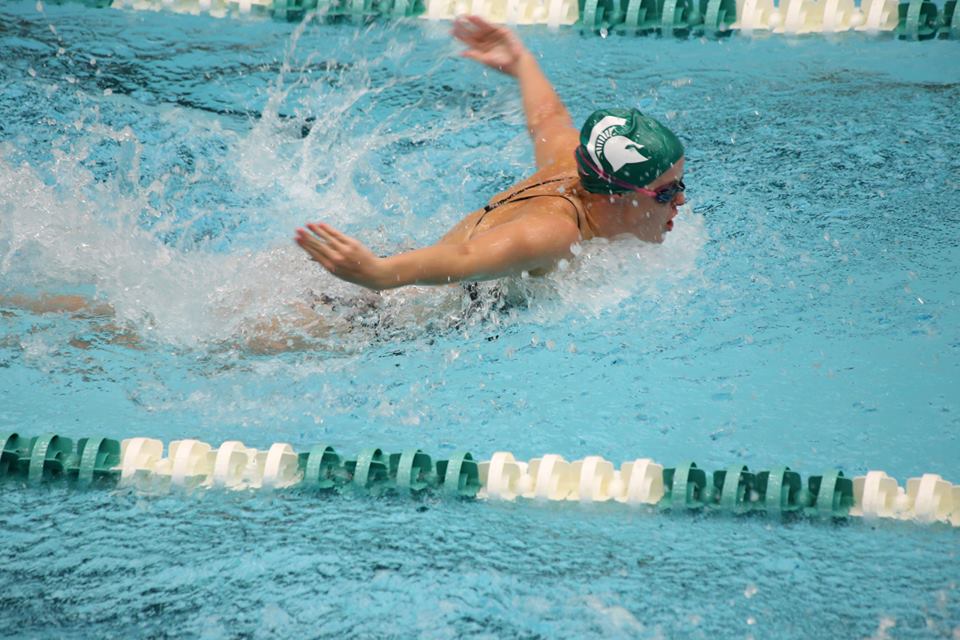 Michigan State won their dual meet against Illinois, despite only winning 6 of 16 events. Stock photo via Michigan State Swimming and Diving

Cisternas set program and pool records as the Nittany Lions fell to Virginia Tech on the weekend.

Michigan State vs Illinois (Women Only)

Michigan State’s only double event winner was Morgan Wellenzohn, who won the 1 and 3 meter diving. The Spartans still managed to win the meet by going 1-2 and 1-2-3 in a couple events.

EAST LANSING, Mich. – The Fighting Illini women’s swimming and diving team set off on the road for the first time this season, as the team faced off against Michigan State on Friday, October 20. The Illini came up short to the Spartans, 162-136, to fall to 1-1 on the season.

“We dug ourselves into a big hole through the first seven events,” head coach Sue Novitskysaid. “The team responded through the second half of the meet, but it was too late. Depth was going to be very important for us to be successful. We won the majority of the events, but did not capitalize on our chances.”

Despite coming up short in the first event of the night, the Illini followed by winning the next three events, including the 1000 freestyle, 200 freestyle and 100 backstroke. Sophomore Monica Guyett got things started for the Orange and Blue, finishing with a 1000 freestyle time of 10:25.70. Senior Samantha Stratford earned the victory in the 200 freestyle, touching the wall in a time of 1:49.60, while freshman Michelle McCord won the 100 breaststroke with a time of :56.41.

Senior Ashley Aegerter and junior Megan Vuong also earned top times. Aegerter finished with the top 200 breaststroke time of 2:20.75, while Vuong touched the wall first in the 100 butterfly, swimming a time of :55.67.

“We have to continue to put the work in each day,” Novitsky said. “Even more so, we have to be diligent with our habits and attitude each day. As coaches, we are seeing good things in practice and now we need to carry that effort and aggressiveness into our competitions.”

Junior Madeline Kuhn was the lone diver to compete for the Illini, earning top-three finishes in both 1-meter and 3-meter competition. The Bloomington, Illinois, native posted a 1-meter score of 250.87 to place second in the event. She also came away with the third best 3-meter score of 267.60.

EAST LANSING, Mich. – The Michigan State women’s swimming and diving team picked up their its Big Ten win against Illinois today. The Spartans won 162-136 in their first home meet of the season.

“I thought competitively we did really well. It was great to compete in this new facility, with the renovations and everything. I’m happy. It’s not easy to win, especially in the Big Ten,” head coach Matt Gianiodis said. “I think more importantly, a lot of our people finishing second, third and fourth and getting points for our team, really contributed to the win.”

The 200 medley relay team of Cathryn Armstrong, Ana Sortland, Iana Wolff and Racheal Bukowski began the meet with a first place finish, clocking in at 1:44.11.

Big Ten Diver of the Week Morgan Wellenzohn won both the 3-meter and 1-meter dives with scores of 287.75 and 261.22, respectively. Erin Neelyscored a 280.80 and placed second in the 3-meter. Both Wellenzohn and Neely qualified for NCAA Regionals with their scores today. In addition to the pair, freshman Amanda Ling qualified with her score against Iowa and Northern Iowa on Oct. 6.

Ana Sortland won the 100 breaststroke with a 1:03.45. Ellie Roche and Erin Szara picked up second and third place finishes in the same event.

Racheal Bukowski won the 50 freestyle with a 23.69. Macy Moore picked up the second place finish in the same event with a 24.12.

Haley Kornburger and Becca Hannon picked up second and third place finishes, respectively in the 1000 free. Kornburger clocked in at 10:30.17 and Hannon did at 10:34.07.

Cathryn Armstrong finished second in the 100 backstroke, touching the pad at 56.78. Madison Nowak placed third in the same event, with a 58.64.

The Spartans will host their 62nd annual alumni meet Saturday, Oct. 21 at 11 a.m. at IM West. They will be back on the road on Oct. 27 at Pittsburgh with James Madison and Miami (Fla.)