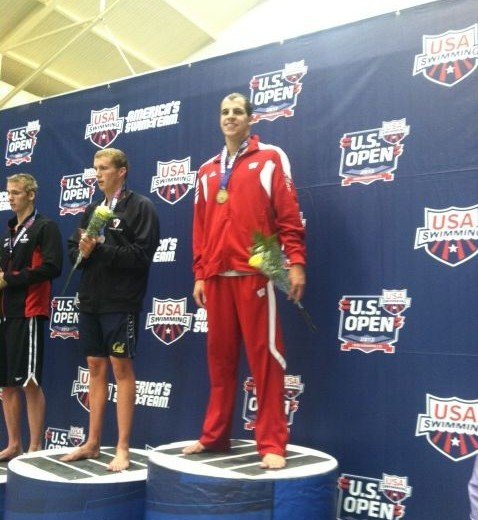 Wisconsin Badger Michael Weiss is officially a member of the nation's elite swimmers with a National-Team worthy swim at the U.S. Open. (Photo Courtesy: Ivy Martin)

Day 3 of the 2012 U.S. Open in Indianapolis, Indiana rolled through a quick finals (which shows just how much time semi-finals take up at meets like the Olympic Trials).

As is often the case when Shiwen Ye isn’t involved, the breaststroke was the separator in this women’s 400 IM. USC’s Meghan Hawthorne and Texas A&M’s Sarah Henry were dead-even after two legs, but Hawthorne was just a little bit better on the breaststroke (1:19.28-1:19.80), which was just about the difference in the race.

Hawthorne, who will combine with Stina Gardell next season to try and fill the prodigious IM shoes of graduated Trojan Katinka Hosszu, won in 4:40.43. Henry was 2nd in 4:40.90, which just misses her lifetime best. After a huge time drop in the 800 free on day 1 of this meet, she hasn’t been as strong for the rest of this meet; however the 800 was her weakest race at Trials, so that might be representative of a different focus in the 5 weeks of training since, or just a different level of strain caused by the Trials.

14-year old Becca Mann was much better than in prelims with a 4:43.07 for 3rd, followed by high school senior Celina Li in 4:44.29. Li is easily the country’s top IM recruit after making the finals of the 200 IM at the Olympic Trials; she further cemented that status by dropping almost two seconds in this longer distance.

Meet-after-meet, Wisconsin Badger Michael Weiss proves that he’s a budding star in USA Swimming. A year ago, he was basically an unknown even to the swim geeks. After placing near the top of the standings at major-meet after major-meet, though, Weiss finally can put “National Champion” next to his name. He won the men’s 400 IM on Thursday in a new best time of 4:15.79. In this race, he broke his own Wisconsin LSC record, and is now 5 seconds better than anyone in the history of that state. But more significantly, that time puts him into the top-25 in the world.

Weiss is the 5th-fastest American this year, and sits at the top-end of the second-tier of 400 IM’ers in this country with swimmers like Chase Kalisz (behind the elite group of Phelps, Clary, and Lochte, of course).

In 2nd was Cal sophomore Adam Hinshaw in 4:17.91. He is by no-means a new name to those who follow the junior ranks of swimming, but he’s showing that he’s not tapped out despite lofty results in high school. That time bumps him to 6th all-time on the US 17-18 list. He had an outstanding breaststroke leg, splitting 1:14.07. That’s compared to a 1:15.9 at Trials. Remember that in Omaha, this was his first swim of the meet for a young swimmer, whereas by comparison this U.S. Open is a much more relaxed atmosphere. Here. he also had the opportunity to coast a bit more to earn a final. This was the swim that we didn’t get to see in the evening at Trials.

Indiana’s Stephen Schmuhl was 3rd in 4:18.74, followed by the top international finisher Matthew Johnston of the UK in 4:18.93.

T2’s Erika Erndl made her second podium of the meet when she won the women’s 100 fly with a 58.75. That’s a new lifetime best for her at 34-years old: a rare accomplishment in swimming. The sprinter closed this race very well – in fact, she had the best closing 50 in the field. That includes pulling away from 200 fly champion Kelsey Floyd on the turn, as Floyd finished 2nd in 58.98.

Jasmine Tosky was 3rd in 59.45, followed by Auburn’s Olivia Scott in 59.50 and UCLA’s Bianca Casciari in 59.53. The winner of the B-Final was future Cal Bear Kelly Naze in 59.97. That’s a sub-minute result for a swimmer who, last summer, was diagnosed with a serious back condition called spondylosis, which is a degeneration of the joints in her spine. She will be battling some combination of Rachel Bootsma and Cindy Tran for the spot on the Bears’ medley relay next season, though in reality they have enough pieces to use a lot of different swimmers at NCAA’s on those relays.

Three swimmers broke 53 seconds in this race, and among them was event champion Kenneth To in 52.65. That’s another best-since-2009 swim for him after recovering from appendix surgery before Australia’s Trials.

Behind him in 2nd was the top-finishing American Kyler van Swol of Michigan, in 52.89, with Big Ten rival Daniel Lester from Wisconsin (and Australia) placing 3rd in 52.93.

Jack Conger, headed into his senior season, continued to improve his diversity with recruiting on the horizon and a 53.04 for 4th. That just out-touched Swiss swimmer Nico van Duijn in 53.05, For Duijn, however, he re-broke his Swiss National Record set this morning. In all, he took the record away from his country’s top swimming hero Dominik Meichtry by about four-tenths.

U.S. Open is not the National Championships. Weiss cannot claim to be a national champion when he wins the U.S. Open. That I am sure is down the road.

when you say hawthorne and gardell will try to combine to fill hosszus spot, you have to remember they are adding tosky and andrea kropp who are both excellent IMers.

itll be interesting to see what events jasmine chooses to swim in NCAAs…she could litterally do anything. (200 IM-200fr-200 fly) i think fits her well, but she could also throw in a 400 IM, either of the breaststrokes, or the 100 fly anywhere and still score at NCAAs….her versitility is sooo impressive and very overlooked! definatly the best catch of the class.

Any word on if Ress is going back to Indiana or if he is going pro?