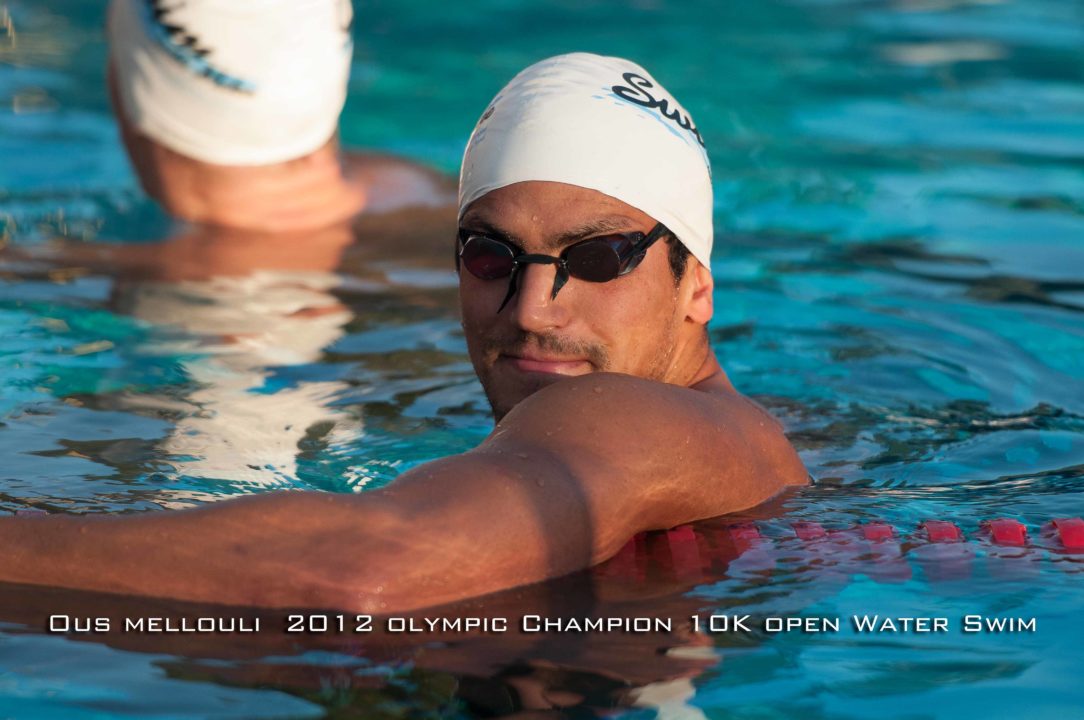 The men came out charging in the 10K open water swim in the Serpentine Lake in London’s Hyde park.   Tunisia’s 2008 Gold Medalist and 2012 Bronze medalist Ous Mellouli set out to push the group and led most of the way setting a blistering pace – averaging 1:05 per 100m.   The pace dropped significantly on lap two and things ere much more bunched up with the pack sometimes more wide than deep.

This all changed on the 3rd lap as Mellouli again picked up the pace.   At the mid point of the race the swimmers were averaging 1:07.   2008 Olympic Coach John Dussliere noted that the pace Beijing was actually faster at this point in the race.

German’s Andreas Waschburger started really hammering down on the 5th lap and looked as though he might break away heading down the back stretch.

Ous Mellouli made his move about two thirds through the 5th lap and took four other’s with him.   It was clear at this point the Mellouli’s pool strength transferred very well to the 10K.  Mellouli skiped the feed on the 5th lap and that was the move that closed the deal.    A clear pack of 3 follow Mellouli and undoubtedly being the last on in that group would hurt.    Yet as the final lap progressed it become more and more clear that this was Mellouli’s race to lose.   With 800 meters to go Richard Weinberger (CAN), Thomas Lurz  (GER) and Spyridon Gianniotis  (GRE)were racing for the 2nd position – or perhaps more likely, racing not to get 4th.

In the end Ous Mellouli simply owned this race .    His final lap was at a 1:05/100m pace.   Open water veteran Thomas Lurz won the silver -bettering his Beijing result by one spot – and became the first man two win 2 Olympic medals in open water swimming.   And is was Canada’s Richard Weinberger sliding into the bronze proving his win at the 2011 test event was no fluke.   Mellouli’s win brought two open water medals back to Trojan Swim Club where both he and yesterday’s silver medalist Haley Anderson train.   This was also his second medal of the games – he won the bronze in the 1500m free.

What luck they lightened the criteria for drug users twice .

Ehat a great day for the motor heads of pool swimming! All those workouts doing endless laps at a heavy pace, really paid off. Thanks Ous from the motor pool

Well Josh – I actually do train our Long Sprint swimmers at USC and Trojan Swim Club. Coach Vogt provides our OW swimmers with the strategies for success in the OW.

Whoah! Doc Salo, is it possible to find/ buy a copy of “Sprintsalo” anywhere? Been lookin’ for it forever! FOREVER!

Both coach Salo and Catherine train the distance swimmers.

Salo doesn’t train the swimmers who do open water, Catherine Vogt does, and I’m pretty sure they put in some volume.

Would love to hear what they did the two years leading to the games. Chances are the volume was up, you need SOMETHING to finish a 10k after all, but my expectation is that it wasn’t ridiculous. Congrats Ous!

Congrats to Ous and Sprint Salo!!!

“Would love to hear what they did the two years leading to the games. Chances are the volume was up” –

Care to expand on your position? Perhaps you know more about Dr. Salo’s training Ous for the 10K?

Obviously you have never observed Melloui’s high altitude training sessions in France — there anything but LOW VOLUME.

I hope more “pool-only” swimmers follow Ous’s lead. What an awesome double between his exceptional pool 1500 and this blistering 10K. With OW 10k gaining popularity, Sun Yang, and young female stars like Ledecky, could we be finally seeing a resurgence of interest in distance swimming?

I suspect that it’s still going to be uncommon to see a swimmer in both the 4×100 FR and the 10K in the same world level meet.