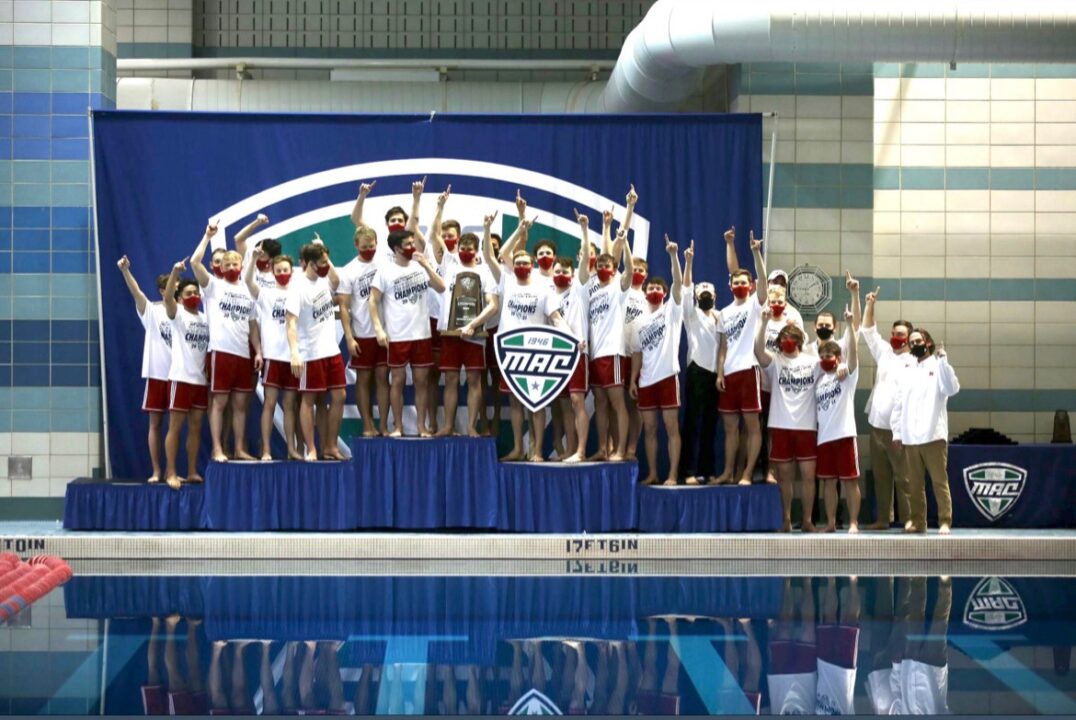 Miami Ohio University earned a slight lead on day 1 which kept growing through day 3 when the Redhawks won the title by a substantial lead of 245 points. Current photo via Hollie Bonewit-Cron

The host Miami Redhawks claimed victory on Saturday at the 2021 Mid-American Conference Championship, defeating the defending champions, Missouri State, who finished in 2nd place. This is the Redhawks’ second MAC Championships title in 3 years under head coach Hollie Bonewit-Cron. Their 2019 victory was their first MAC Championship title since 2009.

Miami increased their 182-point lead after day 2 to a substantial lead of 245 points, considering they lost a few transfers during the past few seasons including MAC Conference Record holder Kayky Mota and butterfly specialist Iago Moussalem. For context, they won in 2019 by just 58.5 points. And Missouri State claimed the 2020 MAC Championship title by a slightly larger margin of 80 points.

Miami’s relay of Duvenhage, sophomore Pedro Gueiros, and juniors Nic Wamsley and Ben Chatwin won the 400 free relay with a time of 2:55.35, coming within .10 of the MAC record. They finished a full second ahead of 2nd place finisher Southern Illinois. Wamsley clocked the fastest split on the relay (43.58), but it was Southern Illinois’ anchor Donat Csuvarszki who posted the fastest split in the field, 43.36.

Southern Illinois sophomore Adam Cernek brought the Salukis their first of 2 victories on Saturday night, taking 1st in the 200 back (1:43.17) and breaking his own school record from last season.  In the 100 free, Csuvarszki out touched Miami’s Chatwin by .21 to win the event with a time of 43.94.

On Friday, Ongay won the 3-meter event with a score of 310.55 points. His freshman teammate Isaac Hunter took 3rd place with 284.55 points while Spence finished in 2nd place with 291.30 points.

Kayky Mota and Iago both transferred 2 years ago, not this season as indicated

Does that make it better or worse that Miami was able to win by such a big margin? Imagine a few of this year’s champions will be looking for a new home soon, but that could be because they don’t know who their coach will be after HBC is officially announced at UF.

Missouri State did only have 12 out of the 18 possible scoring spots filled. Not makin excuses for them, but it does offer an explanation as to why the margin was so large.

Why would Missouri not have had their scoring spots filled? Can anyone explain that?

Their roster is already comparatively smaller to many college teams. Any/All of the following could be reasons: this year athletes had the option to opt out due to COVID, freshmen may have deferred enrollment because they felt they’d have a more definitive training environment at home due to the uncertainty associated with the pandemic, a few transfers after last season

Miami literally will have to win the MAC title from now until about 2045 to match the # titles the Eastern Michigan men have.

Congrats athletes & staff on a great meet and another title!