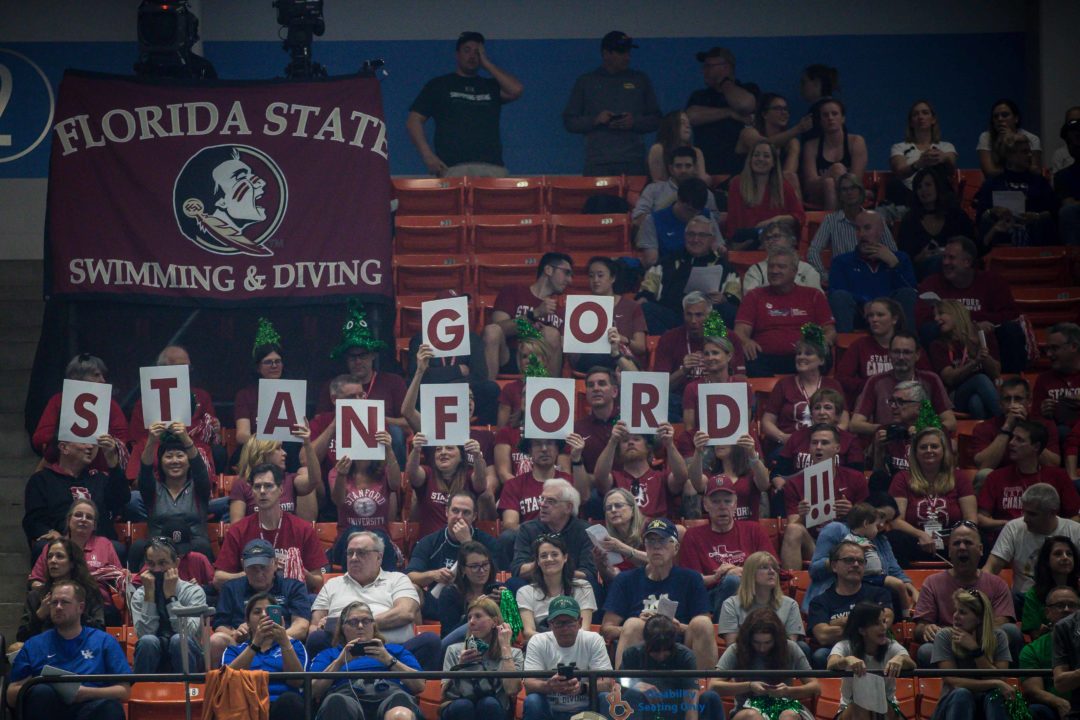 The Stanford men cruised to an easy win at the Pacific Invite, but the big news is less about times and more about key names returning for the Cardinal. Archive photo via Jack Spitser/Spitser Photography

The Stanford men cruised to an easy win at the Pacific Invite, but the big news is less about impressive times and more about some key names returning to action for the Cardinal.

Sprinter Alberto Mestre didn’t compete at all for Stanford last season and was sorely missed on relays in what would have been his sophomore season. But Mestre, now listed as a junior on Stanford’s roster, raced a full lineup at Pacific, winning the 50 free (20.49) along with three relays. Mestre split 19.8 on a medley, and was a good deal better on his 100 free relay splits (45.4 on a free relay and 45.0 on a medley) than he was individually (46.06 and only 4th overall).

Both Grant Shoults and Jack Levant dropped off last season with medical issues and didn’t swim NCAAs. The senior Shoults got two wins at Pacific: 1:38.09 in the 200 free and 15:03.12 in the mile. Shoults was about half a second faster in the 200 than he was at this meet in his last healthy season (2017), so the result bodes fairly well for Shoults’ fitness heading into his final NCAA season.

STOCKTON, Calif. – No. 10 Stanford’s 2019-20 season kicked off on Friday and Saturday with a win at the Pacific Invitational.

No. 10 Stanford hosts its Alumni Meet Oct. 25 at 5:30 p.m. PT followed by its annual Triple-Distance Meet against California in Berkeley, California, on Nov. 8. The Cardinal wraps up its fall season Nov. 21-23 at the Art Adamson Invitational in College Station, Texas.

STOCKTON, Calif. – The Pacific women’s swimming program had a convincing victory at its annual Pacific Invitational, which was hosted on Friday and Saturday at Chris Kjeldsen Pool.

The Tigers topped its opposing teams — Fresno Pacific and UC Santa Cruz — with a total of 1,169 points. FPU finished second with 708 points, followed by UC Santa Cruz with 665 points.

Pacific will take a two-week break before traveling San Jose State, Calif. for its meet against San Jose State and UC Santa Cruz. The program is set to being at 11:00 a.m. Heat sheets will be made available at pacifictigers.com closer to the meet date.

Diver, Mackaby Pennington traveled to California Baptist for the Lancer Diving Invite, where he finished second in both the one-meter dive (297.00) and the three-meter dive (324.65).

Pacific will take a two-week break before traveling to San Jose State for its neutral-site matchup against UC Santa Cruz. The program is set to begin at 11:00 a.m. Heat sheets will be made available at pacifictigers.com closer to the meet date.

STOCKTON – UC Santa Cruz’s swimming teams opened their 2019-20 regular season with stiff competition at the University of the Pacific Invite Friday and Saturday. On the women’s side, UCSC faced the host Division I Tigers and Division II Fresno Pacific, while the men’s competition added Pac-12 power Stanford University.

With Stanford winning the men’s competition and UOP in the women’s, the Banana Slugs focused on getting their young squad acclimated to college competition.

“This was our first meet, we’ve been training hard for about a month now and we are hitting the ground running,” said junior Paul Ogle-Sporer. “We’re all very excited to keep training hard and give it our all in future competition.”

The Slugs opened on Friday with the 200 medley relays.  In the women’s 200, the A team of Elisabeth Lundgren, Kenya Lam and newcomers Emily Claridge and Isobel Blue finished fifth in an encouraging 1:53.72, just 4.6 seconds behind winners from Pacific.

The men’s 200 A relay (Victor Sowa and freshmen Sanjay Srikanth, Joseph Guzman and Max Mueller) finished in 1:41.65, good for seventh place behind teams from Stanford, UOP and Fresno Pacific. Srikanth was also 7th in the 100 back in 55.48.

Freshmen continued to impress on Day Two. Ocelli Rivers-Alteri led UCSC finishing fifth in the women’s 200 free in 1:59.93, and Aly Roberts placed sixth 0.58 seconds after her.  Blue was sixth in her 50 free college debut. She finished in 25.62, one second behind the 1-2 duo from Fresno Pacific. Another highlight was Mueller was UCSC top swimmer in the men’s 50 free, in 22.79.

The Banana Slugs’ best finish Saturday was the women’s 400 free relay, where the A team of Rivers-Alteri, Paris Sinclair, Lam and Blue were 3rd behind the two UOP teams in 3:46.56.

UCSC gets back in the pool next Friday when they host the Slug Shootout against Biola, Cal State East Bay, Mills and the College of Idaho.

STOCKON, CALIF. – The Sunbirds traveled up to the University of Pacific to compete in the Pacific invite on Friday, October 17th and Saturday, October 19th. Fresno Pacific’s women came in second while the men placed fourth.

“The men and women both had some strong swims and finished in the top three against division one schools. We need to continue to work hard towards our season goals and with each meet it is bring us closer to those goals. There are a lot of things that we can still improve on but I am proud of our team and how they adjusted from the late Friday night session to the early Saturday morning session,” said coach Adrian Aleksandrowicz.

HOW IT HAPPENED
Women

Good to see Grant and Jack back

Gotta root for the Banana Slugs!

What a great mascot

First “W” of the Schemmel era!