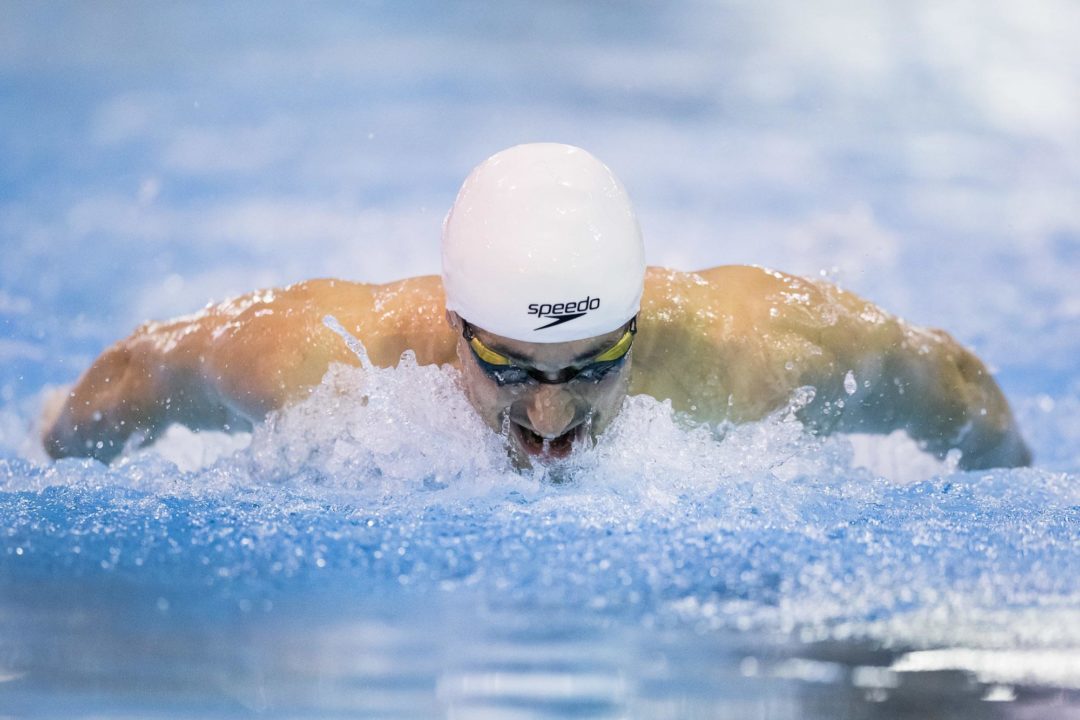 For many years, if someone asked “Who do you think will win the 200 m fly?”, most would answer “Michael Phelps” in a heartbeat. After all, Phelps does hold the World, American, and US Open records. With no true word on whether or not we will be seeing his name at future meets, it’s at least safe to say that he will be out of the running for this year’s World Championships.

Davis Tarwater and Mark Dylla, two other great contenders in the 200 fly, seem to be taking a break from the sport as well. Tarwater, who has not competed since December, is still active in the sport, working at swim clinics throughout the country. Dylla, who finished 5th at Omaha last year (1:57.84), has not been competing, and officially includes “retired swimmer” in his bio on his personal Twitter.

With some big names out of the way for this year’s World’s, it opens the field for others, like Tyler Clary. Clary, who finished second behind Phelps in Omaha (1:55.12), and fifth in London (1:55.06) is an active competitor and definitely one to look out for in weeks to come. At the Santa Clara Grand Prix, we saw him post a 1:58.53, but he has the potential to drop major seconds at World’s, seeing as his best is roughly 3-4 seconds faster when tapered. With Phelps out of the way, his long-time competitor, it may give him even more drive than he already clearly possesses.

An interesting one to keep your eye on is 16-year-old Justin Wright. Wright, a member of the Fresno Dolphins, had an amazing race in Santa Clara, and seemed to show no mercy to his big name competitors, finishing first with a time of 1:57.90. Wright was behind Clary at the third length, and turned it on on his last lap, bringing it home in a 30.02 (Clary split a 31.20). With his adrenaline going, and perhaps even more taper, it’s possible for him to be a force to be reckoned with at World’s.

Right behind Wright in Santa Clara was University of North Carolina swimmer Tom Luchsinger. In Omaha, Luchsinger was amongst the top seeds going into semi-finals in the 200 fly, holding a 1:57.74 from prelims. His time went up during semis, though, and he dropped to 12th place. At the 2012 US Open, he took home gold with a time of 1:57.51. More recently, Luchsinger has been able to maintain pretty solid times, just a second above his bests (1:58.26 in Santa Clara, 1:58.80 in Charlotte). Again, with all the hype and taper involved in World’s, we could be seeing a time drop from Luchsinger in a few weeks.

A name not to forget, though, is Bobby Bollier. Finishing third behind Phelps and Clary, respectively, in Omaha last year, Bollier posted a 1:55.79. While his times have been up since then (1:59.80 at the Mesa Grand Prix/2:00.00 in Santa Clara), we’ve seen what he can do. The Stanford graduate has been training hard this year, and he may be physically off of his game (for now), mentally, I believe he will have the drive and determination to post great results at World’s.

Dan Madwed has proved that he is another one to look out for at World’s. Posting times at the Grand Prix series that are just above his 2012 Olympic Trials time of 1:58.36 (Santa Clara – 1:59.78/Charlotte – 1:59.60/Mesa – 2:00.22) can definitely compete, and has remained pretty consistent. 19-year-old Chase Kalisz finished right behind Madwed in Charlotte, placing fourth with a time of 1:59.73. Kalisz, who finished 40th in Omaha (2:01.92) has already shown improvement in his strength and endurance, lowering his splits in the last 100 m of the race.

Short Course Yard master, Tom Shields, shouldn’t be ruled out, though. This year at NCAA Championships, Shields posted a best time of 1:39.65 (yards), making him tied with Phelps for the 200 yard butterfly American Record. In Omaha, he finished fourth behind Phelps, Clary, and Ryan Lochte in the 100 meter fly (51.86), and continued on to finish ninth in the 200, just missing finals, with a time of 1:58.74. Though his time was up at Mesa, his strength is there, meaning that we could be seeing some nice drops from him as well.

Andrew Seliskar, who shook-up Age Group breastroke records, is also a contender in the 200 fly. In Charlotte, took 5th at finals in a 2:00.63, not too far behind Kalisz. He’s whole second under his time from Omaha, where he placed 38th. He was right behind Kalisz at the first 100 in Charlotte (only .02 seconds divided the two). If he could just bring his splits in his final leg of the race down a bit (easier said than done, I’m sure), he could be right there.

Swimming veteran Michael Klueh has also been posting some note-worthy times since Omaha. Klueh, though never a member of the Olympic team, has been a name to remember in the freestyle events. Only a few days after competing at trials, he began training again in Michigan. More recently, Klueh posted a time of 2:00.32 in Santa Clara (finishing 8th).

With many of these times close together, and the adrenaline pumping, we’re in for some good racing at World’s.

Nice article, wrong headline. It’s about the trials, not worlds.

Anyone else not seeing Justin Wright in psych sheet?

He actually alluded to this the other day on his Twitter. Looks like he’ll focus on qualifying for Junior Worlds instead.

That seems like a shame when he has a legitimate shot to make the Worlds team. Any experience on the Worlds team would be immensely valuable for him moving forward.

Amazing to write that but now the 200 fly is one of the weakest events in USA on the men’s side. Like the 200 fly on the women’s side. Amazing to write that after all the wins USA has known with Mel Stewart, Tom Malchow and of course Michael Phelps with his 5 world titles, his 2 olympic titles and his world records. But it looks like a few youngsters are coming so the hope is back for the next years..
Tyler Clary is the big favorite for the win. Behind him it’s very open. Again, like Mr Keith, I go with Tom Luchsinger who has swum good times recently. The 3 youngsters to watch are Corey Okubo, second… Read more »

Going to be a bit of a sad year for American fans of this race. I don’t see any Americans medalling, but hopefully one of these younger guys will qualify and get some good experience.

There’s no real chance of Lochte swimming this race, is there?

I do think Lochte would qualify easily in 200 fly if he decides to swim it.

Agree with u ASWIMFAN . Lochte is so talented he could do so well on 200 butterfly if he focused on that one . he has the power , the core training for years , the endurance ( IM’s provides huge endurance ) . Us new swimmers are coming on butterfly and it will take a while before they can challenge Chad LeClos and other stars .

Yes maybe but it’s gonna be a great year on backstrokes ( women and men ) . The depth on backstroke is just insanely owesome . Let’s just watch how well Clary and others will do anyway . Experiences on high stage are always welcome .

USA swimmers avoided that event for years, knowing that they’d have little or no chance to do much ‘damage’ to Phelps and it resulted with weak 200 fly once Phelps retired. It’s like when you have a giant tree that casts such a big shadow nothing can grow beneath…

This was also exactly the same situation in Australia with Hackett and Thorpe. And when they were gone, there was a dearth of middle and distance swimmers, to the the point that Australia did not send a single swimmer in 1,500 to London, and only now Australia has recovered a healthy strong 200-400-1,500 young swimmers.