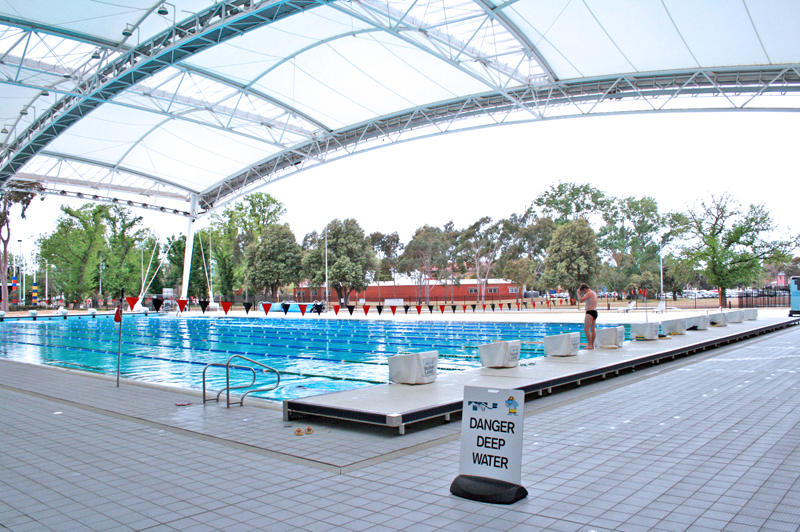 The outdoor pool at the Melbourne Sports and Aquatic Centre is covered, with an expanded 4,000-seat capacity thanks to a temporary grand stand. Stock photo via www.localfitness.com.au

Watch: Michael Andrew Goes Behind The Scenes At SC Worlds In Latest Vlog

Micheal Andrew takes viewers behind the scenes in his last few days of prep before the 2022 SC World Championships in Australia.

The Case For Short Course (Meters, of Course)

Despite short course meters becoming more and more prominent in the sport, USA Swimming continues to look the other way.

The 2022 World Short Course Swimming Championships will be raced outdoors at the Melbourne Sports and Aquatic Centre, with the adjacent indoor pool being used as warm-up and cool-down space.

The event will be held from December 13-18 in Melbourne, which was a late-chosen host after FINA was forced to remove the event from Russia earlier this year after Russia’s invasion of neighboring Ukraine.

While outdoor facilities were relatively-common in the early days of these championships, FINA has opted for the certainty of indoor venues more recently for all of their championships. Many, though not all, of those recent venues have been temporary pools inside larger sports arenas, or in the case of Dubai the reverse: a massive natatorium that can be covered by a floor to host other sports.

With an average annual precipitation total of about 20 inches, Melbourne is one of the driest major cities in Australia, with the month of December averaging just 2.4 inches of rain in the city.

Rain, though, becomes less of an issue given that both the pool and the grandstand in Melbourne’s outdoor pool is covered. That should make things a little easier on backstrokers as well.

The average high in December in Melbourne is 76 Fahrenheit and the average low is 57 Fahrenheit (24/14 Celsius), so evening sessions could be a little cool for athletes.

The typical 3,000-seat capacity in Melbourne’s outdoor pool is small by World Championship standards, though a temporary grandstand has been added to lift the capacity to 4,000 seats.

While a smaller venue, that’s not necessarily a problem based on recent attendance for this meet. A temporary pool in the 18,000 seat Etihad Arena in Abu Dhabi last year was almost-empty, though the ongoing COVID-19 pandemic impacted attendance there – it was unlikely to be close to full regardless. The 6,000-seat Hangzhou venue was pretty full, though, and Windsor did well in 2016 as well.

The ticket selling website Ticketek shows that weekend finals sessions are already close to a sellout, while midweek finals and heats sessions have more availability.

The Meblbourne Sports and Aquatic Centre opened in 1997, and the adjacent multi-purpose arena has played a host to professional basketball activities historically. The outdoor pool was opened in 2006 in time to host the 2006 Commonwealth Games and 2007 World Aquatics Championships, which included long course swimming among five disciplines.

Those World Championships set an attendance record with more than 215,000 spectators, though the pool swimming was held in a temporary facility in the much-larger Rod Laver arena.

Venue and capacity information, especially for early editions of these championships, are hard to come by, as are exact capacities of venues in swimming configuration. For example, we don’t know which of the Athens Olympic Aquatic Centre’s three pools (though we assume it is the indoor venue, given the March timing).

Great pool! It will be fun to watch.

Does any one know if the championships are being telecast in Australia, if they are on what tv station or platform?

channel 9 is airing it, with ariarne titmus, ian thorpe and giaan rooney on the commentary team.

Where in the world is this temporary grandstand going? Like on the other side of the pool? Because the existing grandstand already goes to the top of the shady thing.
Also Melbourne being considered a ‘dry’ city is interesting because it sure doesn’t feel like that

True, Melbourne is (in)famous for its reputation of “Four Seasons In One Day”. The weather at this time of year IS, usually, fairly good but certainly far from guaranteed.

Stock photo is very old– at least 10 years. Temporary grandstand on the visible side of the pool and large video screens at the turn-end together with greatly increased vegetation are providing some windbreaks. As to rain, the competition pool is well sheltered, not so spectators seated in the temporary grandstands. Take waterproof protection. If the weather is kind, it’s a great venue. The warm-up facilities are all indoor.

here is another picture, with the temporary seating in place: Can’t wait! They’re also creating an area on the pool deck for “VIP guests” (aka people who buy VIP tickets, not actual VIPs). I have one for the first night in the hope that I might get a good photo of some of the swimmers.

It’s either boiling hot or freezing cold at the outdoor pool there. Good luck.