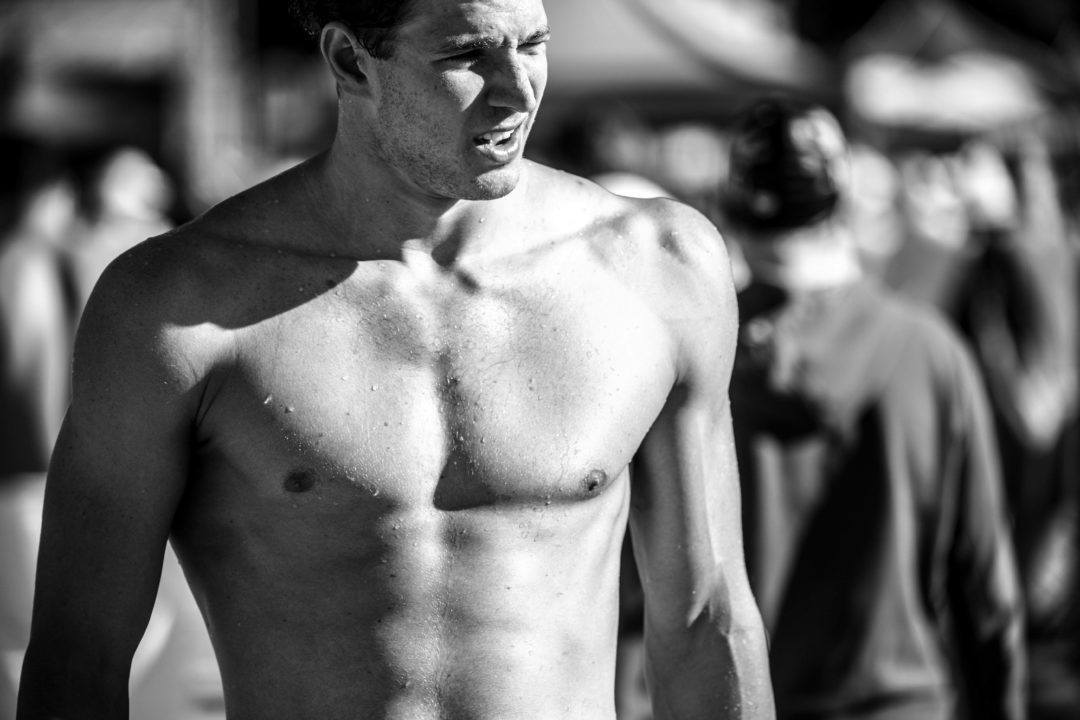 Meet first-time Olympian Ryan Murphy.  High school and college swimming fans have long witnessed his prowess with the Bolles School Sharks and Cal Bears, and following a double-gold performance in Omaha, Murphy is in the final stages of fulfilling the “future of American backstroke” destiny bestowed upon him years ago.  In his “Meet the Team” video, Ryan touches on his background, what he finds most rewarding about swimming, and an unorthodox way he used to deal with nerves before races (perhaps unintentionally).

More information on Murphy, courtesy of his official SwimSwam bio:

2013-2014
Murphy is in his second season as a Golden Bear at the University of California-Berkeley. Murphy swims under head coach Dave Durden and is one of the NCAA’s top backstrokers.  During his rookie campaign, Murphy was named the Pac-12 Newcomer of the Year and was a 2014 NCAA champion as a member of the Bears’ 200 free relay, American record 200 medley relay and 400 medley relay.  He also won the 100-yard backstroke (44.63) in a school record time and the 200 yard backstroke (1:37.35) in a NCAA record time as a rookie at the 2014 NCAA Championships.

2014-2015
Coming off of a stellar freshman season Murphy qualified for the NCAA Championships again. He started off the meet by anchoring the 200-yard free relay, and unsurprisingly had one of the fastest splits in the field taking his team to a silver medal. He advanced to the final of the 200-yard IM, and finished 5th overall with the help of a blazing first half. Murphy ended the day with a lead off leg of the 400 medley relay, which went on to win Cal’s second relay silver medal of the meet. His 100 back split nearly broke 44 seconds, and was a new NCAA Meet Record.

On day two Murphy started the finals session by swimming the backstroke leg of the 200 medley relay. His split of 20.64 was the fastest backstroke split of the meet, and helped Cal touch in first for its first relay gold of the meet. Just breaking the NCAA Record the day before, Murphy had plenty of confidence going into the 100 back. He had control of the race by the first 50 yards, but it was his back-half that blew away the heat to take gold, just .04 seconds away from re-breaking his records.

Having broken the NCAA Record in the 200-yard back in 2014 Murphy was a heavy favorite in the event. His first 100 yards was nearly another American Record, splitting 47.32, and held his pace for the next 100 yards to touch 1st about an entire second under his own NCAA Record. This time around however, he was under Ryan Lochte’s American Record set in 2007. To end the meet Murphy anchored the 400 free relay with a 41.17 second split to help Cal finish 3rd. He was named the NCAA, Pac-12 and CSAA Swimmer of the Year.

Interesting side note, Murphy was named co-swimmer of the meet, sharing the title with his former age group teammates, and Bolles Swimming alumni Caelab Dressel and Joseph Schooling.

2015 World Championships
At the 2015 World Championships, which were held in Kazan, Murphy was selected to the team to swim the 200-meter backstroke. Murphy moved on to the championship final, taking home a fifth-place in the 200-meter back. Where Murphy shocked was in the preliminary heat of the 4×100-meter mixed relay, where he led off in the backstroke leg. Murphy’s time was the number one in the world, and would’ve won the gold medal in the 100-meter event. His quick split was enough for him to take over the finals position in the 400-meter medley relay. Although he added about a second, Murphy helped the men win a gold medal.

Murphy qualified for his first Olympic Games in Omaha with a gold in the 100 meter backstroke. At the half way point he was in second place just behind David Plummer. Both were under world record pace and pulling away from the rest of the field, which included defending Olympic Champion, Matt Grevers. Murphy got to the wall first in 52.26, just 0.02 ahead of Plummer.

The 200 meter backstroke was owned by Murphy too. He pulled away from his Cal teammate Jacob Pebley at the halfway point and kept the lead the rest of the way, adding his second individual event for Rio.

Excellent job in the pool and such an intellect and high end speaker out of the pool. You make USA proud young man! Congrats!!