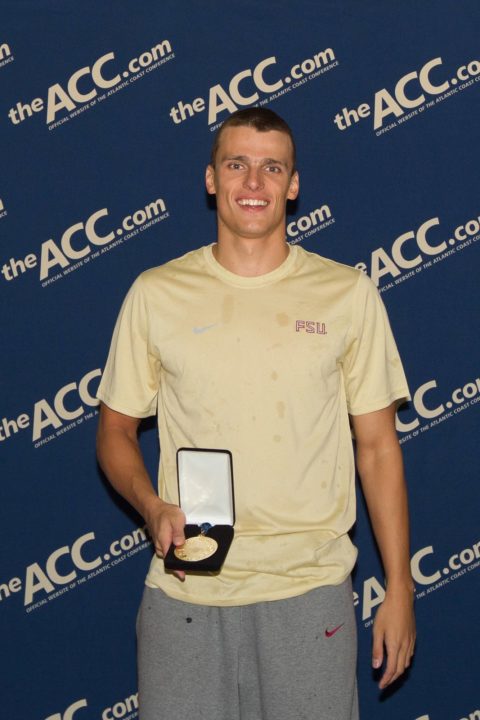 The ACC Champion Pavel Sankovich is having a very strong start to his first full season in the United States. photo via Tim Binning/TheSwimPictures.com

Both Alabama and Florida looked very good in their big cross-border dual meet in Tuscaloosa on Friday, with the ‘Bama women defending home turf 167-133 and the Florida State men leaving town having won by a margin of 179-121.

The Alabama women have a few really good pieces left over from the Eric McIlquham era, combined with a very good first Dennis Pursely recruiting class, and are set up for a very good season.

The Crimson Tide may have found their anchor, though, in Justin Panian, who split a 22.64 to close the B relay. That’s a huge split from a sophomore who’s never flat-started under 23 seconds.

Note: the Alabama medley orders as listed on the official results are incorrect.

In the women’s 200 free, Alabama was back on top with a 1:49.62 win from Saunders. She had a great kick coming off of the final turn of her race, though she was already well ahead of runner-up Julia Henkel of Florida State (1:52.07).

Florida State’s ACC Champion sprinter Tiffany Oliver broke the streak with a 23.10 in the 50 free, beating Vourna and her 23.58. Vourna, who was an Olympic semi-finalist in the 100 fly, won that race at this meet with a very strong 55.19.

Those two-straight wins are as close as Florida State would get, though. Kinsey completed a backstroke sweep, winning the 200 back in 2:03.06, and Burchell did the same in the backstrokes, taking her 200 in a 2:15.78.

There were a lot of double-event winners at this meet (which can be a sign of a lack of overall depth in these duals), as Madison Jacobi won again in the 500 free with a 4:54.66, beating MacDonald’s 4:55.11.

Burchell was the event’s only triple individual winner, swimming a 2:03.77 to take the 200 IM.

The biggest surprise of the meet was Alabama tipping Florida State in the meet-closing 400 free relay 3:25.33-3:26.17; Florida State, however, was without Kaitlin Dressel who looked so good in the team’s first meet. Saunders anchored the Crimson Tide in that race with a 50.14.

Florida State got off to a great start in the 200 medley relay; Pavel Sankovich, who joined the team in January for what is expected just a three-semester tour, lef them off in 22.38, and though Alabama clawed back on every leg, the Seminoles had just enough to win in 1:29.72. Paul Murray from FSU (19.82) and BJ Hornikel from Alabama (19.85) both had very strong anchor legs.

The next race wasn’t as close, as Alabama sophomore Brian Westlake won by 11 seconds with a 15:45.61.

Things see-sawed back to Florida State in the next race, the 200 free, when Kevin Rogers bested BJ Hornikel 1:38.44-1:39.68. Hornikel started his Alabama career as a very good 200 freestyler,  but his sprinting made a big leap during his junior season, and perhaps a continuation of that shift to shorter events was evidenced in this meet. After taking just 2nd in that 200, he won the 100 later in the meet in 44.76 – a tenth ahead of Florida State’s Paul Murray.

Sankovich was largely uncontested in two of his individual events: the 100 backstroke, where he won in 48.75, and the 200 IM, where he won in 1:50.28, but in the 200 back, he was tipped by Florida State junior Josh Friedel 1:48.67-1:48.71. That race see-sawed back and forth as both swimmers fought for any sort of an edge, but a great third 50 by Friedel gave him enough of a lead to hold off a strong Sankovich finish for the win.

Alabama gets pumped up before their home opener against Florida State (Courtesy: Alabama Athletics)

The big star for the Alabama men was 19-year old freshman Anton McKee. In fact, despite his placement so late in this recap, his swims garnered the biggest buzz of this entire meet. The Icelandic Olympian first won the 100 rbeast in 54.67 ahead of FSU frosh Jason Coombs (55.97); and then he put up a 1:57.98 in the 200 breaststroke.

As of posting, those were the two fastest times in the country, and the 200 held that honor by two seconds. He’s now already moved into 4th place on Alabama’s all-time list in that 200 breaststroke.

All-in-all, this will come out as a positive meet for both teams. Both swam very well, and there were very few stumbles, though both showed that they have definite holes in their lineups as they try and build that elite depth under new (or almost new) coaching staffs.