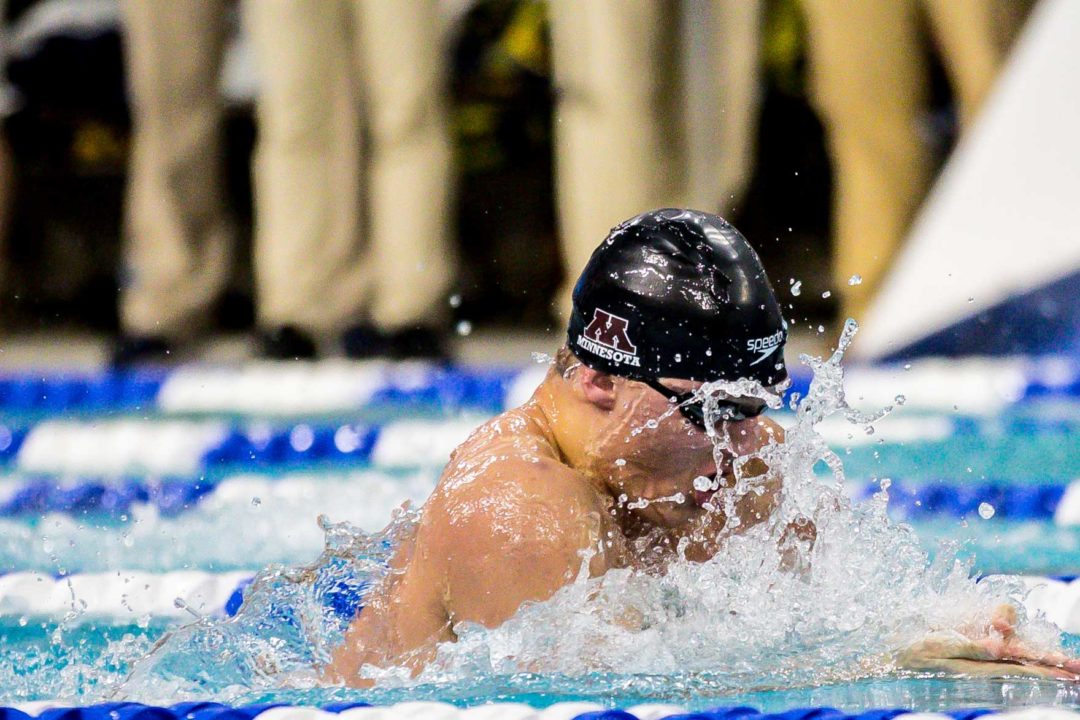 Max McHugh of Minnesota stole the show with the nation's #1 time in the 100 breast and the T-3rd-fastest 50 breast split in history on the 200 medley relay. Current photo via Jack Spitser/Spitser Photography

Wisconsin hosted its first-ever meet in the brand new Soderholm Family Aquatic Center, as match-ups were competitive pretty much across the board in this Big Ten tri. Overall an impressive meet from all three programs, Max McHugh of Minnesota stole the show with the nation’s #1 time in the 100 breast and the T-3rd-fastest 50 breast split in history on the 200 medley relay.

Wisconsin freshman star Phoebe Bacon led the charge for the Badgers, securing their first home win in the new natatorium.

Minnesota sophomore Emma Lezer was another standout performer for the Gophers. First, she split 27.55 breast on Minnesota’s 200 medley relay, lifting them to the relay win (1:39.36). She would go on to sweep the breaststroke events, going 1:00.63 in the 100 and 2:13.85 in the 200 and coming within tenths of lifetime bests in both.

Minnesota junior Max McHugh was an absolute force yesterday, his meet highlighted by the nation’s #1 time in the 100 breast (50.63) and a monstrous 22.69 breast split on Minnesota’s 200 medley relay.

His time in the 100 breast brings him just .33 off of his lifetime best from 2019 NCAAs, while his 22.69 split ties him with former Tennessee star Peter John Stevens for the #3 performer slot in history. On a legal medley relay, only Carsten Vissering (22.58) and Chuck Katis (22.64) have ever been faster.

The medley relay had more fireworks, too: Purdue’s Nikola Acin dropped the hammer on their A relay anchor leg, churning out an 18.71. He flew by Minnesota and Wisconsin, helping Purdue to the win at 1:26.00 ahead of the Badgers (1:26.33) and Gophers (1:26.88). Pellini was also 23.42 on Purdue’s breast leg in that relay, while Wisconsin had the best back leg in Wes Jekel (21.96) and the best fly leg in Erik Gessner (20.77). Acin would’ve been the third-best 200 medley relay anchor at the 2020 Big Ten Championships with his split yesterday, and Purdue’s 1:26.00 is the best time in the Big Ten this season and their third-best showing in program history.

Huge relay swims aside, Wisconsin picked up wins over both Purdue and Minnesota, powered by a slew of glowing performances from their freshman class.

Andrew Benson was another freshman with lights-out swims for Wisconsin. He was touched out in his first race, the 50 free, by Acin; Acin touched in 19.53 (#14 nationally) to Benson’s 19.85, but it was still Benson’s first time under 20 seconds ever. In the 100 free, Benson muscled out the win with a time of 43.43 over Acin’s 43.56, taking over a half-second off of his old best there.

It’s exciting to see some life in the Gophers’ sprint group after they finished last in the 400 free relay and second-to-last in the 200 free relay at the 2020 Big Ten Championships, and they only had one man under 20 seconds in the 50 and one under 45 in the 100 last season. Like their women, they look a lot stronger this year in the sprint free.

That’s Sherman’s first time under 1:40, a massive swim for him; he’s predominantly a breaststroker/IMer. Purdue won that final relay in 2:55.32, getting a 43.25 lead-off from Acin.

How about them Packers though?

Y’all needa learn how to act. Behave like you’ve won something before.

No franchise has squandered 30 years of HOF quarterbacking any better than the Pack. #GoPackGo

If Eli Fouts was in the meet the badgers would have dominated the meet and the other teams would have relished in the glory of his immense swims. I think cancel culture needs to come back to cancel those who didn’t let THE ELI FOUTS swim. #ad

That dude Benson is gonna be a problem. It is remarkable that he was a fast-rising top 50 recruit while going to the most academically demanding private school in the country. Not being in that pressure-cooker of an environment is going to do wonders for his time drops.

Jacob Carlson, man, what a guy. I wish I was him sometimes. If only…

Let it be known that I called Carlson, Delaney and Gessner on the A 400 free relay almost 6 months ago and people looked at me like I was insane…