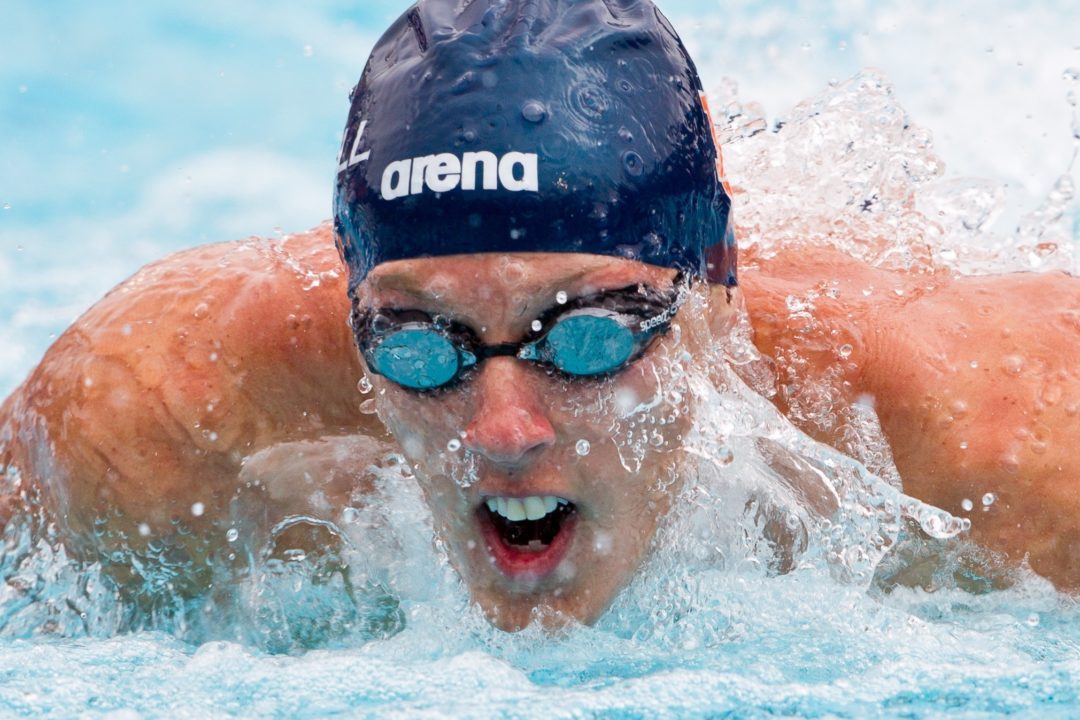 While competing at the 54th Geneva International Challenge, Swiss swimmer Roman Mityukov fired off a new national record in the men’s 200m backstroke.

Explanation of French Olympic Qualifying: Swimmers must ultimately pass under the FINA A-time in finals to earn an individual swim for the 2012 Olympics, but in many events there are certain standards that need to be met in each of the earlier rounds as well, so no loafing through prelims is allowed. Swimmers, even if they don’t hit those intermediary times, can still earn relay swims by winning in finals, where applicable. The French Federation does have the ability to make exceptions, but is generally very strict.

The second-to-last day of the 2012 French Olympic Swimming Trials saw bittersweet moments for the Auburn family back home in the states. While Tyler McGill (an American) was very good in the 100 fly, his training partner Fred Bousquet may have seen his career just about end in Dunkerque.

Laure Manaudou nailed down a second National Title at these French trials, as well as a second individual Olympic qualification, by winning this 200 back in 2:08.06. That stands as the 4th-best time in the world this year (a spot ahead of Missy Franklin) and one of the better 200 back times in her career. She’s always swum extremely well in this Dunkerque pool, and though there were some complaints from many of the swimmers, I think that for a Manaudou comeback meet, it was an excellent decision.

Not far behind her was her younger teammate Alexianne Castel, who took 2nd in 2:08.57. That’s about the time she went last year at the World Championships in Shanghai.

Another 21-year old, Cloe Credeville, was the fastest she’s been in textile with a 2:09.79. That also cleared the Olympic qualifying time, but as the third finisher will leave her home. Hopefully she keeps training through to Rio de Janiero, as she could be very good once Manaudou (presumably) retires again after London.

This 100 fly final was won by a blazing 51.95 from American Tyler McGill. That’s a surprisingly-good time for him, given that the group from Auburn competing at this meet (aside from the French Nationals) haven’t looked like they were any sort of rested for the event. That’s still the 2nd-best time in the world this year in this race, and re-establishes the fact that he’s a medal candidate in London.

The top American finisher was Clement Lefert in 52.48. That misses a spot in London by just a tenth. Still, he was the highest-finishing French swimmer, and that’s the key for him. He might have scratched the individual either way, but this puts him on a medley relay that is looking to have a big bounceback season. With Lacourt on the backstroke, Agnel on the freestyle, and an improving Giacamo Perez likely taking over the breaststroke leg, with a solid fly the French could return to medal position after failing to final at Worlds. That’s the race that Lefert will want to be a part of. Florent Manaudou didn’t even try this event after swimming this relay leg at last year’s Worlds – he had to focus on the 50 free, where he was the top seed coming into finals.

And even more shocking turnover in the impressive French sprint group came in this 50 free. Amaury Leveaux earned a 3rd individual Olympic swim (along with what is sure to be a lot of relays) by winning this 100 free in 21.93. He was followed closely by the younger Florent Manaudou, whose decision to not swim the 100 fly paid off big time with a 21.95 in the final (he was faster in the semis).

This means that Fred Bousquet, one of the legendary speed-men in the sport, has missed the 2012 French Olympic squad, and as he’s 31-years old, has likely ended his competitive swimming career (at least at the major level). His time wasn’t bad (hewas 4th in 22.05), but the younger part of this field just got too fast.

Fabien Gilot was 3rd in 21.96, meaning that his only races in London will be the 100 free and the 400 free relay (with maybe a medley prelims swim). Alain Bernard, another French legend, was 5th in 22.15, which means he will be relegated to relay-only duty (and an alternate position, at that).

Coralie Balmy had by far her best swim of this meet to earn an Olympic qualifying spot in this 800 free with an 8:29.96. That’s the fastest time she’s been in textile, and four seconds improved over her best swim from 2011. Hopefully that builds some momentum for her headed towards London, as outside of Muffat this French middle-distance group has been challenged. She will be the only French swimmer to swim this race at the Olympics, though Romania’s Camelia Potec had the best swim we’ve seen from her in years to take 2nd in 8:31.06.

Sad, he was one of my favorites for a medal.
He was always a great racer.