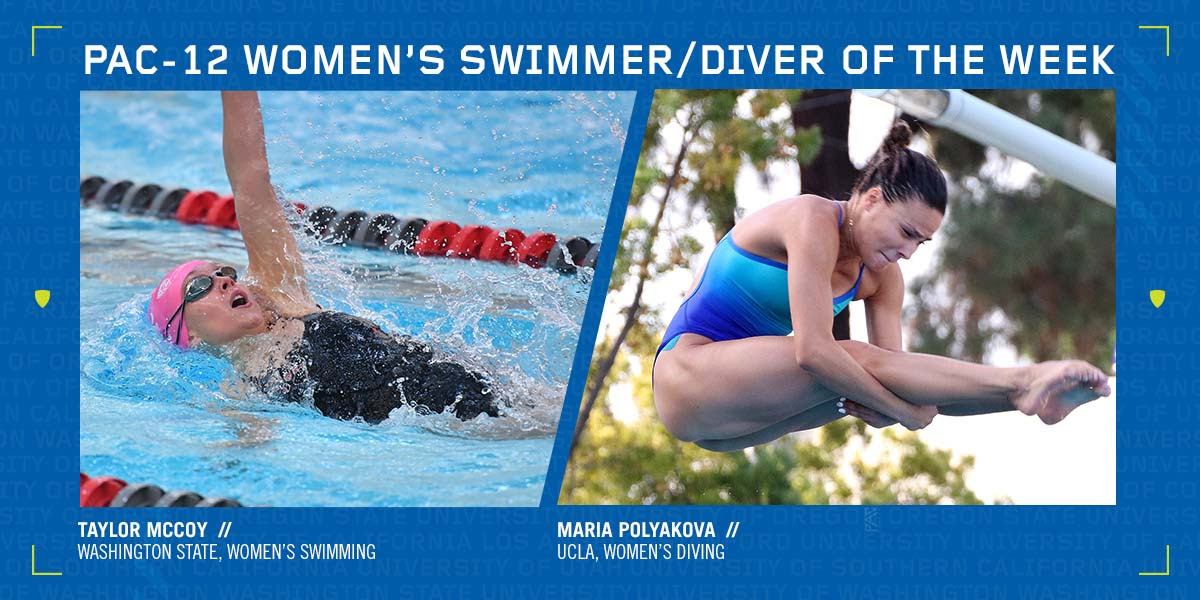 McCoy won all three of her individual events to earn 27 points and competed in a relay victory in Washington State’s 150-107 loss at No. 14 Arizona. The sophomore won both the 100 and 200 backstroke at times of 57.26 and 2:02.99, respectively, and touched the wall at 4:25.58 to take home first in the 400 individual medley. She swam the opening leg of the 400 medley relay alongside teammates Mackenzie Duarte, Emily Barrier, and Keiana Fountaine, that clocked in at 3:45.64 to secure first place. McCoy recorded three fourth-place finishes as the Cougars fell to No. 25 Arizona State, 174-85, in Tempe. McCoy leads the team with 12 individual wins this season and is now a member of two relay wins. In only her second season, she has etched her name in three WSU all-time events, recording top-10 times in the 100 and 200 backstroke and the 400 individual medley.

Polyakova won all three events in which she competed in January with all three scores reaching NCAA Zone qualifier status. On Jan. 7, she swept the 1-meter and 3-meter to help UCLA record wins over San Diego (215-77) and Harvard (184-110). Polyakova had a standout performance in the 1-meter championship, taking first with a final tally of 317.75 for her second-best of the year, trailing only her school-record 355.50 mark set earlier this season. At the Bruin Diving Invitational at Spieker Aquatics Center, Polyakova finished first in the 3-meter championship among a 60-diver field. Her podium dive set a Dirks Pool-record with a score of 375.75 in the 3-meter finals for a combined score of 697.90 on day one of the invitational to help earn back-to-back Pac-12 honors.