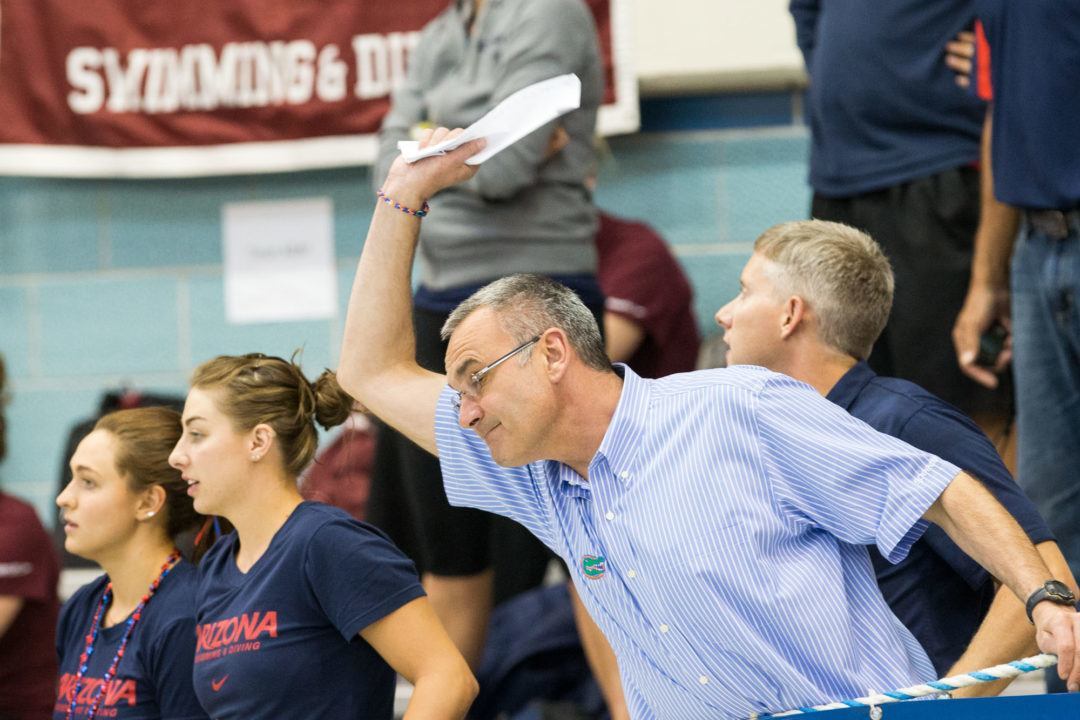 After more than a quarter-of-a-century coaching with Gregg Troy, Martyn Wilby is stepping away from college coaching. Archive photo via Tim Binning/TheSwimPictures.com

University of Florida associate head coach Martyn Wilby has announced his resignation from the program after 19 seasons in Gainesville. Wilby does not plan to pursue other opportunities to coach in the NCAA, a spokesperson for Florida confirmed.

“Martyn has been a remarkable asset to our coaching staff over the past 19 years and we are extremely grateful for everything he has brought to the table,” Florida head coach Gregg Troy said. “While we are disappointed that he will not be with us next season, we understand his desire to move on from collegiate coaching and we wish him nothing but the best moving forward.”

“The impact he’s left on the men’s and women’s swim teams will not be forgotten,” Troy added. “We’re extremely fortunate to have had his dedication, passion, and professionalism each and every day for 19 seasons. He’s extremely knowledgeable in every aspect of the sport and I can’t thank him enough for everything he’s done for us. Florida swimming certainly would not be where it is today without his help over the years.”

Wilby arrived at the program in 1998, and during his tenure the team has won 330 dual meets, 6 SEC Championships, 34 individual national titles, and over 900 All-American honors.

He’s a native of Darlington, England, where he was a four-year letter winner at the University of Kentucky from 1982-1986 and also a member of the British National Team. He and Troy first coached together for 7 years at the Bolles School in Jacksonville, Florida, including being named the 1994 Florida Age Group Coach of the Year.

“I’m eternally grateful for the experience I’ve had over the years and to work alongside so many extraordinary coaches and student-athletes,” said Wilby. “My time as a Gator has truly provided me with a rare opportunity that I would not have found anywhere else.

“When Coach Troy originally asked me to join the staff, my plan was to stick around for three to five years and help him get the program back on track. Little did I realize what was in store for me. Now, almost20 years later, my entire family and I have fallen in love with this university, this program, and the tremendous support system that surrounds it.”

“I’d like to thank Jeremy Foley for taking a chance on a couple of coaches from the Bolles Sharks Swim Club when he did. None of this would have been possible had we not been given the opportunity to join Gator Nation.

“I’d also like to thank coach Troy. I’ve been fortunate to work alongside him for 26 years now and I can’t thank him enough for bringing me along on this incredible journey. The relationship we’ve built goes far beyond two coaches and a shared office space. I truly value the connection that has formed between the Wilby family and the Troy family, and I look forward to continuing that relationship in the coming years.”

“As I leave Florida, I’d also like to extend one last thank you to our support staff, and everyone who has contributed to this team’s success over the years. There is no other university out there that could have made my time in the Orange and Blue so enjoyable and I’m forever grateful for the opportunity to be a Gator.”

Titles at UF are just that, titles. There is no division of duties based on gender. Coach Wilby is a class act as a coach and as a person as is his family. He will be sorely missed. Best of luck Coach!

Anyone else forsee Sergio jumping at Auburn before he even starts at running to Caeleb?

I don’t think Sergio was ever his main coach at Bolles. I believe that was Jason Calanog. I do however, think that the UF position is better thanow the one he took at Auburn so…

Yes, NDB is correct. Sergio was not Caeleb’s coach…. Jason was so Sergio really didn’t partake in Caeleb’s success in club swimming.

Best of luck Martyn! You will be missed!