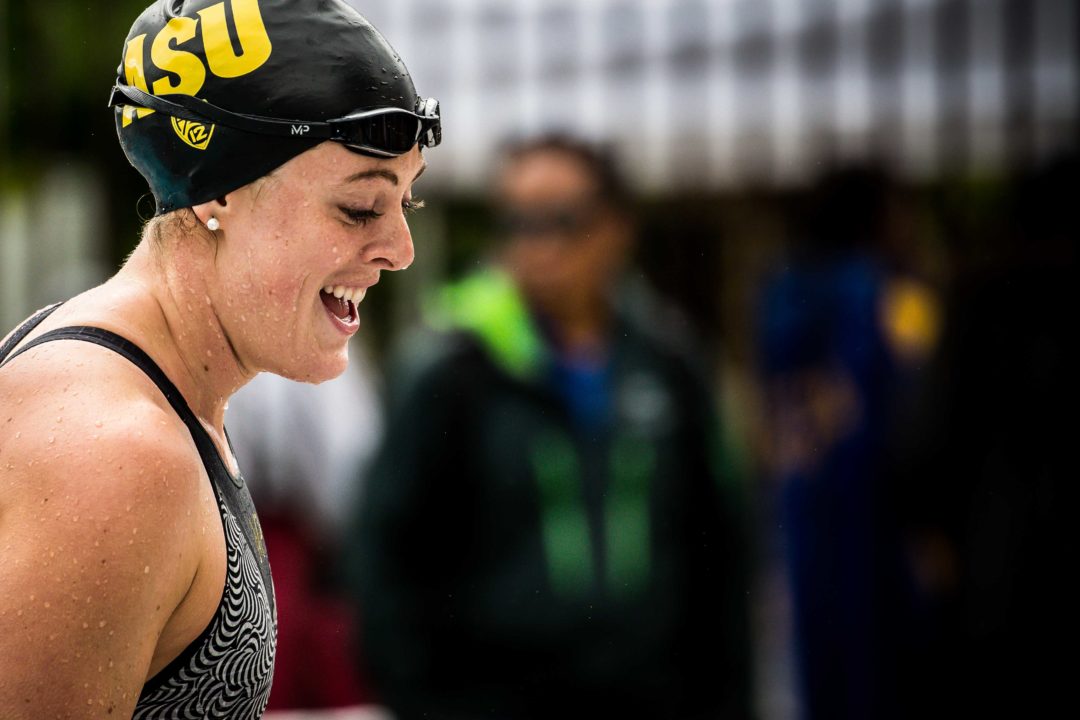 Four-time Olympic gold medalist Allison Schmitt has signed up to make her ISL debut in 2020, swimming for the Cali Condors. Archive photo via Jack Spitser/Spitser Photography

The Cali Condors have made another late change to their 2020 ISL roster, and have made the biggest pickup since team rosters were first formally announced 2 weeks ago.

Schmitt, who trains under Bob Bowman and who has spent much of her career as a training partner to Michael Phelps, did not participate in season 1 of the ISL. But the 30-year old has had an apparent change of heart late in the process and agreed to join the 5-week camp, and probable championship camp, this season.

Schmitt is the owner of 4 Olympic gold medals, including an individual 200 free at the 2012 Summer Olympics, as part of 8 total Olympic medals.

In long course, that 2012 Olympic gold medal in the 200 free is the 2nd-fastest swim in the history of the event, behind only Federica Pellegrini of Aqua Centurions.

She is also a former World Champion in the 200 free in short course meters – which is the course used by the ISL.

After a mid-career lull in performance, Schmitt has re-emerged as a part of the U.S. elite over the last 2 years. That includes a spot on both American silver medal winning free relays at the 2019 World Championships.

Schmitt overall has similar event skills to Comerford, who she is replacing. At this point in their careers, the 23-year old Comerford has surpassed Schmitt on the international register, especially in long course. Last season, though, Comerford didn’t really race up to her full potential.

Individually, she finished mostly in the bottom-half of her events, though in the Las Vegas finale she did come closer to her best times.

The Condors are stacked in the sprint freestyle events, with names like Kelsi Dahlia, Natalie Hinds, Olivia Smoliga, Veronica Burchill, Erika Brown, another late addition Lia Neal, and maybe even Beata Nelson to use there. With Haley Anderson joining the team late, that puts them in good shape in the 400 free too. The addition of Schmitt gives the Condors some serious A-B free relay firepower, gives them more flexibility in resting their ‘skins’ swimmers in the mixed 400 free relay late in the meet, and gives the Condors coaching staff another option to choose the ‘hot hand.’

She also brings some more starpower to a Condors roster that already has a lot of it. In a bit of a strange ISL season, driven by complications from the coronavirus pandemic, that starpower might be as valuable to the long-term health of the club, and the league, as any specific times are.

Can you explain how it’s a sham? I’m curious?

I wouldn’t say its a sham because it is doing what its original purpose was to do which was to make swimming more popular. The recent CBS TV deal is a signal of them moving in the right direction. A smaller goal which was to help swimming become more popular was to make it easier for non-superstar swimmers to make a living off of the sport which wasn’t possible before. It really doesn’t seem like ISL has made this priority due to so many participants receiving literally $0 for racing in some of the meets while some of the top tier names make ten’s of thousands at the same meet. Additionally, with the added pay bonus of being an ambassador,… Read more »

Your comment about some swimmers receiving $0 is incorrect for this upcoming season. Everyone gets at least $15,000. https://swimswam.com/isl-salaries-hit-15k-per-swimmer-for-2020-season/

It’s a pretty sweet deal to be able to train and compete in an environment with other world-class swimmers for 2 1/2 months, get paid no less than 15k, and have all your expenses paid.

Didn’t want to post on Jeff Julian’s article, where the assistant coaches were mentioned. How is Sean Schimmel an assistant coach for Cali Condors??? Bad choice, he ran Arkansas girls team into the ground and the comments he was rumored to have said, “why don’t you lose 5lbs”.

I don’t think these ladies will be taking that crap from some unknown guy. .