Maddy Banic Pops 22.7 50 Yard Fly in Practice Just Before Start of US Trials 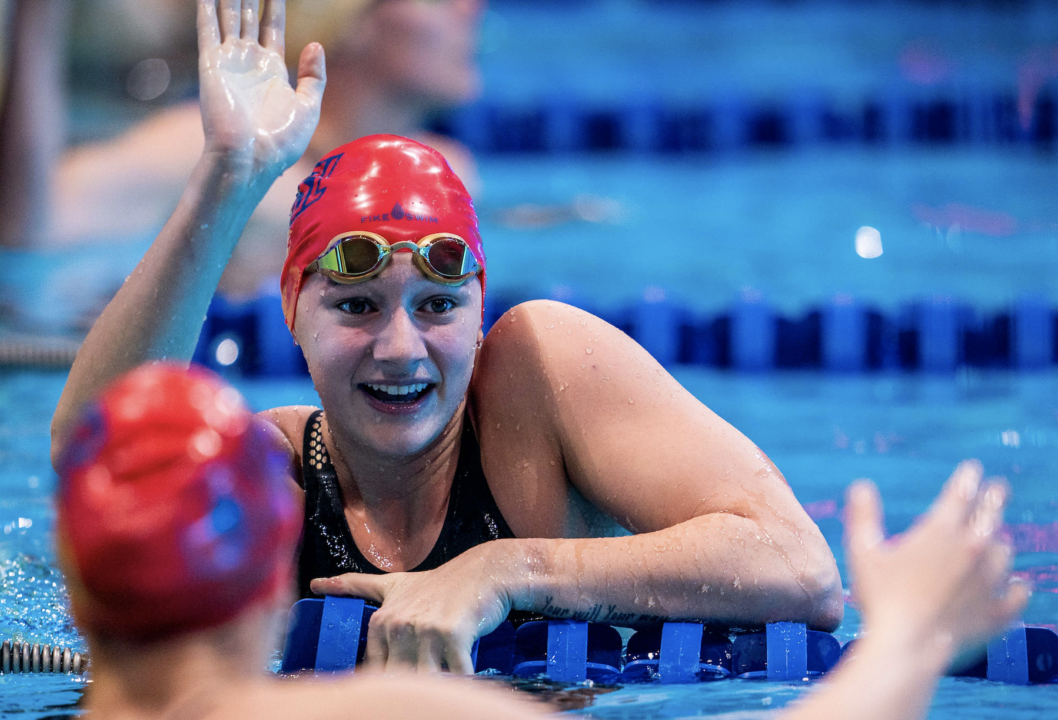 Maddy Banic has put up a warning shot in a practice swim ahead of next week's U.S. Olympic Trials - something we've seen from her before. Archive photo via Mine Kasapoglu

We’ve seen this story before.

Former Tennessee Volunteer, and current Tennessee post-grad, Maddy Banic busts out a fast practice swim, and then follows it with a breakthrough at a meet that counts.

There, she split 22.58 with a .10 reaction time. Relay starts are usually worth at least half-a-second, which would put her 22.7 flat start at least around a 22.2 on a rolling-start equivalent. That’s three-tenths faster than she’s ever been on a rolling start.

What does this all mean for Banic? We won’t know for sure until next week. The swim was done in a 25 yard pool, as compared to the 50 meter pool that she’ll have to swim in next week as she attempts to qualify for the U.S. Olympic Team. It was also only a 50, which is not an Olympic event, versus the 100 that she’ll swim next week.

But Banic has some credibility of turning breakout practice swims into breakout competition swims. Last September, she swam a 50.6 in the 100 yard fly in practice, which was a best time for her. That led Energy Standard to sign her at the last minute for the International Swimming League season, which led to her being one of the true breakout performers of the ISL that saw her finish the regular season ranked 80th in the league in MVP scoring – and even that was mostly for wont of opportunities because of being part of the deepest butterfly group in the league.

It still will be a tall order for her to make the Olympic team in the 100 fly, with rising young swimmers like Claire Curzan and Torri Huske along with Olympic gold medalist Kelsi Dahlia to contend with.

We haven’t yet seen if Banic can truly turn her short course success into long course yet. She did go a lifetime best at a Pro Swim Series meet earlier this year of 59.26, which is encouraging. She’s only the 36th best American in the Olympic Trials qualifying period and just the 29th seed pre-scratch for Omaha, but she’s one more breakout away from a semi-final or even possibly a surprise final this week.

She’s done it before, so no reason to doubt her now.

Want to see a 22.7 50 Fly from a FLAT START? Don’t blink or you’ll miss American Record holder @madeline_banic in her lead up to Olympic Trials 💯🍊@swimswamnews @SwimmingWorld pic.twitter.com/xfov5MRlVr

Yeah Maddy!! Will root for her as long as she’s swimmin!

It must be a slow day at the office

One less stroke the 2nd 25 (5/4). Don’t see that very often. Definitely questionable on the 15m off the wall. Incredible underwater speed though.

Yep, it was kind of hard to tell if she was within 15m on that second 50. Nonetheless, it was an absolutely fantastic swim.

What is the fastest 50 fly from a regular start ever for a female?

Training short course 2 days before trials, is that a thing..?

To clarify as well, I know not everyone has access to a long course pool all the time..but I’m assuming trials qualifiers most likely do. Either way, impressive split.

Easy to get some turn and skill work in, one one short course workout wont ruin the meet haha.

True that. Good luck to her and everyone, I can’t wait to watch

She sure does like to ride the line with the 15m marker. Blew past it in a prelims race in Mission Viejo