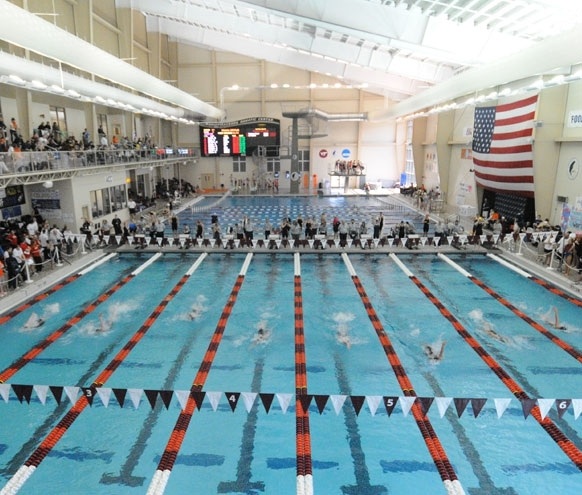 Opening night two of competition was the women’s 200 yard freestyle, where Heather Maccausland took home the gold as the only swimmer to break 1:50. The 15 year old Maccausland clocked a 1:49.49 finishing nearly a second ahead of 1650 bronze medalist and Tennessee commit, Amanda Nunan. Future cadet at the Naval Academy Alexa Kozlina rounded out the top three in a time of 1:50.59.

The first event of the night for the men featured three swimmers who all broke the 1:40 mark in the 200 freestyle. Colin Murphy won the invent by over a second in 1:38.50. Murphy originally hails from The Woodlands Swim Team in Texas but is currently a Hokie at Virginia Tech. The race for second was highly competitive but it was Matthew Magness, the top seed entering finals, who touched  out Pete Makin, finishing in times of 1:39.67 and 1:39.83 respectively.

Women’s 200 freestyle champion, Heather Maccausland, completed a tough double by winning the 100 yard breaststroke, out touching Delaware Swim Team’s Olivia Paoletti by .09. Maccausland dropped over a second from her seed time entering the meet to finish in a time of 1:01.86. University of Kentucky commit Bailey Bonnet was not far behind finishing in third at 1:02.12. Notably, both 15 year old Maccausland and 17 year old Paoletti will return next year.

Virginia Tech Hokie Lasse Pittioni led the charge for the men in the 100 breaststroke going just under the 55 second mark at 54.99. Matthew Otto of Delaware Swim Team finished in second at 55.16 and in third was Antonio Octaviano at 56.19. Octaviano recently became the fourth fastest 13-14 year old 100 breaststroke when he went 56.33 at the 2017 Easterns Interscholastic Swimming Championships in February.

Joining teammates Pittioni and Murphy was Maggie Gruber who won the 100 butterfly in a time of 53.42. In similar fashion to the women’s 100 breaststroke, the race in the 100 yard butterfly was for the silver medal. Morgan Liberto touched out Joelle Vereb for the silver by .09 clocking a 54.56. Vereb is set to attend Virginia Tech in the fall.

Alexa Kozlina, who finished third in the 200 freestyle, finished seventh in the 100 butterfly at 56.45.

The contingent from Delaware Swim Team took control of the men’s 100 yard butterfly where teammates Jacob Johnson and Matthew Otto took gold and silver. Johnson won the event handedly by going a very speedy 47.77 and Otto finished in a time of 50.67. While Johnson is just a junior, the Cavaliers at the University of Virginia will gain a strong butterflier in Matthew Otto next fall.

Olivia Paoletti, who was narrowly beaten in the 100 breaststroke earlier in the session, was able to claim the crown in the women’s 400 yard individual medley. Paoletti won the event by nearly four seconds over second place finisher Madeline Heilbrun. Paoletti’s time was just off the 2017 US Open qualifying time standard of 4:15.49. Heilbrun finished in a time of 4:20.03 and not far behind was Colby Hurt at 4:20.75.

Finishing in 8th place was Anna Kalandadze, who took home silver last night in the women’s 1650.

In the final individual event of the night, three swimmers who all completed grueling doubles were able to be under the 4:00 barrier. Jacob Johnson and Matthew Otto were able to 1-2 yet another event clocking 3:51.84 and 3:54.33 respectively. Matthew Magness took home third, knocking over four seconds off of his seed time to break the 4:00 barrier in a time of 3:59.83. Magness finished second in the 200 freestyle earlier in the session.

In the final women’s event of day two, The Egg Harbor Township Seahawks, won the 800 freestyle relay. The team of Katie McClintock, Lauren Kelly, Maggie Wallace, and Amanda Nunan beat the field by over three seconds in a time of 7:27.07. Lauren Kelly had the fastest split on the championship relay of 1:50.47. Finishing second was the team from 757 Swim in a time of 7:30.70. Finishing third was the team from Pittsburgh Elite Aquatics. Karen Siddoway led off their relay in a 1:51.38 which would have placed her 7th in the 200 freestyle individual event.

Delaware Swim Team ran away with the 800 freestyle relay, winning the event by nearly six seconds. The team of Jeb Darhower, Bryce Ciecko, Emils Gustav Jurcik and Alec Menzer won the event in a time of 6:46.71. Finishing second was Egg Harbor Township at 6:52.14 and in third Lancaster Aquatic Club at 6:54.95. 1000 champion from last night anchored the Lancaster Aquatic Club relay in a time of 1:41.31, just off his time of 1:41.11 from the individual event earlier this evening.

Following the events of day two the team scores are:

Day three prelims will begin at 9:00 am tomorrow morning and will feature: