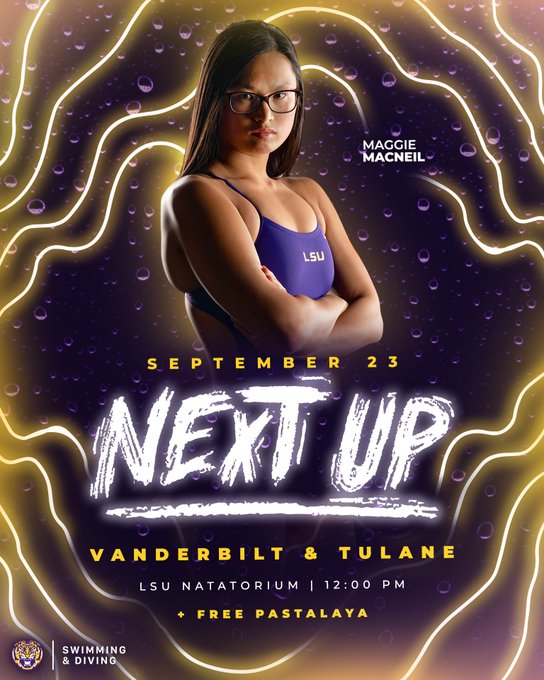 LSU opens the highly-anticipated season against the Vanderbilt Commodores and Tulane Green Wave inside the LSU Natatorium on Friday. Current photo via @LSUSwimDive / Twitter

“We are very excited to have Vanderbilt and Tulane coming in to compete at the LSU Natatorium,” Bishop said. “It’s going to be an awesome opportunity for our women to get up and race against some great competition very early in the season. In addition, the opportunity to recognize 50 years of women in athletics is not only a monumental celebration for our women and our sport but an incredible salute to every woman across the landscape of athletics.”

LSU takes on the Commodores and Green Wave in the regular-season premiere after competing in an intrasquad Saturday, Sept. 17. The annual Purple and Gold intrasquad contained incredible competition with Gold closing out the victory against Purple in a close 261-260 score.

This year’s women’s squad adds some impressive swimmers including Olympic gold medalist Maggie MacNeil. MacNeil, who has dominated the swimming scene since her time at the University of Michigan under Bishop. While at the 2020 Tokyo Olympics, she won gold in the 100 fly with a time of 55.59.

Most recently, MacNeil competed at the 2022 Commonwealth Games where she broke the meet record in the 100 fly with a time of 56.36. With international records to her name, she is looking to etch her name in the LSU record books when Friday’s meet rolls around.

In addition to MacNeil, LSU added Jade Hannah, a highly touted transfer from the University of Southern California. Before arriving at her previous school, Hannah claimed the FINA World Championship in the 100 back and 200 back and is poised to give LSU incredible depth in the backstroke events.

A few new LSU record holders and SEC scorers are returning to the pool for the purple and gold, too. Jenna Bridges, who had an impressive freshman season looks to build on her success. During the 2021 season, Bridges collected a school record in the 500 free, which sits at 4:43.87.

Katarina Milutinovich, a veteran of the women’s swimming team and coming off a trip to the NCAA Championships, has higher aspirations this season. Before competing in the freestyle events inside the McAuley Aquatic Center, she faced off against her conference foes and scored in the top-12 of each event she appeared in at the SEC Championships.

The meet Friday afternoon won’t feature a diving portion. Live stats for the swimming events can be found on MeetMobile.

The men’s team and the divers are set to join the women’s swimming team at the Tigers’ first dual meet against South Carolina on Oct. 8 at 9 a.m. CT.

Follow LSU Swimming and Diving on all social media platforms @LSUSwimDive and stay up-to-date on anything having to do with the team.