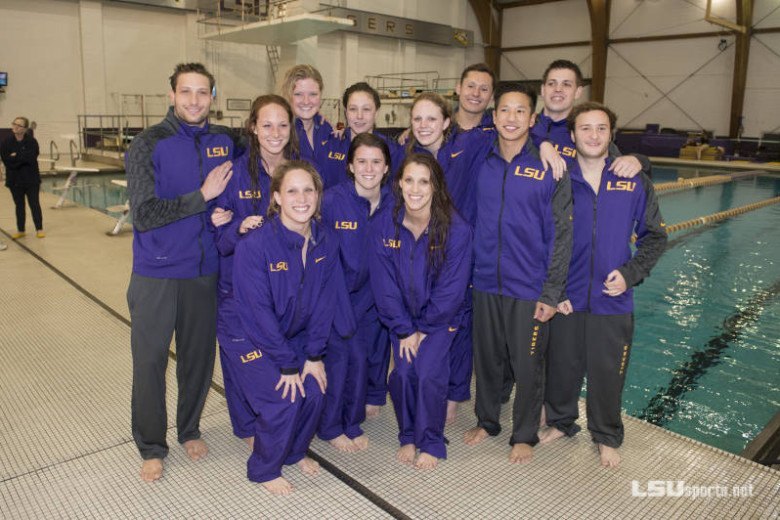 The LSU senior class split in their final home dual meet, with the men topping and the women falling to SEC rivals Texas A&M. Current photo via LSUSports.net

Saturday saw the last home meet of the 2013-2014 season for the LSU Tigers, which meant that it was senior day, and the outgoing swimmers were honored in a ceremony before the meet.

“On the men’s side, they just wanted it so much,” LSU swimming coach Dave Geyer said. “The seniors have been burned by A&M the last three years so it was great to go out on top. They knew they wanted to come in and get this win. Frank (Greeff) gave us a spark, but it was a total team effort from the boards to in the water.”

Geyer is referring to the fact that in the three previous match-ups between the two men’s squads, e.g. the three prior meetings for the two senior classes, A&M has won by an average margin of just over 28 points.

“It was a great meet for swimming fans,” said Texas A&M head coach Jay Holmes after the tight competition. “There was a lot of back and forth and some great racing, especially with the history between the two teams.”

The emotion ran high for the LSU men; they started the meet with an incredibly-tight 3:18.05-3:18.30 win in the 400 medley relay over the Aggie men, thanks in large part to a 54.92 breaststroke leg by Gabriel Rooker, whereas the Aggies are still struggling, though improving, in the breaststrokes (they got a 56.14 from Jack Burley on their second leg).

After that race, LSU senior and captain Frank Greeff got his team fired up, and continued on to lead them to victory with two individual wins. The first came in the 200 fly where he rocketed-out on a 50.86 front-half to win in 1:47.48 over A&M’s Omar Enriquez (1:48.84). He followed that with a 48.44 over Aggie Henrik Lindau (48.77): a pair of swimmers who are likely to be SEC finalists in this race in about a month.

What the Aggies gave up in the stroke events, of which they won only a single race, they made up for in a big way in the freestyle events. This team is a bit reminiscent of the Aggie men c. 2008/2009, when their sprint freestylers carried a big load for the team.

In the 200 free relay, Lindau and Troskot combined with surprise freshman Cory Bolleter and Paul-Marc Schweitzer to win in 1:20.45 ahead of LSU’s 1:21.06. Bolleter split a 19.70 on A&M’s 3rd leg to create just enough separation.

Schweitzer earlier won the men’s 200 free in a great come-from-behind win over LSU’s Alex Linge 1:39.80-1:39.83. Linge had about an eight-tenths of a second lead heading into the final 50 yards.

Enriquez finished off the freestyle sweep with a 4:29.96 in the 500 and a 9:15.92, both of which were relatively easy finishes over LSU’s Elliott Dewelen. Enriquez’s swim in the 1000 free was his best of the season by 9 seconds, and his 500 was the best aside from the Aggies’ mid-year invite.

But again, LSU’s stroke swimmers showed off their depth in this meet against A&M’s lack-there-of. Freshman Silas Dejean took the win in the 100 breaststroke in 55.65, with his teammate Ricardo Alvarado-Jimenez touching 2nd in 56.25 and A&M’s Burley 3rd in 56.65. LSU had 7 swimmers finish this race before A&M’s second did. Note that LSU’s best sprint breaststroker, Rooker, didn’t swim that race.

Alvarado-Jimenez won the 200 in 2:00.59, followed by Rooker in 2:01.28 and the race again was LSU dominated: they took the top four finishing spots, even though only three were allowed to score.

At last year’s SEC Championship meet, LSU finished one spot, and 44 points, ahead of A&M for 6th-place. The result of this meet indicates that the Tigers are apt to do so again in 2014.

The A&M women, meanwhile, took their third-straight January blowout since tying Georgia just over a week ago, in routing the LSU women. Some of the lesser-known Aggie women swam very well in this meet, but A&M’s stars weren’t as good as we’ve seen them in the last few: though an intense week of competition perhaps is leading to some race-fatigue.

The most notable absence for the Aggies was breaststroker Breeja Larson, who didn’t compete in Baton Rouge.

Larson was in a bit of a fender-bender a week ago where she was rear-ended by a truck. She’s raced multiple times since then, and is not expected to have any long-term issues, but with a bit of a sore back, A&M head coach Steve Bultman decided not to put her on a bus for the 5.5 hour road-trip each way to Baton Rouge.

A&M’s breaststroke depth made that merely a hiccup, however, as Ashley McGregor slid in with a 1:02.71 on the 400 medley relay, where she combined with Paige Miller, Cammile Adams, and Sammie Bosma in 3:53.20 for the win over LSU’s 3:45.33. The Aggie medleys still seem to be very much an open battle as to who will swim the relays at NCAA’s.

LSU, though in a lopsided event scoring-wise, did get some big confidence-boosting swims. None was bigger, though, than freshman Kara Kopcso, who swam a 1:56.12 to win the 200 fly over Texas A&M Olympian Cammile Adams in 1:57.36.

Kopcso learned upon waking up on Saturday that she would be suited-up for the meet, and not only did that give her a win and a lifetime best, it should be enough to secure a spot at the NCAA Championships based on historical invited times. That allows her to relax a little at the SEC Championships.

Aside from the surface-level significance of Kopcso’s swims, a deeper benefit for the Tigers is that Kopcso is a local swimmer from Mandeville, Louisiana. The state has not historically been a huge ground for talent, and the LSU women only have 5 in-state swimmers on their team. But taking a swimmer like Kopcso and developing her so well in just her freshman season will continue to grow their recruiting footprint and maybe even enhance the performances in the state at the junior level.