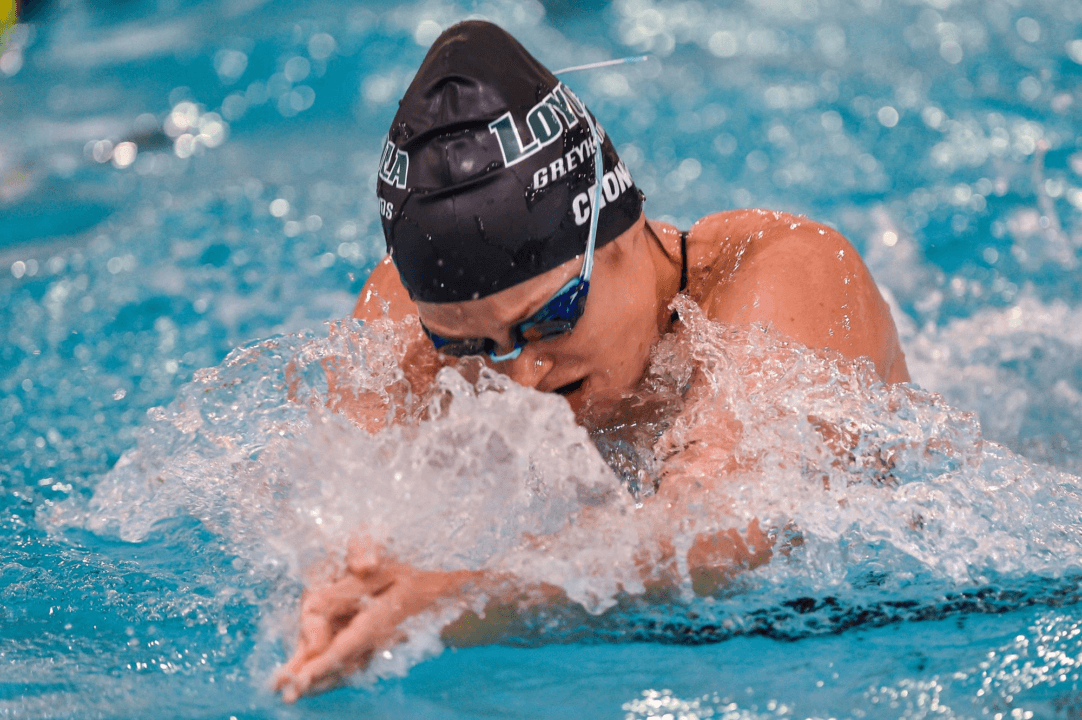 BALTIMORE – The Loyola University Maryland men’s and women’s swimming and diving teams combined to win all but one of the swimming events in two sessions on Saturday, breaking four school and two Mangione Pool records in the process.

Loyola’s women’ finished with 1,114.5 points, an even 200 in front of second-place Marist College. Iona College was third with 793, while Howard University (408) and Mount St. Mary’s University (293) followed in fourth and fifth.

Megan Dickey and Emma Schouten split Female Swimmer of the Meet honors, while Sung Lee earned the award on the men’s side.

Dickey set a school and pool record in the 100 freestyle, swimming 50.26. Her effort bettered Caitlin Cronin‘s school mark of 50.77, and it took down the pool record of 50.49 set in 2003 seven-time World Champion and three-time Olympic medalist Katie Hoff.

Devin Cronin also set a new school standard on Saturday, bettering her own mark in the 100 breaststroke with a winning swim of 1:02.69, shaving almost a half-second off her previous best of 1:03.16.

Cronin and Dickey were also in on a pool-record setting 200 medley relay. Taylor Ament led off, followed by Cronin, Emily Koegl and Dickey, who finished in 1:43.12 to beat the mark of 1:44.36 in 2016 by a Drexel University relay squad.

The women’s 200 freestyle relay of Elizabeth Walsh, Sophie Jahan, Cronin and Dickey opened Saturday’s action with a win in 1:35.95, and the men’s relay – Lee, Colin Anderson, Brendon Kolar and Jimmy Hayburn – duplicated the feat in 1:22.23.

Cronin was a winner and school-record setter in the 100 breaststroke, while Abby Andrews swam 1:08.00 to place fourth.

The men’s 200 medley relay of Brooks, Callaghan, Jimmy Hayburn and Anderson won in 1:30.50, while the women’s group of Ament, Cronin, Koegl and Dickey too first with their pool-record time.

Dickey won the women’s 100 freestyle in school- and pool-record time, followed in second and third by Brooke Sharkey (52.66) and Jahan (53.23), respectively.

Lee, Hussey, Anderson and Jimmy Hayburn closed the meet with a victory in the 400 freestyle relay, swimming 3:03.45. Walsh, Jahan, Sharkey and Dickey then won the women’s relay in 3:29.09.

BALTIMORE, Maryland – Men’s Swimming and Diving competed at the H2Hounds Invitational from November 30 to December 1. The men finished the competition with 807 points, beating out  Mount Saint Mary’s, Iona and Howard but fell to Loyola Maryland. The men now sit at 6-2 on the season. Raislan Aiken was named Diver of the Meet.

Marist women swimming and diving competed at the H2hounds Invitational from November 30 to December 1. The team scored 914.5 points for a second place finish, topping Mount Saint Mary’s, Iona and Howard but falling to Loyola Maryland. Grace Reeves was named Diver of the Meet. Marist now sits at 4-4 on the season.

With the results of the men’s and women’s meet from this weekend, Head Coach Larry VanWagner and Associate Coach Melanie Bolstad earned their 400th career duel meet victory.

SESSION ONE
The men started the day with a third place finish in the 400-yard Medley Relay from the A team of Miguel Madeira, Edward Oser, Pavel Makarchuk and Daniel Knoll with a time of 3:24.13.

The men concluded Friday finishing second in the 800-yard freestyle relay. The team of Knoll, O’Donovan, Murray Coueslant and Madeira finished with a time of 6:52.34.

Marist started the day with a third place finish in the 400 medley relay from their A team of Juliet Nowak, Georgeanne Zimmerman, Emma Butzler and Jessica Freud. The B team of Veronica Stureborg, Amanda Poor, Jessica Miller and Jordyn Deubel finished right behind them in fourth.

Heather Hartmann lead the distance swimmers with a second place finish in 500-yard freestyle with a time of 5:06.75. Sidney Judson was not too far behind, finishing in fourth.

The women ended the session with some momentum, winning the 800-yard freestyle. The team of Hartmann, Judson, Freud and Deubel edged Iona’s team by .04 seconds with a time of  7:42.90.

SESSION TWO
The men opened up the second session with a third place finish in the 200 freestyle relay. The all senior team of Knoll, Edward Oser, Mark Miller and Gregory Violette finished less than half a second behind second place with a time of 1:24.85.

Marist claimed two of the top three spots in the 400-yard IM, with Jackson Klarsfeld and John Hurley placing second and third.

The Red Foxes had three swimmers finish in the top eight for the 200-yard freestyle with Michael O’Donovan leading the way with a third place finish with a time of 1:43.56. Knoll and Coueslant finished sixth and eighth respectively.

Ryan Kaplan led the Red Foxes in the 100 backstroke with a fifth place finish. His time of 52.32 seconds was .2 off from fourth place.

Aiken and Gallino picked up the top two spots in the 1-meter as well, with Aiken earning a first place finish with a score of 281.80.

O’Donovan closed out the second with a second place finish in the mile. Coueslant finished in fifth and Brendan Rice rounded out the top eight with a seventh place finish.

Divers had a phenomenal day on the boards, with Marist divers taking four of the top five spots. Grace Reeves led the pack with a first place finish, scoring 248.90 points. Grace Casolo, Esabelle Gervasio and Madison Sweeny finished second, third and fifth respectively. Reeves score of 248.90 was a personal best.

Deubel continued to excel this weekend, picking up a second place finish in the 400-yard IM and 200-yard freestyle. Her time of 4:34.45 is one of the top times in the MAAC.

Nowak had another strong performance in the 100-yard backstroke, finishing second with a time of 57.06 seconds. Stureborg finished less than a second behind her for a fourth place finish.

Zimmerman and Poor finished second and third respectively in the 100-yard breaststroke.

The Marist distance swimmers closed out the session with a great swim. Hartmann picked up a first place finish with a time of 17.31.75. Judson and Chan finished in fourth and fifth place.

SESSION THREE
Kaplan finished the 200-yard backstroke in second place with a time of 1:50.87, just .5 seconds from first. His time ranks as one of the fastest in the MAAC.

Knoll had a fourth place finish in the 100-yard freestyle with Violette and Madeira tying for sixth. Klarsfeld had another second place performance, finishing the 200-yard breaststroke with a time of 2:06.34.

Coueslant picked up a third place finish in the 200-yard butterfly with Makarchuk coming in seventh.

Nowak picked up another second place finish, posting a time of 2:02.37 in the 200-yard backstroke. Her time is currently the fastest time in the MAAC. Stureborg and Caroline Farrell rounded out the top eight with fifth and sixth place finishes.

Marist closed out the competition with a third place finish in the 400-yard freestyle relay. The team consisted of Zimmerman, Freud, Butzler and Deubel.

BALTIMORE, MD – The Iona College men’s and women’s swimming and diving teams competed at the H2Ounds Invitational, placing third out of the five teams. Various swimmers from both the men’s and women’s teams set new personal and program-best times.

On the women’s side of things, the host Loyola took first place in the tournament with 1,114.5 points. Marist followed in second at 914.5 points and the Maroon & Gold finished with 793-points, good enough for third. Howard University and Mount St. Mary’s College followed with 408 and 293, respectively.

Freshmen Jalen Ramjohn posted a new school record in the 100-yard butterfly at 49.80, lowering the mark set by Keegan Boisson-Yates in 2016.

Both teams resume training next week. The next meet is scheduled for January 12 at Stony Brook.