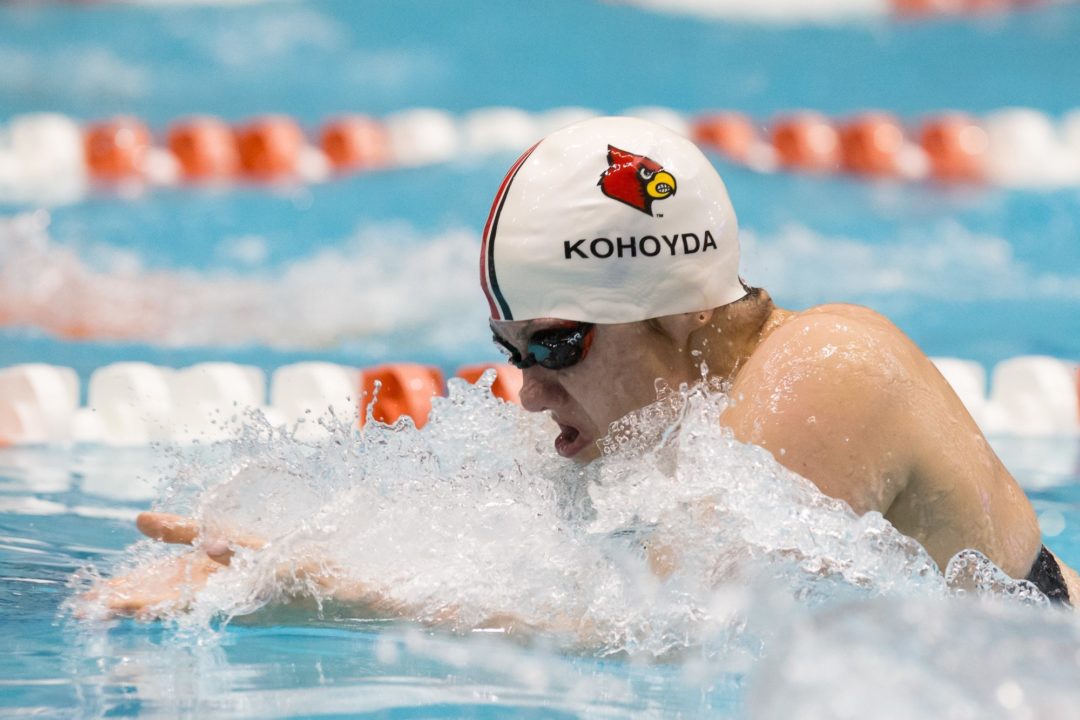 Louisville's Gisselle Kohoyda swam a 2:09.95 in the 200 breaststroke in Tennessee to drastically improve her NCAA Qualifying chances. Archive photo via Tim Binning/TheSwimPictures.com

A pair of Louisville Cardinals were among the big winners at the Tennessee Last Chance Meet that took place on Sunday: a last-grasp opportunity for swimmers to earn NCAA Championship qualifying times.

For women, whose official invite lists are supposed to be released on Wednesday, Tennessee’s last chance event, along with a handful of others around the country, were the end-of-the-line. For the men, there’s still a lot to happen at the Pac-12 Championships this coming weekend, as well as a few other last-chance opportunities.

For Louisville, the two big winners were Gisselle Kohoyda and Pedro Coutinho.

Kohoyda swam a 2:09.95 in the 200 breaststroke. That moved her from 38th-place nationally, which is the definition of “on the bubble” based on how many swimmers were invited to NCAA’s last year, up to 24th place, which is safely qualified for nationals.

Kohoyda, who battled injury last year, was 4th at the 2012 NCAA Championships in the 200 breaststroke as a sophomore.

The other Louisville Cardinal who made a big move was the sophomore Coutinho, who posted a 46.58 in the 100 fly and now ties for 23rd in the country. That moved him up from 37th in the country, and while he’s still not as much of a lock as before, he’s definitely in much, much better shape with Pac-12’s yet to come.

The Tennessee Volunteers also had a big day, possibly earning themselves four more swimmers for the NCAA Championships.

On the men’s side, that includes Renato Prono in the 100 breaststroke. He tried the race three times, and on his final shot went a 53.03, which ties him for 15th in the country and makes him a near-lock for NCAA’s. He had been tied for 38th previously with a 53.49 at SEC’s.

Nolan Tesone was a 1:42.80 in the 200 backstroke; while that was a season-best and moved him to 33rd in the country, it still leaves him as a long-shot for NCAA qualifying.

Demonte was a 1:54.86 in the 200 backstroke, which bumps her up into a tie for 34th. If we can count on at least 1-2 swimmers ahead of her not entering this race, that puts her in solid position.

The Cal-transfer Driscoll swam a 4:12.34 in the 400 IM which moves her to 39th in the country. That’s a dicey position for her to be in, but confident that there will be at least one scratch ahead of her (Liz Pelton), she’s got a chance.

Two other Volunteers, who had no question about their qualifications, had nice swims as well: Lindsay Gendron was a 1:55.60 in the 200 fly, and we’re told that the Tennessee coaching staff is strongly considering that for her as an NCAA qualifying event; and looking for an off-race, Sam Rairden won in 1:45.00.

When are you going to post the first “cut lines” article? I am anxious to see the projections for this year. It seems like things are a but faster in 2014 compared to 2013.