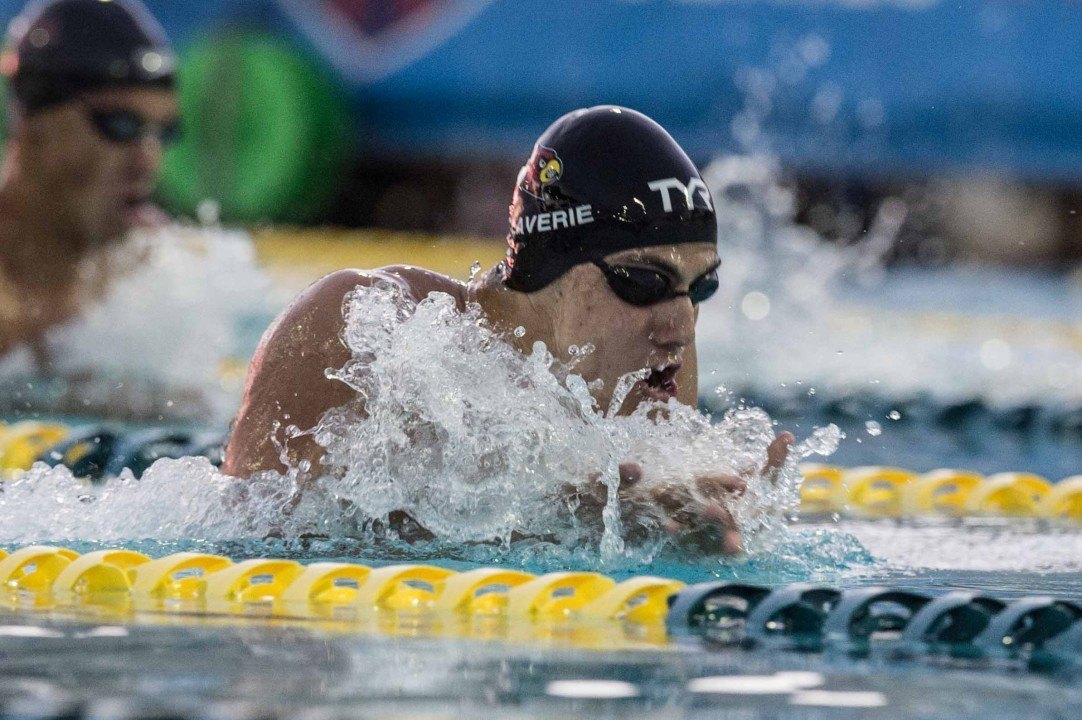 Breaststroker Carlos Claverie was a key player for the Cardinals on the men's side, sweeping his specialty breaststroke races against Missouri All-American Fabian Schwingenschloegl. Archive photo via Mike Lewis/Ola Vista Photography

The Louisville Cardinals hit the road for a dual meet with the Missouri Tigers on Saturday, bringing home the team victory on both sides. All-American Mallory Comerford played a big role in the women’s victory, sweeping the 50 through 200 freestyles. On day 1, she was the only woman sub-50 in the 100 free, winning in 49.60. Comerford turned in a 1:48.72 to take her first win of day 2 ahead of teammate Abbie Houck (1:49.13). She then touched out freshman teammate Avery Braunecker in the 50 free, winning her 3rd race of the meet with a quick 23.25 to Braunecker’s 23.36.

Breaststroker Carlos Claverie was a key player for the Cardinals on the men’s side, sweeping his specialty breaststroke races against Missouri All-American Fabian Schwingenschloegl. In the 100 breast, he won a close race with his 54.23 to Schwingenschloegl’s 54.51. He was more dominant in the 200 breast, however, as he won by over 3 seconds in 1:57.35. Claverie’s additional win came in the 200 IM, where he touched in 1:48.97.

Claverie’s teammate Grigory Tarasevich, a backstroke specialist, was also instrumental to the Cardinals’ win. In the 200 back, he charged to a 1:44.36 to outpace Missouri backstroke standout Carter Griffin (1:45.26). He then rocked a 48.00 in the 100 back to win ahead of Mizzou freshman Daniel Hein (48.89).

The University of Louisville No. 6/11-ranked men’s and women’s swimming and diving teams won 16 races, including all four relays to sweep the No. 6/12-ranked Missouri Tigers Saturday afternoon at the Ralph Wright Natatorium. The Cardinals also added five more NCAA B-cuts on the second day of racing in the two-day format.

“It is a great win because we have great respect for Missouri and their coaching staff. I had an opportunity to coach a number of them on the US National Team earlier this year, but the credit goes to our seniors single-handedly carried the teams against a really good team coming into our house. The final scores are a little bit skewed because it was a much closer meet throughout the whole meet.  We will take it,” said UofL head coach Arthur Albiero.

The Cards were led by Mallory Comerford‘s four wins (200-free, 50-free and both relays).  Andrea Cottrell was a three-time winner with wins in the 100-breast, wins the 200-IM and the 200-medley relay.  On the men’s side, the Cards were headlined by Grigory Tarasevich‘s hat trick, winning the 100-back, and both relays.  Trevor Carroll had three wins, touching first in the 200-free, and both relays.

The slimmest of margins separated the top two spots in the 100-breast with Louisville’s Andrea Cottrell winning by one one-hundreth of a second, boarding a 1:00.87 ahead of Katharine Ross’s 1:00.88. Caitlin Ahern was third with a 1:05.03.

There was a duel down the stretch in the men’s 100-breast but Louisville’s Carlos Claverie held off the Tigers with a 54.23 to beat MU’s Fabian Schwingenschloegl‘s 54.51 with both times making the NCAA B-cut.

The Cardinal women swept the top three spots in the 50-free led by Mallory Comerford‘s 23.25. Avery Braunecker was second in 23.36 and Casey Fanz completed the trifecta with a 23.47.

COLUMBIA, Mo. – Senior Michael Chadwick (Charlotte, North Carolina) and junior Kira Zubar (Chaska, Minnesota) both earned victories during day two action but the No. 6/12 Mizzou swimming and diving teams fell to No. 8/11 Louisville Saturday in the second day of a two-day meet. The Tiger men fell 224-147, while the women were defeated 249-123.

Chadwick’s win was his third of the meet, as he also claimed two victories in Friday action. On Saturday, the senior took top honors in the 50 free after a swim of 20.04. Chadwick placed first in both the 100 free and 100 IM a day ago.

The Tigers earned second-place finishes in both the men’s and women’s 100 back and 100 breast. Senior Katharine Ross (Des Moines, Iowa) was barely outtouched by 0.01 in the women’s 100 breast to earn second in a time of 1:00.88. On the men’s side, senior Fabian Schwingenschlogl clocked a 54.51 for his runner-up finish.

In the 100 back, junior Hannah Stevens (Lexington, Kentucky) took second for the women in 54.49 and freshman Daniel Hein (Sycamore, Illinois) was second for the men in 48.89.

Ross added another second-place finish in the 200 IM after touching the wall in 2:03.21, while freshman Nick Alexander (Crestwood, Missouri) earned runner-up honors for the men in 1:50.59.

The Tigers return to the pool on Friday, Jan. 20 when the teams host Drury at 5 p.m. CT at the Mizzou Aquatic Center.

If you check out the results there’s a weird result in the men’s 200 free:

It happens occasionally. My understanding is that the J means that the judges determined that the order of finish shown by the timing system was wrong.

The meet was in Louisville

IF IT WAS IN MIZZOU-RAH, WOULD HAVE BEEN A DIFFERENT STORY. MIZ!!!!