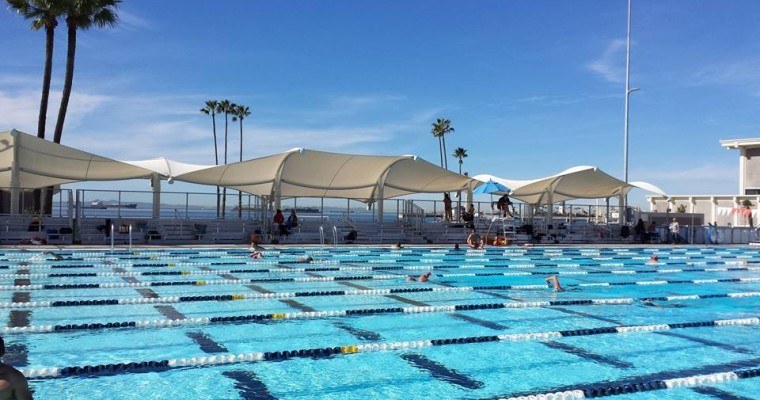 There’s some good news and some bad news for the ongoing $103.7 million project to renovate the historic Belmont Plaza Pool in Long Beach, California.

The bad news is that the city has far less oil profit money with which to fund city improvements. According to The Long Beach Press-Telegram, the city of Long Beach has been budgeting its Tidelands Coastal Improvements projects based on oil selling at $100 a barrel for the past few years. Oil, though, has traded at only a percentage of that total, somewhere around $60 a barrel.

According to the Press-Telegram, that leaves the city significantly short of its proposed project funding needs:

“To put it in perspective, there is about $230 million-plus worth of projects over the next five years in need, and the city has identified approximately $95 million in funds available to fund those needs,” said Assistant City Manager Tom Modica.

That means the city had to prioritize this week on which of its proposed projects were most important to fund.

That’s where the good news comes in for the Belmont project, though. The pool replacement was placed at the top of the priority list that was approve by a 7-0 vote this week, the Press-Telegram reports.

Belmont is one of the most historic pools in the United States, having hosted multiple high-level club and NCAA meets, including the U.S. Olympic Trials in 1968 and 1976.

The old pool was declared seismically deficient and closed just over two years ago, and ever since, a plan has been in motion to rebuild the facility.

The pool was originally slated to open in 2017, but the Press-Telegram reports that some residents are worried the pool rebuild is taking too long. It’s been two years since the old pool closed down, and construction has yet to start on the new facility. The Press-Telegram reports that the earliest construction could start is in about 18 months, which would be at the very beginning of 2017.

The old pool has been demolished, and you can watch time-lapse footage of that demolition here.

I have seen the plans, shouldn’t there be something for 5 and unders. Some sort of water play area incorporated? The design looks great but the little kids need more and ahould be given more.

What this story doesn’t tell you is the reprehensible things city government is doing to raise funds for this boondoggle project. Like, having their cops stop old men in their late 60s riding bicycles at night, terrorize them, beat them up. and then write $638 tickets. Yes, that happened to me, and the vice mayor, mayor, (Dr. Suj) and city manager are not the least bit apologetic. Even though I have an LB ambulance report that shows my blood pressure was dangerously high and I was in a state of panic after the “pain compliance” done on me by these scoundrels in uniform. Three infractions I was written up for. One more in the next 4 months and I am… Read more »

Many of us have questioned city staff about the total cost. There are several factors in the overall cost that Greensboro did not face. 1) the cost of the demolition of the original pool and structure. 2) California building codes are generally more rigorous than in other parts of the country. 3) The foundation work will be extensive for seismic safety, as the site is on wet sand, in a liquifaction zone. 4) The California Coastal Commission (which has to give the final approval for the project) has stated that the floor of the project must be constructed at least 7 feet higher than the old facility, due to an anticipated rise in the sea level from climate change. 5)… Read more »

A seven foot change in sea level would flood the entire community of Belmont Shores and much of downtown Long Beach. I doubt they were too concerned with the pool floor grade being above level.

Does anyone know why this is costing $103 million +? The Greensboro Aquatic Center for instance completed in 2011, cost almost $19 million and has a 50 meter pool, a 25 yard pool and a 25 yard long diving well. I know there is also an outdoor 50 meter pool at Belmont, but what am I missing that is driving the price up so much higher than Greensboro?