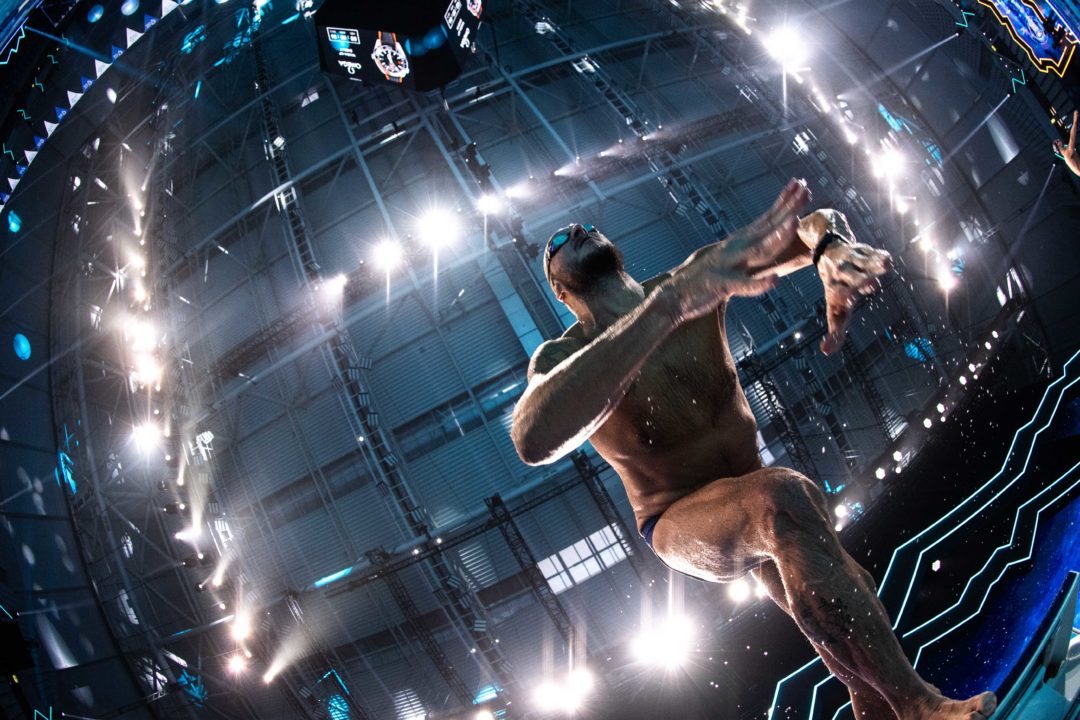 The London Roar had the top 2 swimmers in the men's 50 back on Sunday: Christian Diener and Guilherme Guido (above), but the women's choice was less obvious. Current photo via Mike Lewis/ISL

The London Roar, winners of both the men’s and women’s medley relays, have chosen the backstroke races as the two skins events for Monday’s session.

Under new ISL rules for 2020, the winner of the medley relays on day 1 of the meet choose the strokes for the 50 meter ‘skins’ races on day 2 of the meet. In those ‘skins’ events, 3 rounds of 50s are held in succession with a short break, with the field being whittled from 8 to 4 to 2 swimmers.

The men’s choice for the Roar was rather straight-forward. Christian Diener and Guilherme Guido finished 1-2 in the individual 50 back on Sunday with times of 22.76 and 22.90, respectively. Iron’s Guilherme Basseto finished 3rd in 23.16.

For London, that means they have the top 2 contenders (and the 2 fastest 50 backstrokers in ISL history) racing for them against a field that lacks any real superstars, or arguably even stars, to upend them.

The women’s choice was less obvious.

There were 2 reasonable choices for the London Roar on the women’s side: breaststroker and backstroker.

So, while they would have been favored to win there, they likely only would have had 1 swimmer advance beyond the prelims.

On the other hand, in the 50 back, London’s Maria Kameneva and Kira Toussaint went 2-3, both losing to DC Trident’s Linnea Mack. So while neither swimmer on paper enters as the favorite, at least in the first round, they have a better chance of advancing multiple swimmers to the semi-finals.

Toussaint, who was 3rd in the 50 back, might actually be the favorite if she comes safely through the opening round – she was 2nd in the 200 backstroke on Sunday.

With what we saw happen with Jackpot points in the skins events on Saturday in Meet 1, it’s clear that unlike last year, winning can be far more important than getting multiple swimmers into the semi-finals. And Atkinson had easily the best 100 breaststroke time of the field on Sunday, showing that her endurance is in check too.

It may not matter. What might be most important for London is to simply “not get Jacked” rather than “to win,” given that they enter Sunday with a 97-point lead, and with 2 swimmers in the semi-finals, you get a little more control over that.

Regardless, London enters day 2 of the meet with the upper-hand against a field that they’ve generally overwhelmed so far.

The Trident, currently in 4th place, will celebrate. They’ve got the best chance besides the choosers from London, to win a skins race. What we learned on Sunday is that there really isn’t much movement to be made in the skins unless you are the winner, and so having a chance to win is ultimately what matters.

If Murphy were here would be a great race

I am talking about the skins

On the 50 itself Murphy would been 3Rd only Here

Lazor got dead last in the 50, she’s not a great sprint breaststroker, I would understand this choice. Even if she has the endurance not much confidence for her on the first round. If Mack was disqualified for a 15 m violation Roar would’ve gone 1-2 in the 50 back, and this could give them more highly placing swimmers. Toussaint looks perfect for this race: superb at the 50 (maybe her primary event) and also did great in the 200 (range and endurance).

Also, typo – should it not read “Toussaint, who was 3rd in the 50 back, might actually be the favorite if she comes safely through the opening round – she was 2nd in the 200 backstroke on Sunday”? TYVM