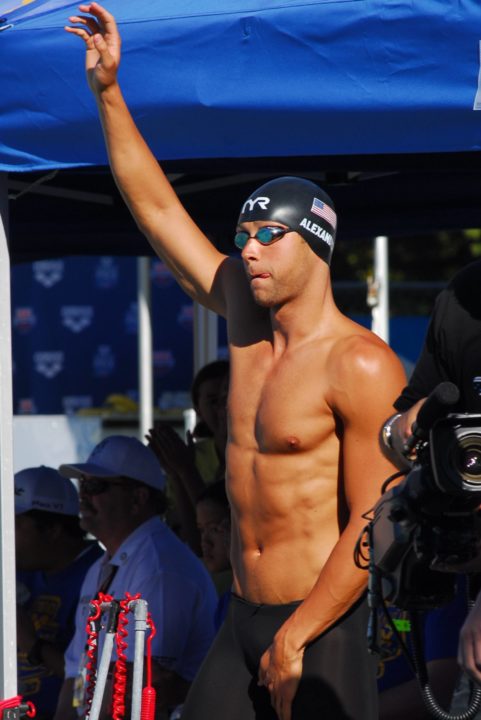 Mike Alexandrov has been on fire this year, but he'll face his biggest challenge yet in the young Kevin Cordes in Sunday's 100 breaststroke. (Photo: Bill Collins)

The final day’s preliminary session at the 2013 Santa Clara International Grand Prix will see more good races, though perhaps much of the excitement on this day will shift to the women’s side (as compared to the men who have stolen the show thus far.) That includes the 100 backstroke, where Australian Emily Seebohm, who has looked tired at this meet, will swim against Missy Franklin, Megan Romano, Rachel Bootsma, and Liz Pelton, among others.

We’ll also get to watch Franklin race the 200 IM, which is a potential final-day, nothing-to-lose race for her at the World Championship Trials later this month.

On the men’s side, Kevin Cordes will go for another big breaststroke swim, but this time will run up again Mike Alexandrov, who has been hard to beat in the 100 at this year’s Grand Prix Series.

None of the really big-name American 200 butterfliers are at this meet, aside from Tosky who swam it at Worlds in 2011. She looked strong coming into the wall, so she may have enough to get down to a 2:10 in finals.

For Medrano, who didn’t have a great meet at the Olimpiada Nacional earlier this year, that’s easily a season-best time.

There were lots of off-event entries in this race, including Elizabeth Beisel, who was 4th in the heats in 2:13.31.

Maya DiRado from Stanford didn’t swim the 400 IM, perhaps her best race, at this meet, but taking on her first 200 fly of the long course season she clearly still had it on her mind. She was a 2:13.63, which is a lifetime best, to place 5th in the prelims.

One of the lesser-spoken-of names from the Junior Pan Pacs team is 16-year old Justin Wright from Fresno, but if he continues to swim this well, he’ll have a name for himself in no time. He was the lone swimmer under two minutes in prelims of the men’s 200 fly, swimming a 1:59.69 to just miss his personal best.

Michael Klueh, Nico van Duijn, and Tom Kremer were also 2:00’s, and Zack Chetrat from Ontario rounds out the A-Final in 2:01.14.

Note: Tom Shields, who is the fastest ever (tied with Phelps) in yards of the 200 fly, scratched the event, as did Conor Dwyer.

Jessica Hardy went out fast in this women’s 100 breaststroke, turning in 32.33, but she won’t be alone with her early speed in tonight’s final. She’ll be front-and-center after a 1:08.32, but Laura Sogar (1:08.72) and Alia Atkinson (1:08.84) were both as fast, if not faster, over those first 50 meters. One would imagine that Sogar, who is a great 200 breaststroker as compared to the other two, will have more on the back-half of her race in finals.

For Dittmer, in 1:10.45, that’s a new Mexican National Record, though unofficially as Mexico hasn’t updated their official records listing since 2011.

American Kevin Cordes had a controlled prelims swim in the men’s 100 breaststroke, just like he did in the 200, but still put up the second-fastest seed of the morning in 1:01.54. He sits behind New Zealand’s Glenn Snyders, who’s training at the Trojan Swim Club, who was a 1:00.79 in prelims.

Snyders has largely struggled since the Olympics at in-season meets (though he was good at the NZ State Open Championships) in stark contrast to typical Salo swimers, but it seems like he’s now falling into a groove: this is his best in-season time of the year.

Azad Al-Barazi, Richard Funk, BJ Johnson, Scott Weltz, and Clark Burckle are all in the A-Final as well; Weltz and Burckle were both 1:03’s.

The top three seeds in the women’s 100 backstroke were all Cal Bears, and all either freshmen-or-sophomores to be. Liz Pelton took the top seed in 1:00.91, Rachel Bootsma was 2nd in 1:01.31, and Missy Franklin  was 3rd in 1:01.49. Despite the latter two being the Olympians, it would be hard to count out Pelton in finals given how well she’s swum at this meet so far.

Georgia’s Megan Romano is the 4th seed in 1:01.84, and Australian Emily Seebohm was 5th in 1:01.86. As good as she is, and she’s a World Championship contender, Seebohm is unlikely to be able to compete with those top three in finals.

Ryan Lochte really seems to be challenging himself at his meet to go harder than he probably needs to in multiple rounds of multiple races, and in this 100 backstroke tonight will look for his 4th event win of the meet after taking the top seed in 54.95.

He was out in 27.0 at the turn, as was Australian Bobby Hurley and New Zealander Corey Main the 2nd and 3rd seeds, but Lochte was able to close a little bit better than his southern-hemisphere counterparts. Hurley was 55.17 and Main was 55.28.

Olympic Champion Matt Grevers was a 55.35 for the 4th seed, and was followed by Eugene Godsoe and Arkady Vyatchanin in 55’s as well.

Japan’s Junya Koga and American 19-year old Jacob Pebley were the last two under 56 seconds, and Wisconsin’s Drew Teduits found his way into the final with a 56.81.

Another sleepy preliminary race on Sunday saw Caitlin Leverenz and Liz Pelton with the only really strong performances of the morning heats of this 200 IM. The two Cal swimmers went 2:14.32 and 2:14.64, respectively, though they got there in totally different ways. Leverenz did it by way of a 37-second split on her beaststroke, and Pelton did it with a 1:02 on her front-half. The race tonight could come down to the final freestyle leg, where the advantage would have to go to Pelton.

Maya DiRado, Jasmine Tosky, Marni Oldershaw, and Celina Li will round out the A-Final with three 2:16’s and a 2:17 for Li.

A member of the Gator Swim Club training group took the top seed in the men’s 200 IM, but it wasn’t the one you’re thinking of.

Conor Dwyer took the top seed in the 200 IM with a 2:02.35: that’s not really close to his best time, as we’ve seen him do time-and-time again at this meet, but a very fast opening half of 57.4 puts him in the top position for this evening’s finals.

Michigan’s Kyle Whitaker was the 2nd seed in 2:03.17, and Ryan Lochte sits 3rd in 2:03.44. Lochte didn’t really push anything too seriously until the last 50 meters, where he had the fastest freestyle split.

just saw who held the meet record…KATHLEEEN HERSEY!!!! She’s not retired is she? Havent seen you race this year. She’s only like 21/22…so much more potential! Would love to see her finally get an olympic medal!

Kathleen is probably 24-25 years old. Not sure she is officially retired or not but not swimming this year.

Dwyer & Shields both scratched the 200 Fly. We’re not worthy. 🙁
Thank got for good old Tyler Clary.

Long course, Shields is a one trick pony.