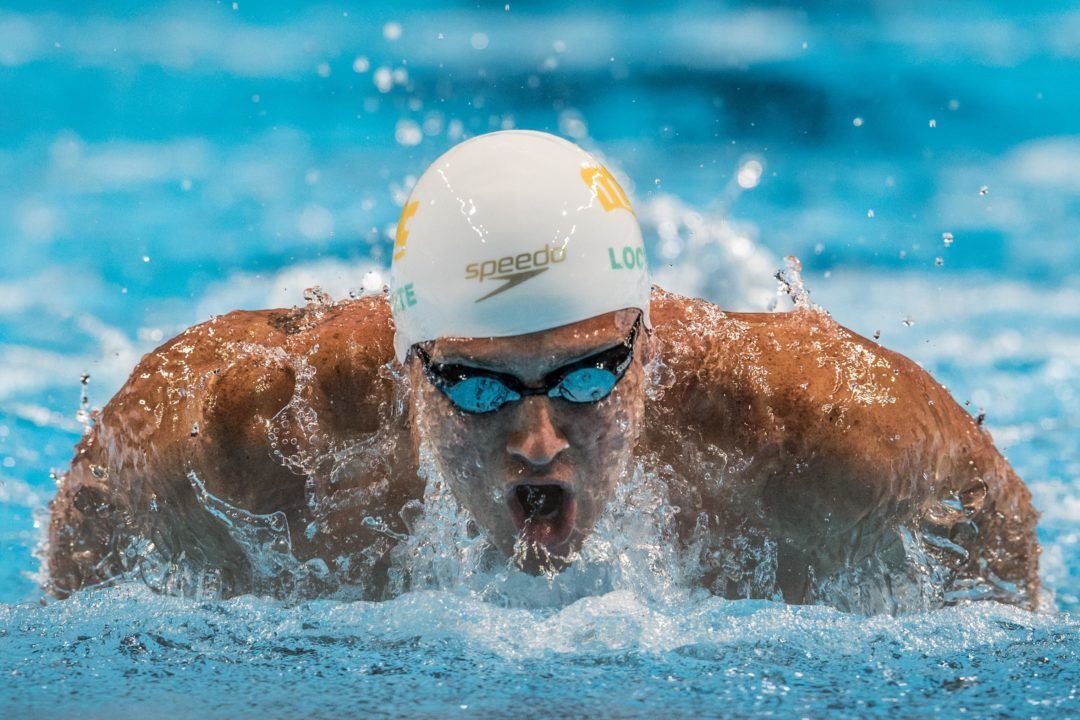 Probably the biggest story that swim fans are expecting is a first look at Ryan Lochte racing since his Rio suspension. Current photo via Mike Lewis/Ola Vista Photography

Hannah Hecht contributed to this report.

The U.S. Open will kick off on Wednesday, August 2nd, in Long Island. Probably the biggest story that swim fans are expecting is a first look at Ryan Lochte racing since his Rio suspension. Lochte said he’d be back for the LA Invite a couple of weeks ago, but ended up no-showing the meet. You can read more about Lochte’s return here.

Lochte is only entered in two events this week– the 100 backstroke and the 200 IM. Lochte is a former world record holder in the 200 back, but he’s since shifted from backstroke to freestyle and IM, and the 200 IM is his best event.

Odds of Lochte swimming this meet? 1%. I want to say 0 but I learned never to say never with Ryan Lochte.

Metropolitan Swimming is promoting an autograph session with Lochte for its swimmers, so I have a hunch he will be there.

I am glad to be wrong. Looks my forward to see how he does.

hopefully he does because there were people he was supposed to meet at LA Invite that he didnt show up for. But US OPen is a bigger meet so hopefully he will.

It used to be on the USA swimming website. Hopefully it will be the case again this year.

Haven’t found anything yet. Anyone have a link anywhere?

That meet is the summer taper meet for the foreigners and a warm-up for US swimmers who will go to WUGS and world juniors.
Lochte is of course the story of the meet.
Rooney trains with Dressel. He must have been inspired by his teammate’s accomplishments. Time for him to confirm all the promises he has shown in the junior ranks. It would help a lot the US 4X200 free relay in the future.
In the biggest US young names, there are Cassidy Bayer, Gretchen Walsh, Eva Merrell, Erica Sullivan, Zoe Bartel, Vanessa Pearl, Michael Andrew, Dare Rose, Ella Ristic, Joy Field, Madison Homovich, Allie Raab, Zoe Bartel, Kenisha Liu, Tristen Ulett, Margaret Aroesty or Sam Pomajevich.

Hey bobo someone you should lookout for at this meet is Jewels Harris, going to swim for Auburn this season. Great Fly/Backstroker. Should look at her progress.

Small british squad here as well with some big names like Chloe Tutton, should be cool to watch.

Yeah, I have a feeling we are going to see big things from Rooney!

I am sure he will have a great meet but I highly doubt he is fully rested with WUGs three weeks out. More than likely this is a training meet.