Like Ervin, Sam Rivera Embraces Tourette’s to Excel in the Water 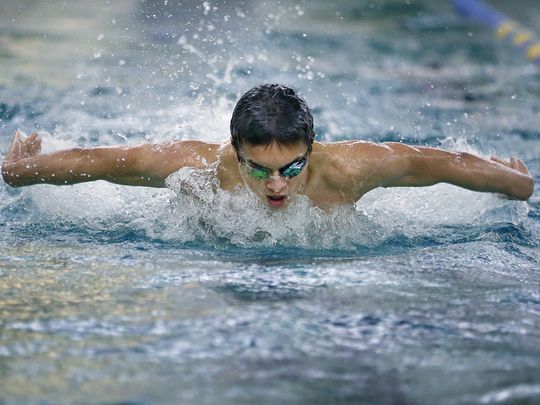 Ask any serious swimmer, and they will tell you that the pool is a place for working out both physically and mentally.

For Brighton High School freshman Sam Rivera, a swimmer who boasts more triple- and quad-“A” cuts than not, and recently won Niagara Sectionals, the mental aspect has been life-changing.

Rivera was diagnosed with Tourette’s Syndrome three years ago, but has struggled with anxiety, depression, and ADHD for much longer.

“We didn’t really know that I had Tourette’s or anything up until last year actually, and before that everybody just kind of thought I was looking for attention,” Rivera told SwimSwam. “Sometimes I make noises, and a lot of people thought I was just doing that to be funny and be a clown, but in reality, it was just a tic.”

Rivera now embraces his unique strengths, which he once saw as isolating weaknesses, to improve his swimming.

His sentiment is one shared by 3-time Olympic gold medalist Anthony Ervin, who in his teens and early career learned to embrace his own Tourette’s diagnosis to empower him behind the blocks.

Among the contributing factors for Ervin was the ability to manage his anxiety in high-pressure situations, and a unique knowledge of how to relax and control his body, he told USA Today in 2017.

Sam’s mother, Leslie Hunter, added that Sam’s ability to vocalize his experiences, as well as the changing stigma around mental health, have contributed to his development: “Another piece is, of course, there was some reluctance to be verbal about it, but being verbal and acknowledging it allows you to own it, which then decreases some of the anxiousness within, that sometimes gets translated to the outside world as, as a negative.”

“We tried medication for about three weeks – this was two or three years ago – but it made me super drowsy and my practicing wasn’t very good,” Rivera said. “So I got off the medication and just focused on strategies to help cope without any medication.”

Additionally, Rivera credits his teammates with helping him excel in practice.

“My club teammates as well as my high school teammates, a lot of them don’t even think of me as having Tourette’s or ADHD – well, the ADHD is pretty obvious. I’m just another teammate, and they just push me to be my best without any discrimination,” he said.

His mother also credits Sam’s coaches for offering him a safe space to evolve both as a swimmer and as a person.

“Finding that person, that person that you trust – the coach, a school counselor, a mental health provider… I have to give a lot of credit to the very first coach who met him every step of the way,” she said. “The good, the bad, the ugly, the emotional, the frustrated, the angry – just put there, wasn’t leaving. Finding that one person, that one mentor, really, really, especially with any kind of disability, is key.”

But when it comes to a strategy for success, for Rivera, it all goes back to mental game.

“Just keep a winning mindset; Don’t let anyone keep you down,” he said. “Stay focused on giving all you’ve got in practice and not selling yourself short. And don’t let anyone get into your head at meets, just stay in your zone and use your gift to push past everyone else.”

Is Ervin planning to compete this summer for a spot on the US 2018 Pan-Pacific and 2019 World’s teams? Haven’t heard a lot about him since he took a knee during the playing of the Star Spangled Banner at a meet in Brazil some months back.

Dont know what his choice on whether or not to stand during an anthem has anything to do with his intentions for the summer but… I believe he is entered in a meet in Irvine this weekend.

Not a fan anymore. He can go away.

People who don’t stand during any anthem are just plain rude. They need to grow a pair and get over themselves!!

I take it ur probably white..?

Actually, no. Just not an ignorant person.

Well that’s ironic because it was actually a fairly ignorant thing to say, as it has nothing to do with rudeness. Athletes who kneeled were doing so as a form of protest (exercising their 1st amendment right) against the racial injustice that they feel takes place in our country. It has nothing to do with disrespecting the military or being “rude” or any of the other things that people who don’t agree with them try to accuse them of, rather it is a way of getting people to talk about important issues in our society and take action to improve our country for everyone

That has nothing to do with the subject here .

GAHHH MAN NO MAKE STAND FOR PIECE OF CLOTH CAUSE ME BE VERY MAD!!!

He is doing the 50 free at speedo grand challenge this Saturday or at least he is entered.

Katinka Hosszu is also entered. Her first meet in a long time it would seem.