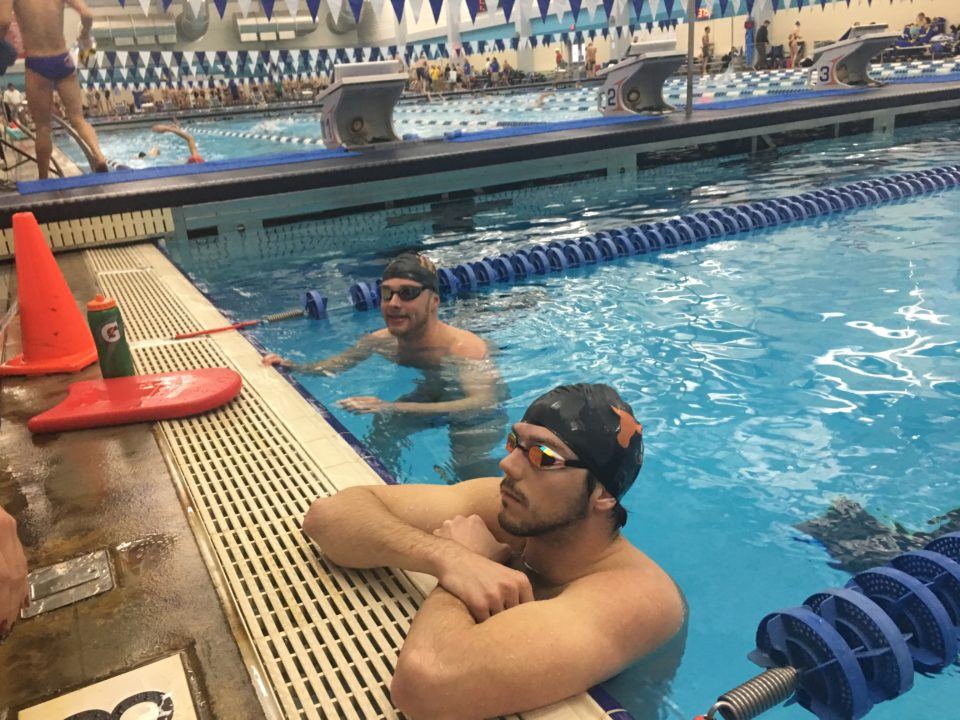 The 50 Freestyle shoot-out at the King Marlin Pro-Am Classic is a fan favorite as it draws some of the top talent in the world for a chance at the double-sized prize of $1200.

This year the women’s field in the tournament-style bracket was all amateur athletes, with the final round a battle between two SEC commits. Springfield Aquatics’ Molly Moore turned in a 23.47 for the final round to fall short of unseating the defending Pro-Am Champion in the event, Megan Keil, who touched at 22.70 for the repeat. These two girls will certainly meet again in the future while on the rosters with Mizzou and Arkansas. LRAD’s Angel Ke snuck past LOBO’s Sara Vianco for third, 23.46 to 23.60.

The men’s shoot out saw eventual champion Jack Conger get faster in every round, finally taking the crown when his 19.23 bested fellow Longhorn standout Tripp Cooper who landed a 19.86 for the $600 second place prize. Michigan commit Patrick Callan from Trident hit 20.78 in the final round to keep ATAC’s Seth Bailey and his 21.16 off the podium.

Reese Hazan from Sandpipers of Nevada claimed her first win on the weekend by almost three seconds in the 200 Breast with a big lifetime best 2:18.63. Lakeside’s Jenna Watson and Texas Ford’s Kiara Xanthos rounded out the podium with 2:21.50 and 2:21.93 respectively.

Sandpipers’ Reese’s Hazan took her second win of the night by a much closer margin in the 100 Back, out-touching Wichita Swim Club’s Astrid Dirkzwager 55.34 to 55.49. Springfield’s Molly Moore joined them under 56 with a 55.73 for third.

Bryce Bohman was in a class by himself in the 100 Back, taking the event in 46.46. Once again, Wichita’s Ben Patton was the top amateur, but this time for second place with 49.88. Fond Du Lac Swim Club’s Andrew Rodriguez claimed third with 50.99.

Sandpipers of Nevada claimed both the men’s and women’s 400 Medley Relay titles. Hazan, Emma Breslin, Freeman and Victoria Gutierrez won the women’s race in 3:46.90, while the men’s squad of Nicholas Becker, Ahmed Mohamed, David Miller and Joseph Gutierrez combined for 3:25.80.