Less Than A Year Out From Tokyo, Olympian Emily Seebohm Changes Coaches 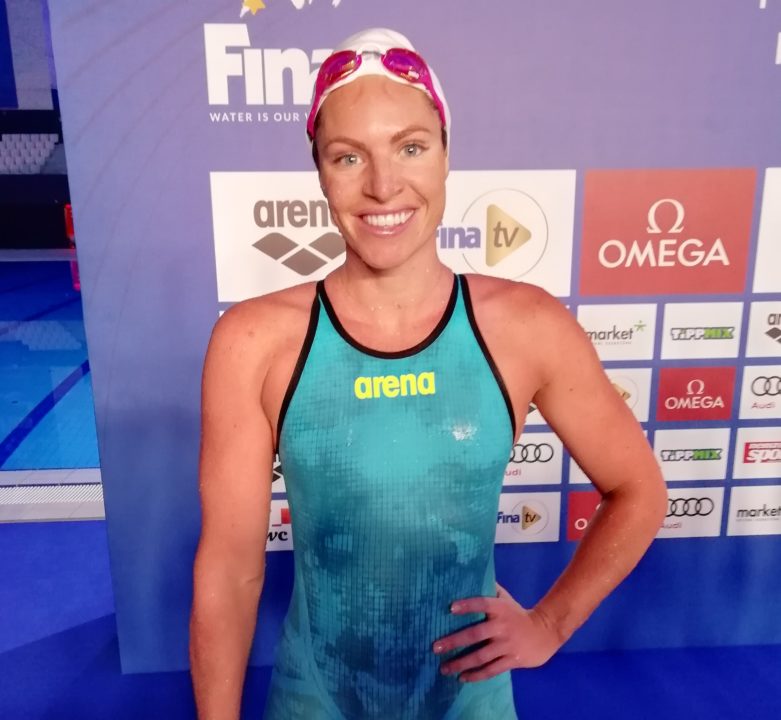 World Champion and Olympic medalist Emily Seebohm of Australia has moved her training home less than one year out from the 2020 Olympic Games. Archive photo via Adrian Mancebo/SwimSwam

Mitch Larkin will race both the 200 back and 200 IM during day 4 finals, having posted the top prelim swim in the back and the 3rd fastest in the IM.

Larkin is now the second-fastest man in the world this season, trailing only fellow 2016 Olympic medalist Evengy Rylov’s 1:53.23.

With less than a year to go until the 2020 Summer Olympic Games in Tokyo, Japan, 27-year-old backstroking ace Emily Seebohm of Australia has changed up her training home.

Seebohm has been training under coach David Lush at Brisbane Grammar in Brisbane, Queensland since 2015 but has confirmed to SwimSwam that she is now located at Griffith University on the Gold Coast under coach Michael Bohl. Griffith University is home to Olympic medalist Emma McKeon, Olympic finalist Taylor McKeown, Olympian Georgia Bohl, among others.

Seebohm was the 100m back and 200m back World Champion at the 2015 World Championship in Kazan, Russia, but she fell short of the podium in both events at the 2016 Olympic Games. There in Rio, however, Seebohm was a member of Australia’s silver medal-winning women’s medley relay.

The 2017 World Championships saw Seebohm gut out gold in the 200m back, representing the nation’s sole individual gold in Budapest.

Along the way, Seebohm has been hit with difficulties outside the pool, including a knee dislocation in 2015 and surgery for endometriosis in 2017. Seebohm also had a rough break-up with Olympic medalist Mitch Larkin in 2018.

Before this year’s World Championships in Gwangju, Korea, Seebohm, was usurped by young guns Minna Atherton and Kaylee McKeown, both of whom finished ahead of the veteran at the Aussie World Trials. That left Seebohm at home for Worlds, and time to ponder her next move.

Atherton had long been Seebohm’s training partner under Lush at Brisbane Grammar, with the 19-year-old busting out the best year of her career. She clinched 3 medals at the 2018 Short Course World Championships, including individual bronze in the 100m back. She followed that up with silver in the 100m back in Gwangju, along with mixed medley relay gold and women’s medley relay silver.

Seebohm has been back to racing already, hitting the first cluster of the 2019 FINA World Cup Series. She ranked 3rd in FINA points after the first 3 stops, sitting behind Hungary’s Katinka Hosszu and Aussie teammate Cate Campbell.

Bohl told SwimSwam that Seebohm joined his squad approximately 10 weeks ago, kicking off the first week after Aussie World Trials.

Dang a lot of switches happening it seems

Seebohm ha# lost her position permanently. Minna Atherton and Kaylee McKeown will now be battling with Mollie O’Callaghan for 2020. There are some young kids coming through the ranks that are really fast and are smashing records. 2024 Olympic trials will be awesome for Australian swimming.

Any one of those 3 kids go in with your mindset and she’ll wipe the floor with them. Seebohm loves adversity just look at 2017 in Budapest. You count out the Aus backstroking Queen (and Queen she is) at your own peril.

Seebohm is one of the best swimmers in Australian history. She is far from out of the mix here. None of those girls have actually swam faster than her best time.

Wouldn’t say she’s out of the selection picture. Atherton has yet to really “nail down” the 200 and whilst McKeown’s 100 has made some significant progress, she’s yet to break 59sec and its likely to need that to qualify for Tokyo. O’Callaghan looks an excellent prospect but she’s yet to break the minute; whilst that looks on the cards for 2020 she’s going need to drop a lot more to nab one of those spots.

Having said that she’s not out of the picture, her performances were erratic in 2018 and she’s been well off the pace this year so she’ll probably need to re-find her 2017 levels to qualify. Her “window” for individual Olympic gold has probably closed; we’ll… Read more »