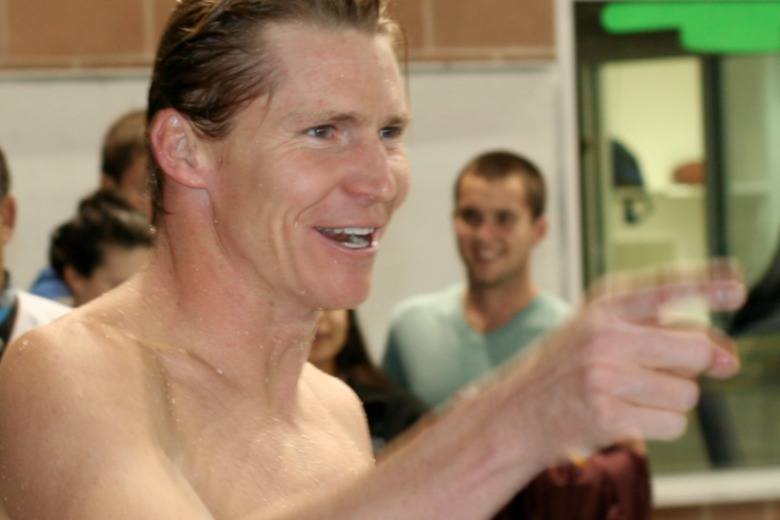 Today, August 13th, is annual International Left Handers Day where we take a moment to celebrate all those who have not just survived but thrived in this right handed dominant world.  I am very proud to be left handed, my wife is left handed, and our first born son is left handed.  Whenever I meet another left hander we wink at each other kind of like X-Men do when they meet each other because we are both aware of our special giftedness. For example:

In honor of the great left handed swimmers like the fastest woman in the world right now, Ranomi Kromowidjojo, 3 time Olympian Ian Crocker, 6 time Olympic Coach Eddie Reese and the legendary Mark Spitz, we always start our one arm drills in swimming with the left arm.  So if you’re training today remember to do left arm first on butterfly, backstroke and freestyle one arm drills to pay homage to all the left handers that make this world a better place.

Although we can’t transfer our God given “specialness” to you right handers out there, here are two interesting studies that might help you perform more optimally like us left handers:

1) By squeezing a ball with the left hand, which activates the right hemisphere of the brain, participants in a 2010 study in Israel scored higher on a creative problem-solving test than those who squeezed the ball with the right hand and others who did nothing with their hands.

2) In a 2012 study, German researches found that right-handed athletes were less likely to choke under pressure when they clenched their left fists before competing.  By activating the brain’s right hemisphere this way, these athletes were limiting the probability of overthinking their movements or ruminating (associated with the left hemisphere) and more likely to rely on motor skills developed over years of performance (associated with the right hemisphere). (Success Magazine, pg 12, Aug. 2013)

SwimSwam wants to know who else in the swimming community is left handed.  Today is your today to shine, so left handers stand up and be celebrated.

Some other lefty-swimmers: Anthony Ervin, Conor Dwyer and, if I remember correctly, Becca Mann.

I myself am right handed, but I consider lefties to be among the coolest people on this planet. 🙂

Ringo Starr is left-handed but his drums are set up for a right-hander.