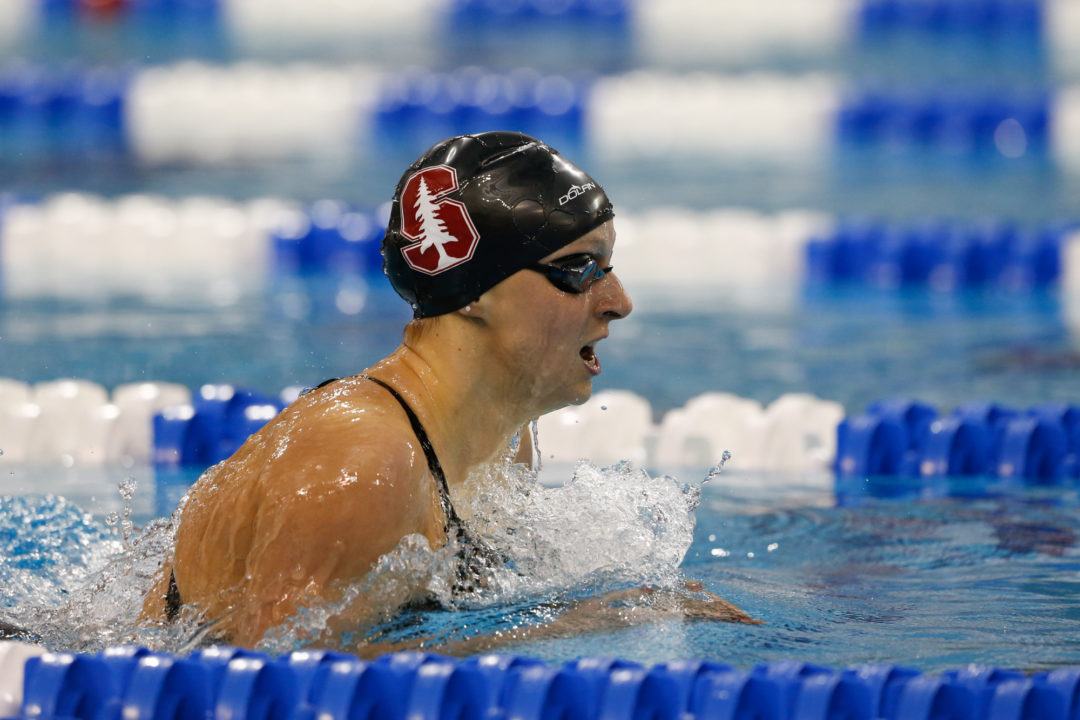 Ransford and Ledecky have been selected as the 2018 Google Cloud Academic All-America® Team Members of the Year for Division I at-large programs. The at-large teams for the Google Cloud Academic All-America® program include the sports of fencing, golf, gymnastics, ice hockey, lacrosse, rifle, skiing, swimming & diving, tennis and water polo for both men and women, as well as beach volleyball, bowling, field hockey and rowing for women, and volleyball and wrestling for men.

Ledecky is one of the most decorated swimmers in history, having earned five Olympic gold medals and 14 World Championship gold medals, as well as 14 USA Swimming national championships. She is the current world record holder in the 400-meter, 800-meter and 1,500-meter freestyle events, broke 11 American records, 15 NCAA records and six NCAA meet records during her collegiate career, and won eight NCAA titles, including 2018 crowns in the 500 free, 800 free relay and 1,650 free (setting an NCAA meet record in the latter event). A nine-time CSCAA All-American and 2017 recipient of the Honda-Broderick Cup and Honda Sport Award, Ledecky announced in March she will forego her final two years of NCAA athletic eligibility (while continuing her academic studies at Stanford) to pursue professional opportunities and train for the 2020 U.S. Olympic Trials after helping Stanford earn its second consecutive NCAA championship.

No less than 38 of the 45 members of the 2018 Google Cloud Academic All-America® Division I Men’s At-Large Team have at least a 3.90 GPA, with 27 student-athletes maintaining a 4.00 GPA (or better) as either undergraduate or graduate students. The 17 members of the first team (which was expanded due to ties in the voting) have an average GPA of 4.01.

On the women’s side, 41 of the 45 members of the 2018 Google Cloud Academic All-America® Division I Women’s At-Large Team achieved at least a 3.90 GPA, with 35 student-athletes compiling a 4.00 GPA (or better) during their undergraduate and/or graduate careers. The 15 members of the first team recorded a 3.99 average GPA.

A lot of smart, fast, hard workers here, but re: Ransford, I am having trouble wrapping my mind around how it is possible to train as a world-class distance swimmer while getting a perfect GPA in MechEng at Michigan. Completely bonkers and so impressive.

Is it known it Michigan gives 3.6-3.7 for an A-? If they do the method where any A = 4.0, that makes it a lot easier. Still a feat: mech engineering is very hard, and Michigan is a very tough school.

Not trying to be negative here, but Dressel and his 3.3 seem slightly out of place…

Yes I wonder how they weigh the GPA against the athletic performance.

Sydney Zupan is a senior and Asia Seidt is a sophomore. No freshman made first team and the only sophomore to do so is Katie Ledecky.

Agree. The 3.3 is an outlier. I wonder if they also consider the rigor of the major and academic standings of the college.

So natural resource conservation gets a bump?

Does it get to be any more “P.C.”? For virtue-signalling purposes, this major carries an automatic bump.

yeah – still a solid GPA though!

Someone please ask what class and what grade resulted in Ledecky getting a 3.99, I guarantee you it drives her more nuts than any swimming struggle she has ever had.

Classes probably have different credit amounts, so an B in a 4 credit class affects someone’s GPA more than a B in a 1 credit class etc.

I was wondering the same thing. Stanford’s scale is a bit odd with an A+ as a 4.3, and A as a 4.0, and an A- as a 3.7, so potentially she got a equal number of A+’s as A-‘s in classes but may have something like one more credit hour that was an A- verses an A+. Personally, I prefer the simple 4.0 scale. It’s much more straightforward.

Those 1 credit hours Bs will get you every time. 😕