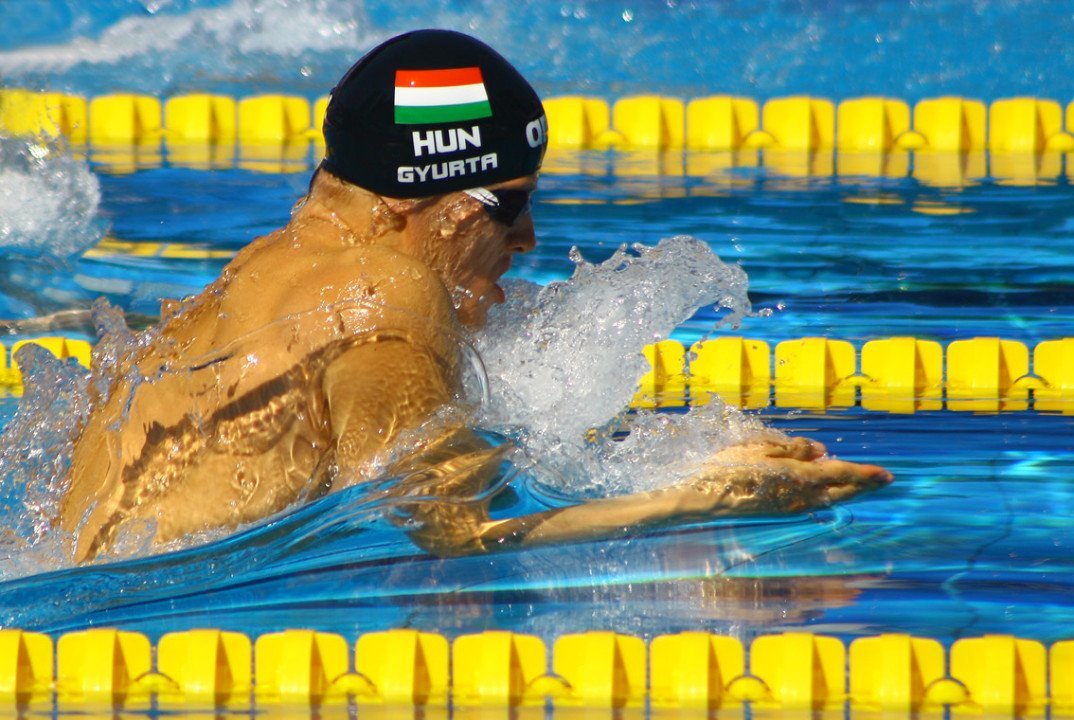 With the short course season officially kicking off this week with the World Cup event in Doha, Qatar, the meet’s organizers have released quotes from some of its bigger names in the prelude to the World Cup circuit.

Among them: a pair of iconic athletes who were out of the headlines in a news-heavy weekend after conspicuous absences in their respective international competitions –  Chad le Clos and Daniel Gyurta.

South Africa’s Chad le Clos is one of the best overall swimmers in the world right now, but sat out of the Pan Pacific Championships along with most of the top South Africans.

“I needed some time out from competing after the Commonwealths, not have the stress of competing all the time,” Le Clos said. “My achievements at the Commonwealths were really amazing, I didn’t think I would get that many medals I was a bit nervous going in to it.”

Le Clos hedged his bets on whether the time off will translate to rest or rust in his return to the World Cup circuit.

“For me this one’s going to be quite interesting because I’ve had a bit of a break for the long course and Commonwealth Games, he said, “so for the European guys and Pan Pacs guys, I think they’ll be in better shape than me.”

Le Clos is the defending World Cup champion, winning the series last year with 574 points. He says he’s taking things a step at a time in aiming for a repeat.

“The aim is to try and get better as each of the seven legs comes along,” said Le Clos. “We’ll see how things go at the beginning and that will determine where we go and which events we swim.

“I’m going to try and defend it again [World Cup title] and keep building up points. If I can get off to a good start in Doha that will be great.”

Perhaps most interesting to fans were the sentiments Le Clos had for his newly-returned American rival Michael Phelps.

“It would be great to race Phelps in Doha,” Le Clos said. “I don’t think he’ll come, he doesn’t usually do short course but it’s always good to race the best.”

He also added that his only real draw to Pan Pacs was the chance to rekindle that old Olympic rivalry.

“If I was going to go to the Pan Pacs that would be the only reason,” he said of a potential race against Phelps.

Hungarian breaststroker Daniel Gyurta was hardly absent at the European Championships, but he did leave a noticeable void in the men’s 200 breaststroke, his signature event, and one he’s dominated internationally for the better part of a decade.

Gyurta sat out that event due to some problems in preparation, according to his coach, but is putting a major emphasis on the short course season. Gyurta will likely return to the 200 breast in Doha as a lead-up to the Short Course World Championships to be held in that same city this December.

The Hungarian was more coy with his goals than Le Clos was.

“I never tell people my targets exactly, keeping them my personal secret,” Gyurta said, “but I intend to improve my current results and my racing style in Doha.

“I pay attention to other swimmers’ preparations and races and learn from them, but I don’t change my preparation if I’m achieving good results. Right now I’m right on track and where I need to be.”

That Gyurta feels good about his status and preparation should be a welcome sign to Hungarian swimming fans, as his decision to forgo the 200 breast at Euros was an odd hiccup in an otherwise rock-solidly consistent career. Gyurta credited his support team for helping him accurately gauge where he’s at at various points in the season.

“I continuously receive help from my team to make sure I am physically prepared for a race,” he said, “but I am lucky that I can handle the mentally difficult situations and pressure as well. I always just keep my eyes on the target.”

Both Gyurta and Le Clos will be back in the news this weekend as the first of seven World Cup stops kicks off from Doha on Wednesday.

Check out the full list of announced entrants thus far in our story from earlier today.