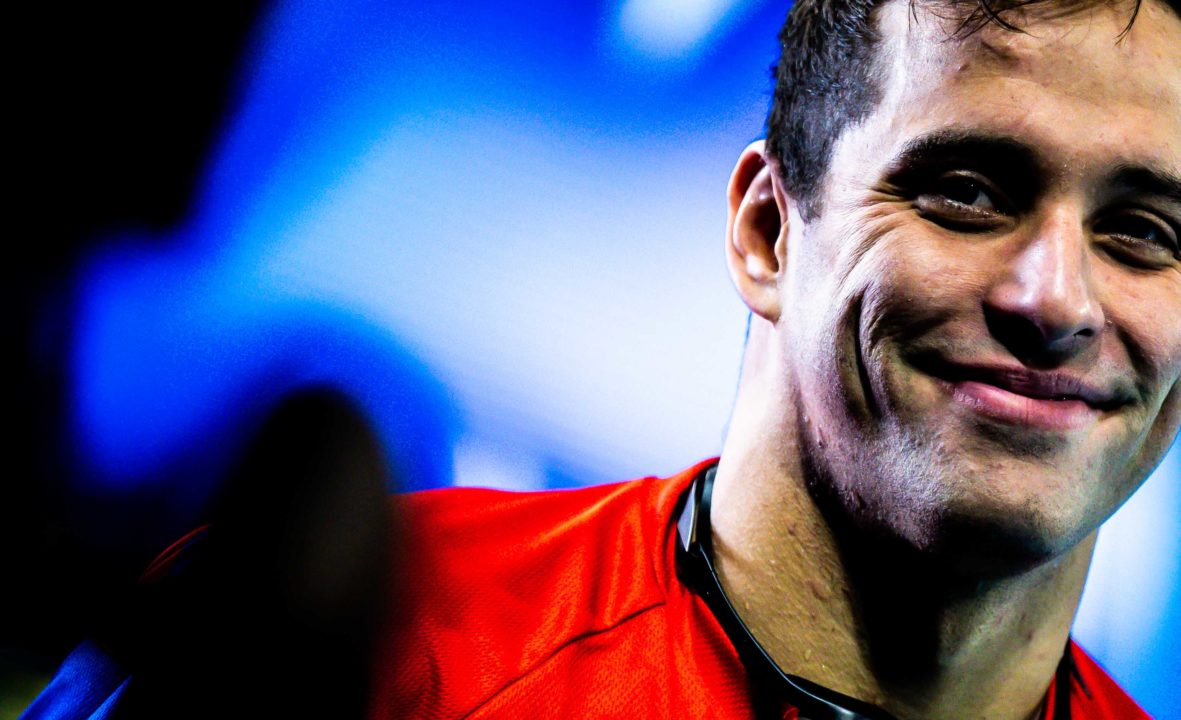 Chad le Clos placed 6th in the 100 fly on day one of the Sette Colli Trophy with his first sub-52 second swim of the season. Milak won gold in the event. Archive photo via Jack Spitser/Spitser Photography

Le Clos, a two-time Olympic silver medalist in this event, described the butterfly fields heading into Tokyo as  “unbelievable.” 200 fly World Record holder Kristof Milak of Hungary won gold in the 100 fly final with the only sub-51 second swim of the field: 50.89.

Le Clos shared with SwimSwam that he was in Hungary with Katinka Hosszu about two weeks ago and reached out to train with 21-year-old Milak.

“I wanted to train with him, but he said no,” he said. In the end, le Clos chalked it up to some miscommunication that was potentially due to their language barriers. “Obviously I wanted to do some sets with Milak…but he was very nice…he seems like a good kid. I’m happy for him and his success.”

The Netherlands’ Kira Toussaintstarted off her Setti Colli lineup with a non-Olympic event: the 50 back. She won silver behind Brazil’s Etiene Medeiros with a time of 27.79,

She’s looking forward to the 100 free and 100 back tomorrow after getting her first race out of the way. “I really wanted to be a little faster, but it’s okay,” she told SwimSwam after her race.  “Onto the next one.”

“I can’t wait to go into taper in two weeks,” Kromowidjojo said with a smile after her race.

She complimented the Australian’s 4×100 free team going into the Olympics. “They’re the absolute favorite..they have four -or I have to say six amazing girls. But anything can happen in the Olympics, especially in a final.”

“I just went for it,” he told SwimSwam after the race. “I wanted to see if I could swim 57 again.”

When asked about the performances of some of his international competition (Great Britain’s Adam Peaty and Team USA’s Michael Andrew) he said he will try to race Peaty in Tokyo and Andrew swam a really good race at Trials.

“We’ll see what the pressure of the Olympic Games does with the rest of the people… I know I can swim 57 again there,” Kamminga said about Tokyo.

Chad…I wouldn’t train with you either. No way. Malik was correct to say no.

Why what’s wrong with chad?

Everyone says this – I’ve not seen any real basis other than the shadow boxing moment. It’s out of proportion.

It’s the narrative NBC constantly pushed through 2016 to make him a villain to Phelps. Other MSM outlets caught onto it here in the US, and now every causal swim fan thinks he is like that. If anyone were to actually take the time to listen to an interview with him (the Brett Hawke one is really nice), you’d see he seems to be a pretty humble, friendly guy.

I don’t think Cseh or Hosszu would be a friend of a cocky person. Or we can see what he’s been doing at home for youngsters in swimming.

I don’t even see what’s wrong with the shadow boxing moment. He follows combat sports, it’s a great way to warm up, and seriously, does anyone think anyone could psyche out Phelps? If you’re not in your own head in the ready room at an Olympic final, you don’t deserve to be there. Just so overblown, as was the Lily King finger wag.

I totally agree. I don’t actually think there was anything there either, as was mentioned above it was a moment taken and used by media to frame him as the villain. It was fabricated, but now has become a truth. It’s actually really horrible.

Now that made me LOL 😂

Ranomi is #3 in the world as far as I’m aware behind McKeon and C1.

Lol didn’t think of that

Feels calculated even publicizing that.

Or, I don’t know, just honest?

Who wants to train with your main Olympic rival so you can know their race tactics ? Hmmm

How are they main rivals? Le Clos will have an uphill battle to beat Kenderesi/Burdisso/Seto for a minior medal in the 200 fly.

Le clos has proven himself to be an Olympic gold medalist in the event .. never write off a champion ..

Kendersei hasn’t medaled at a global championship since Rio, Burdisso has never broken 1:54, and Seto has looked average at best. Le Clos was able to go 1:54 in 2019 with stupid pacing and a groin injury, plus his times in-season for him have been quite strong in 2021. He has as good of a chance as any to get a minor medal, not an “uphill battle”.

Do you think they were going to do time trials? What do tactics of a set of 100 flys have to do with an actual race?

I would have said no too. But Chad was already there training with Katrina (in the same pool I think?). Milak has nothing to gain by letting Chad train with him!

Katrina Hurricane Hosszu?
Milak knows what will happen in Tokyo. Chad will go like a fast boat and helps Milak to swim 1:49.

Other than saying he trained with an Olympic champion in his best event, torch-passing and all that. You’d think Milak would be a little more confident than that to say, sure, let me crush you in a set or two.

Milk actually does USRPT but doesn’t want Chad to know