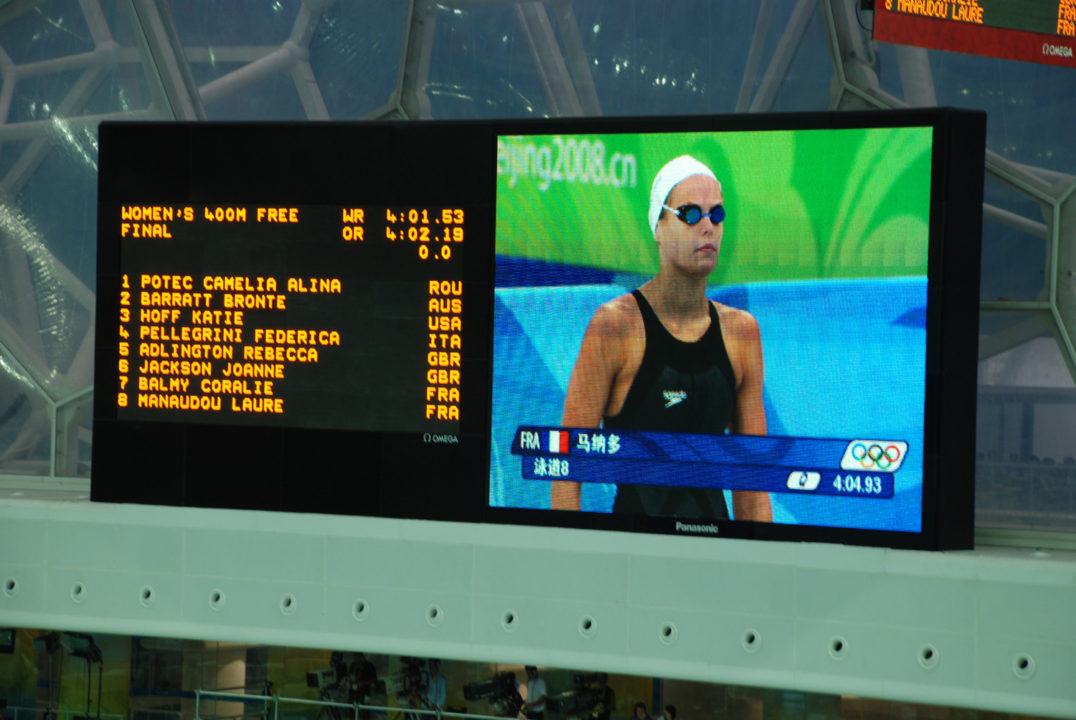 Former French swimmer Laure Manaudou is the latest swimmer announced for the 2017 class of the International Swimming Hall of Fame.... Archive photo via JMex60

Former French swimmer Laure Manaudou is the latest swimmer announced for the 2017 class of the International Swimming Hall of Fame. The class has turned into a star-studded group for swimming fans of the 2000s, with Manaudou joined by countrymate Alain Bernard and Australian breaststroker Leisel Jones also among the inductees. The full list so far, with 1 remaining to be named:

Manaudou was part of a golden era of French swimming. At the 2004 Olympic Games, she won 3 individual medals – gold in the 400 free, silver in the 800 free, and bronze in the 100 backstroke. In total, she earned 6 World Championship medals in her career, along with 18 European titles. She broke 5 World Records in her career, at every distance from 200 through 1500 meters freestyle, and was twice named the French Sportsperson of the Year.

At the 2008 Olympics, Manaudou struggled to recapture her form from 4 years earlier. She charged to the lead halfway through the women’s 400 free final before fading to 8th, admitting afterwards that she had given up. A year later, at just 22 years old, she retired from competitive swimming.

In April of 2010, her and her boyfriend at the time Fred Bosquet (who one day is also destined for the Hall of Fame) had their first and only child together, Manon. Shortly thereafter, Manaudou returned to full-time training at Auburn University in the United States. She went on to qualify for the 2012 French Olympic team in the 100 back, 200 back, and 400 medley relay where, among other things, she got to watch from deck as her younger brother Florent won Olympic gold in the 50 freestyle.

Laure Manaudou was born on October 9, 1986 in Villeurbanne, France. She swam for the club of Ambérieu-en-Bugey, in Ain, from the age of 6 to 14 years old.  In 2000, coach Philippe Lucas spotted her and convinced her parents that he would make her a champion. She then left the family nest to join her new coach in Melun, and a year later she won two silver medals at the European Junior Championships in Malta. Everyone started talking about her enormous potential.

In 2003, at the age of 16, Manaudou won her first French national title in the 50m backstroke, at the French championships. The following year she took gold in the five individual events (400m, 800m, 1500m, 50m back and 100m back) at the French Nationals and qualified for her first Olympic team.  In Athens, a few months later, she won the gold medal in the 400m freestyle.  It was France’s first gold medal ever in women’s swimming and the first swimming gold medal won by a French athlete since Jean Boiteux’s victory in the 400m men’s freestyle event at Helsinki in 1952. Manaudou also won the silver medal in the women’s 800m freestyle and the bronze medal in the women’s 100m backstroke, thus becoming only the second Frenchwoman to win three medals in a single Olympic Games, Summer or Winter.

In 2005, she defended her world title in the 400m freestyle at the 2005 FINA World Championships. At the French Championships in 2006, she did what many thought was impossible. For eighteen years, women swimmers had been chasing the seemingly untouchable record set by America’s Janet Evans in the 400m freestyle at the 1988 Seoul Olympic Games. There was reason to believe it would last for eternity, but Laure Manaudou finally broke it and she lowered Evans’ standard again at the European Championship three months later.

She confirmed her status as a favorite to repeat as Olympic champion in Beijing, by winning 5 medals including 2 gold, 2 silver and 1 bronze at the 2007 World Swimming Championships in Melbourne, Australia. Shortly thereafter, she signed a sponsorship contract for 5 years for a sum of money that would be close to 1 million euros a year. The same year, on May 6, 2007, she decided to part with coach Philippe Lucas to train in Italy.

Manaudou was the star of French swimming and a real hope of multiple medals at Beijing 2008, but by her own admission 2007 was a crazy year as personal issues interfered with her training. After a season where she had four coaches and a loss of motivation, Laure finished a disappointing 8th in the 400m final and 7th in the 100m backstroke.

She announced her retirement in early 2009, but living in the United States two years later, started training again and although she qualified for the London Olympic Games in the 100m and 200m backstroke, she failed to advance beyond the preliminaries.  She announced her retirement and left the international aquatic stage as she started it, after winning the 50m backstroke at the European (SC) Championships in November of 2013.

In 2014, Laure released her autobiography, Entre Les Lignes (Between The Lines).  It is a candid, honest account of her life in competitive swimming, with its sacrifices, its ups and downs, her relationships with her brothers, coaches and lovers and the challenges she faced dealing with fame at an early age.

Does anyone have any English articles about how her former coach , Phillipe Lucas, trains his swimmers? I have wanted to know about his training philosophy/ workouts/dry land but have never found any info.

I don’t. But if you google him and Amaury Leveaux you will see some rather entertaining videos of what it looks like. The dialogues, in French, are priceless.

Basically, he pushes his swimmers very hard in the water and in dry land exercises.

I’ve not found any article about his training methods but I have for you some videos. But everything is in French of course.

And the best of the best with Amaury Leveaux! 😆
https://www.youtube.com/watch?v=sIGV_Ua4Ndg

He and Shane Tusup should hold a coaching convention together.

A rather bad choice for the picture. She was Olympic Champion in Athens, and won a lot of golds. Here you show her worst Olympic race: last in Beijing! Not very nice from you… 🙁