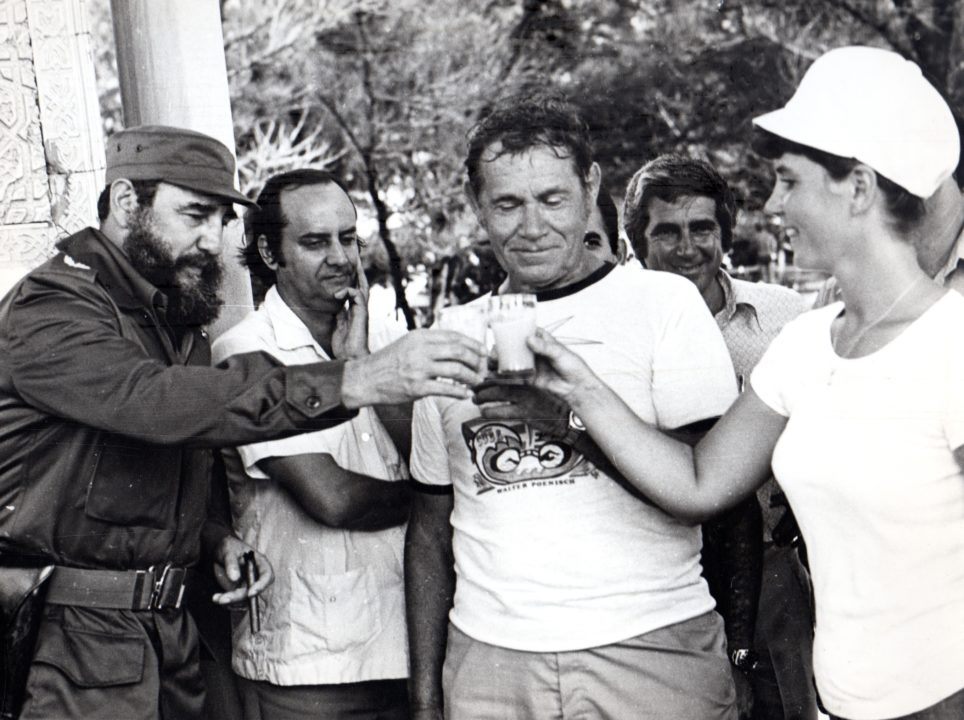 The International Swimming Hall of Fame has announced their third honoree for the class of 2017, one of 17 honorees in... Archive photo via ISHOF

The International Swimming Hall of Fame has announced their third honoree for the class of 2017, one of 17 honorees in the group. Long distance swimmer Walter Poneisch of Grove City, Ohio will be inducted to recognize his achievement as the first known person to swim from Cuba to the United States, which he did in 1976.

This year, the 17 inductees will be announced in 4 different groups before the ultimate ceremony that will return to Fort Lauderdale from August 25-27.

Poneisch joins Wu Chuanyu and Zhang Xiunei, who were both announced last week as honorees in the Pioneer Category, as announced members of the class of 2017.

See below for the complete press release from the ISHOF.

FORT LAUDERDALE – The International Swimming Hall of Fame (ISHOF) today announced that Long Distance swimmer Walter Poenisch, of Grove City, Ohio will be one of seventeen (17) honorees to enter the International Swimming Hall of Fame as the Class of 2017. Walter’s is the third name to be announced for ceremonies to be held August 25-27, in Fort Lauderdale. Previously, the names of Wu Chuanyu and Zhang Xiunel were announced.

“Lost in time and in the avalanche of publicity surrounding attempts by others to swim from Cuba to the USA over the past 40 years is the remarkable story of Walter Poenisch and his ‘Swim for Peace.’” says Bruce Wigo, ISHOF’s President and CEO. “Walter will enter the ISHOF as a “Pioneer” and I want to commend the selection committee and it’s Chairman, Camillo Cametti, of Verona, Italy, for recognizing Walter, who was one of the first to use his swimming talents to promote a greater cause.” The Pioneer category was created to honor great achievements that have been overlooked by the fog of time or special circumstances that interfered with their careers, such as accidents, war or politics.

Born on July 11, 1913, Walter Poenisch was a baker, rodeo competitor, strongman and swimmer, who entered his first competitive swim in 1963, to show that a 50 year old man could be as active as young fellows. It was the 60-mile Jim Moran professional marathon swim in Lake Michigan. Walter failed to finish but was hooked on the sport and was determined to swim even greater distances. Troubled by the Cuban Missile Crisis that brought the world to brink of nuclear catastrophe, he conceived of the idea of swimming the 90 miles from Cuba to the USA for world peace. “To further better relations between my country and Cuba,’ he said. As the USA had no formal relations with Cuba, Walter started a letter writing campaign to governments that had contact with Havana. With optimism and confidence in his cause, Walter immediately began serious training. But the required permissions were not forthcoming. For years he continued to write letters, make calls and worked with Rene Mujica of the Cuban Interest Section in Washington, DC. All the while, he continued to train, setting up training camps in Fort Lauderdale and keeping his dream alive in the media with stunts like towing boats filled with passengers and setting long-distance records in the Florida Straits. In 1976 he swam — certifiably into the Guinness Book of World Records — 122 1/2 miles from Key West to the tip of the Florida peninsula, at the time the world’s longest ocean swim. In 1976, he received permission from the Cuban government to apply for a visa, which was finally granted in March of 1978. The swim was planned to begin on July 11th, 1978, a date coinciding with Walter’s 65th birthday. On hand to personally celebrate Walter’s birthday and wish him success on his “Swim for Peace” was Cuban leader Fidel Castro. Before entering the water, Castro proposed a toast honoring Walter’s efforts and his dream of peace between their two nations. Walter was the first person to attempt to swim from Cuba to the USA for sport and rules were drawn up by an authenticating organization, The International Federation of Ocean Swimmers and Divers. These rules, announced before the swim, permitted him to use a shark cage, fins to protect his feet from the cage, and a snorkel. He was also permitted to get out of the water up to four times for a period of no longer than five minutes to administer emergency medicine treatment, receive critical nourishment or for any reason that directly threatened the life of the swimmer. Walter followed these rules to the tee and thirty-four hours after leaving Cuba, Walter completed his dream, culminating on the shores of Little Duck Key, Florida. According to legendary sports reporter and author David Heeren, who covered Walter’s swim for the Fort Lauderdale News, “His (Walter’s) accomplishment was greater, in my opinion, than the climb of Everest. There have been many Everest climbers, but only one (legitimate) Cuba to U.S.A. swimmer.”

Walter Poenisch passed away on June 6, 2000, never having received the recognition due him for inspiring generations of swimmers and others with his persistence, perseverance and courage. He is survived by his wife, Faye, who will accept his honor on his behalf.

About ISHOF
The International Hall of Fame, established in 1965, is a not-for-profit educational organization located in Fort Lauderdale, Florida. Its mission is to promote the benefits and importance of swimming as a key to fitness, good health, quality of life, and the water safety of all adults and children. It accomplishes this through operation of the International Swimming Hall of Fame, a dynamic shrine dedicated to preserving the history, memory, and recognition of the famous swimmers, divers, water polo players, synchronized swimmers and people involved in life saving activities and education whose lives and accomplishments inspire, educate, and provide role models for people around the world. For more information contact Bruce Wigo at 954-462-6536 ext. 201, or by email [email protected]ishof.org

I am more than happy to see that justice is finally being made to honor Walter Poenisch, the first swimmer to swim from Havana to the Florida keys in 1978. I was present when Walter jumped into the safety cage in Havana and during the ceremony that was held before he took of. His feat was indeed an incredible one and I am very grateful to him for seeking to bring peace and tolerance between our two countries. Walter is for me an ambassador for perseverance and peace! THANK YOU!