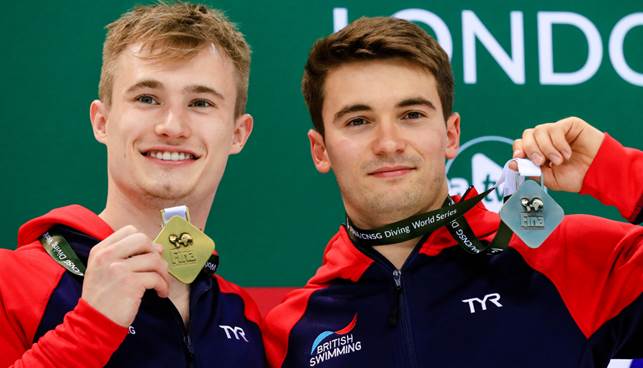 The event will host close to 150 of the country’s top divers, with 10 national titles on the line, along with selection for the 2021 FINA World Cup.

Jack Laugher MBE and Dan Goodfellow produced a pair of stunning performances to secure a Great Britain 1-2 in the Men’s 3m Springboard at the London leg of the FINA/CNSG Diving World Series.

Laugher came into the competition as one of the favorites, having won at the penultimate leg of the series in Kazan last weekend, but few could have predicted he would have challenged an 11 year old world record en route to gold and the overall World Series crown.

For Goodfellow it was an absolutely stunning breakthrough performance, as after setting a personal best of 475.25 points this morning he obliterated that score to win his first World Series individual 3m Springboard medal with a score in excess of 500 points. Such was the achievement of the pair that it was the first time Great Britain has delivered a World Series 1-2 in the competitions 12 year history.

As well as a number of Great Britain flags in the crowd, there was also a Yorkshire flag on display, which was apt given the Leed’s pairs incredible performances. The leader board after the opening round looked extremely rosy from a British point of view, with Laugher and Goodfellow occupying the top two spots, something they maintained with flawless diving. At the halfway mark Laugher was stretching away from the rest of the field, largely thanks to a spellbinding Inward 3 ½ Somersault Tuck (407C) that scored 100.30 points, whilst Goodfellow maintained his medal challenge in third place.

In round four Goodfellow regained second spot with an impressive score of 87.75 for his (5156B) whilst Laugher looked unstoppable, securing another 95.55 points with the same dive, before a Forward 4 ½ Somersault Tuck (109C) in round five attained a remarkable 106.40 points to put the result beyond doubt.

First up in the final round came Goodfellow, a super smooth Back 3 ½ Somersault Tuck (207C) scoring 86.40 to confirm he would be stepping onto the second step of the podium with a PB score of 500.55 points, which in the end was almost 20 points clear of Zongyuan Wang’s bronze medal tally.

Up last with the world record there for the taking, Laugher needed another impeccable dive, but in the end it was just slightly out of reach, as he ended the competition on a stunning 562.65 points. Of his runaway victory the Olympic champion said:

“I am over the moon with the first five dives. That is the highest score I have ever been on leading into my final dive and if I had just put a back three and a half in I would have got a world record! That’s how good the diving was this afternoon and it’s looking really good leading into the World Championships.

“It is really fantastic to get a 1-2 with Dan and for him to get over 500 points is a real world class performance – for him to do it in front of a home crowd is unbelievable. If we can do that together there is no limit to what we can achieve.”

Goodfellow was still in shock, adding:

“I don’t have the words right now. I was really disappointed by how the synchro went so it’s great to get my confidence back and dive well in front of a home crowd. When you have the crowd behind you feel proud when you stand on the board and you know you have to do something good. That’s my first 500 list, which is what my goal has been the whole season, so I’m really pleased.”

Robyn Birch was also in individual action on the second night in London, contesting her first World Series final in the Women’s 10m Platform.

Getting off to a wonderful start with a beautiful Armstand Back 2 Somersault 1 ½ Twist (6243D), which was awarded 76.80 points, Birch led after the first of five rounds but by the end of round three it was looking like it was going to be a two horse race between the Chinese pair of Minjie Zhang and Yuxi Chen. For Birch though, round three brought another score in excess of 70 points to leave her fourth with two rounds remaining.

Heading into the fifth and final round the Chinese pair still led and that’s the way it remained, however Chen would take gold and Zhang the silver, with the People’s Republic of Korea’s Rae Kim Mi bagging bronze. Birch however knew a solid final dive would see her maintain a brilliant fourth place in her first ever World Series final and she delivered, much to the appreciation of the home crowd.

Finishing with a score of 327.90, Birch was pleased to exceed 300 points twice in one day, commenting:

“I’m really happy with my performance. I went into it with nothing to lose and made my first World Series final.  Every performance helps me to build my confidence and believe in myself more. I’m going to refine my current dives going forward and the next competition will be Nationals in two weeks and hopefully qualification for the World Championships.”

Rounding out a stunning evening of diving inside the London Aquatics Centre was the Mixed 10m Synchro, with Lois Toulson and Noah Williams stepping onto the platform for Great Britain. A new partnership, diving together for the first time, their pair produced an impressive performance against far more experienced opposition.

The action resumes at 10:00 on Sunday morning, with world champion Tom Daley back in action in the individual 10m platform event.

Tickets for all sessions are available on the door throughout the weekend – please note tickets are no longer available online.