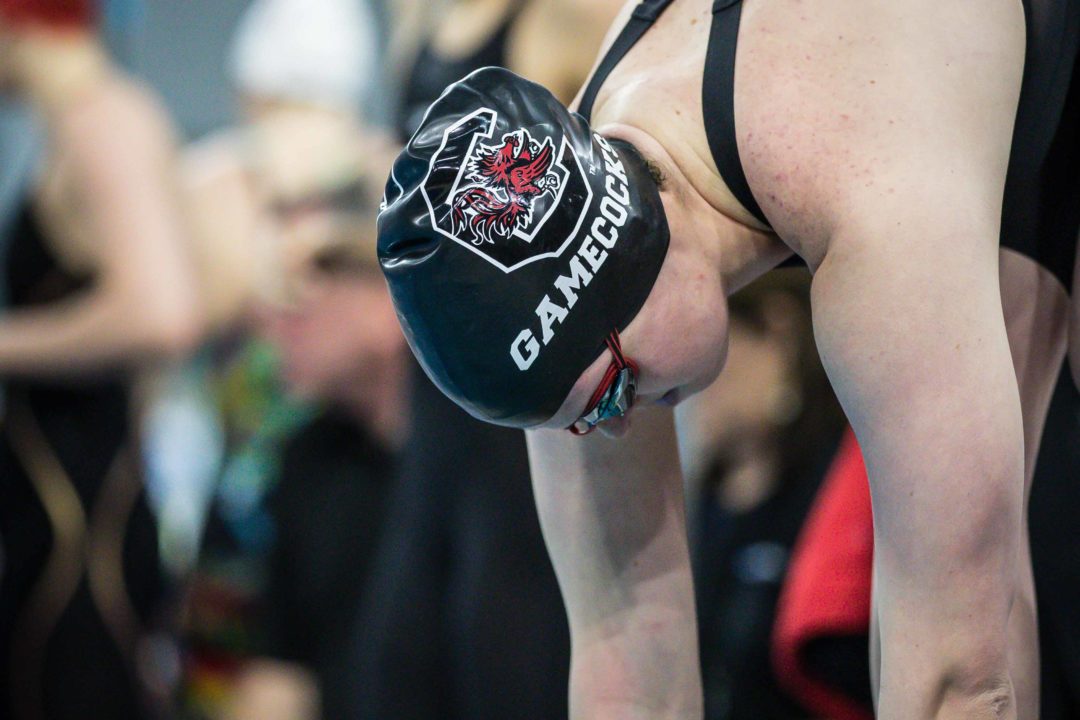 Christina Lappin led the charge for the women as the Gamecocks men and women took a road victory against ECU on Saturday to open 2020. Archive photo via Jack Spitser/Spitser Photography

The South Carolina men and women picked up their first wins of 2020 on the road as the beat ECU on Saturday. It was a close meet on the men’s side, with USC winning by 12 points. ECU’s Marek Osina was the only swimmer of the meet to win 3 individual events, starting with a 1:40.83 in the 200 free.

ECU’s Adela Vavrinova also pulled off a winning double. Her first win came in the 100 free, where she edged out USC’s Emily Cornell, 51.59 to 51.66, after a stroke-for-stroke battle the whole way through. Vavrinova was dominant in the 200 IM, winning by nearly 3 seconds in 2:02.96. She was behind at the halfway point, but used her breaststroke speed to pull ahead of USC’s Albury Higgs (2:05.74).

GREENVILE, N.C.— South Carolina Swimming and Diving started the new decade off right, turning in a dominating performance at East Carolina Saturday, winning 180-113 on the women’s side and 156-144 on the men’s. The wins mark the second on the season for the men and the women.

The Gamecocks started off the meet hot, taking home seven of the first 10 events, and never. looked back. South Carolina swept all four diving events en route to winning 20 of the 32 events on the afternoon.

QUOTABLE HEAD COACH MCGEE MOODY:
“We had the opportunity to start off our spring semester racing a great East Carolina team.  Our men and women responded well to the training we have put them through over the last six weeks and were able to put up some solid times.  ECU was ready to race, and we had to be at our best to get the win.  We are going to get back to it on Monday and get ready for Georgia Tech next Saturday.”

Up next for the Gamecocks
The Gamecocks will return home to host Georgia Tech on Sat., Jan. 18, at noon at the Carolina Natatorium.

GREENVILLE, N.C. — The East Carolina men’s and women’s swimming and diving team closed out their home schedule Saturday afternoon by putting up some of their fastest times of the season, but ultimately dropped the dual meet to South Carolina at Minges Natatorium.
In the final event of the day, the U of SC men’s 400 freestyle relay team edged ECU by 0.82 seconds to win the meet, 156-144. The Gamecocks defeated the Pirates on the women’s side, 180-113.
“We had some really big swims today,” ECU Head Coach Matthew Jabs said. “Our women raced hard and dove well. The men’s meet came down to the last relay and every race was a battle. We had some impressive in-season performances both in the pool and on the diving boards. I’m proud of our entire team and the effort put forth in today’s meet“
ECU sophomore Marek Osina led the men’s pursuit with three first-place finishes, edging out U of SC sophomore Phil Costin by 0.19 seconds to win the 200 freestyle, his first event of the day. He later beat out teammate Magnus Andersen in a pair of events, touching 0.74 seconds ahead of him to capture the 200 backstroke and nearly three seconds in front of him in the 200 IM.
Lyubomir Epitropov swept the breaststroke events, swiping the wall 0.04 seconds before the Gamecocks’ Lionel Khoo to win the 100 and then touched 0.58 seconds before him in the 200.
Freshman Adam Mahler provided the Pirates’ only other individual win by finishing the 200 butterfly 0.31 seconds ahead of the field.
Adela Vavrinova was the lone multi-event winner for ECU on the women’s side. She narrowly claimed victory in the 100 freestyle, touching just 0.07 second ahead of the Gamecock’s Emily Cornell. Her win in the 200 IM was much more comfortable, finishing nearly three seconds in front of the runner-up.
Shannon Stott and Kristen Stege also claimed individual wins with Stott capturing the 200 butterfly and Stege the 500 freestyle.
Rodrigo Romero became the first ECU diver to break 400 points in dual meet, scoring 400.50 points on the 3-meter springboard to place second. He also placed second in the 1-meter diving competition with 339.0 points.
ECU will close out its dual meet season Jan. 25 at UMBC.