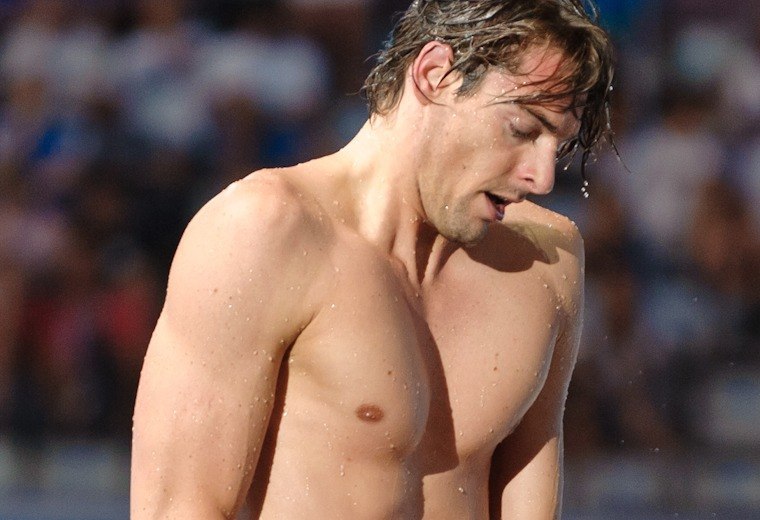 Men’s 800 free: The elite (senior national) meet kicked off with the top ten seeds of the men’s 800 free. The fastest time coming out of the morning heats had been 8:07.37 from Charlie Cuignet of Toulouse. In the evening heat 2013 fourth-place finisher Anthony Pannier (Sarcelles) took it out first and led wire-to-wire, eventually touching in 7:56.11, a couple of seconds off his seed time.

This wasn’t the fastest 800 free final on record at French Nationals, but then again the Euro qualifying standard, at 8:04.2, was pretty generous. France’s top three distance swimmers, Pannier, defending champion Damien Joly (Antibes), and Joris Bouchaut (Toulouse) could pretty much cruise to qualification. As it turns out they finished first, fourth (8:01.02), and second (7:57.53), respectively. Coming in third, and qualifying for Berlin, was Axel Reymond of Le Plessis-Savigny, thanks to an 8-second drop for his first sub-8, 7:58.45.

Women’s 200 back: Top-seeded Cloé Credeville (Marseille) won in 2:12.55. Although she was almost three seconds slower than her seed time she was nonetheless 1.5 faster than a year ago, when she finished second to Evelyn Verraszto of Hungary. Fantine Lesaffre touched second with 2:13.63, a second faster than her seed time and 2.5 better than last year. Both women qualified for Euros. Just missing the Berlin cutoff but earning a spot on the podium was third-place Justine Ress in 2:14.91, a 1.5-second improvement from her seed time.

Men’s 100 back: The matchup of the night pitted 2012 Olympic co-champions Camille Lacourt (Marseille) and Jérémy Stravius (Amiens) against each other for yet the nth time. While they turned virtually together at the 50, Stravius 26.48 and Lacourt 26.49, in the end it was Lacourt who got to stand alone on the top step winning 53.73 to 53.86. Benjamin Stasiulis (Marseille) took third with 54.83, while Eric Ress was fourth. Ress just missed the Berlin selection; although he entered the meet with 54.94 and swam 55.21 in semi-finals, his 55.25 final swim missed the cutoff by .01. With the exception of Florian Joly (Toulouse), the entire ten-lane championship final was off their seed times. Lacourt and Stravius still slip in to the world’s top 10 ranking for 2014, although we’ll see how long they stay there with all the national championships taking place over the next week or so.

The future of French breaststroke was on display as two young men set national age group records in Chartres. In prelims, seventeen-year-old Jean Dencausse of Toulouse went 1:02.64 to finish fourth overall and break his own national record for 17-year-old boys (1:02.73). He broke it again in semis, going 1:01.94. He was just off that time in finals, but did manage to finish fourth in the men’s open race.

Women’s 100 free: In a tough double, Nice’s Muffat had the top 100 free time out of semi-finals with 54.73. Teammates Anna Santamans, Bonnet, and Chloé Hache will also contest the championship final.

Lacourt and Stravius were co-champions at World Champs in 2011, no?

Yes, while Stravius has stayed in France for training, Lacourt went to Australia to train in the past year.

Boring day 2.
Slow times.
It looks like most of the big names keep the best for the summer and are in Chartres just to qualify.
The times required by the federation to qualify for Berlin are very easy to do.
Stravius and Lacourt have a so big margin that they can qualify easily event at only 80%.
The winner of the men’s 100 breast in 1.01! 😥
The winner of the women’s 200 back in 2.12! 😥
We’ll see in the next days but it’s pretty boring so far.
Hopefully Agnel will wake up these championships today in the 200 free final.

Your girls, except Lotte Friis, were fast recently at the Danish Open. RMP, Nielsen, Blume, Ottesen. Don’t complain too much! 🙂

Heh, I won’t complain about that, but more that like your championships the gap to the next place is often huge because there is no depth.

I am hoping ‘my’ girls are going to do something special in Eindhoven this weekend, although I wonder why Jeanette hasn’t swum in the 50 free semis. I have been looking forward to the next clash of her and Pernille for who gets to be Danish top dog 🙂

24.59 for Pernille in the 50 free semis, 3rd in the final with 24.73. She is very very close to Jeanette’s shiny suit Danish record! She is really very impressive this year.

Very impressive Pernille Blume.
Perhaps I’m wrong but it looks like she’s the only swimmer who left Fabrice Pellerin in Nice and swims faster then. Much faster in her case.
For Agnel and Friis we’ll see next summer but it’s not fantastic so far.
Weird she didn’t like the Mediterranean climate. 🙂
Your medley relay looks better day after day.
Hopefully you will beat the Russians at the European championships.
Hopefully you will crush the Russians at the European championships. 🙂