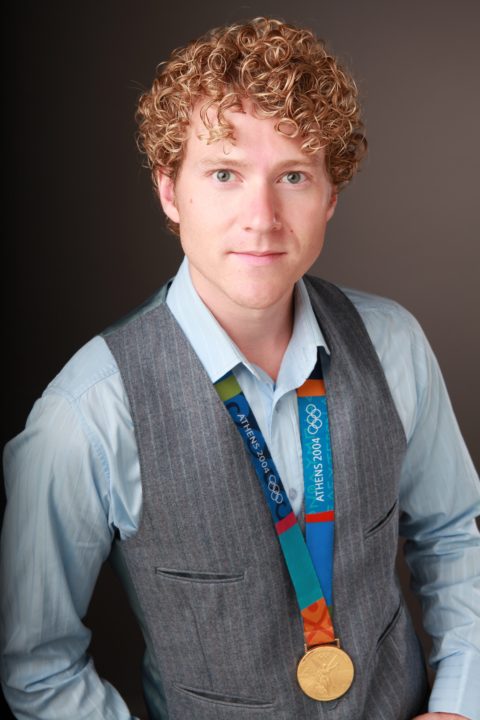 Kyle Shewfelt, an Olympic gold medalist in gymnastics, has penned poetic ponderings about how he learned to love swimming. Archive photo via Kyle Shewfelt

Kyle Shewfelt is not a swimmer by profession, but he is certainly quite familiar with elite athletics. The 2004 Olympic gymnastics gold medalist (floor exercise) was Canada’s first ever Olympic medalist in artistic gymnastics, and holds a special place in the history of that sport.

After completing his elite competitive career, Shewfelt has become active in other types of athletic endeavors, including a trained yogi, a marathoner, and a triathlete. As part of his triathlon training, Shewfel began to spend a lot of time swimming, and through that swimming he had a lot of time to reflect. He was inspired to write the poem below through his experience of becoming more comfortable in the water.

Read more of Kyle’s reflections on training and life at his blog, kyleshewfelt.blogspot.com.

It all started in January when I needed a new goal
I was a bit lost, feeling out of control
I decided I wanted a challenge that was unfamiliar
Because something that was easy just wouldn’t be fair.

I jumped in to the pool on the very first day
I swam 25 metres and flailed my arms the whole way
I’m surprised the pool had water left when I was done
I swallowed so much of it. Man, that wasn’t fun.

I walked away from the pool that day and told my sweetie that I HATED swimming
I was convinced that this was an activity that I would never be winning
I hummed and hawed – do I continue because I can grow and expand?
Or do I quit because life’s too short to spend it doing things you can’t stand?

I made a choice. I was going to see it through.
A part of my heart felt it would never come true
Me – being able to swim for a full 1500 metres?
In open water none the less. Jeepers Kreepers.

I showed up each day, put on my goggles and cap
Some days felt awesome while other felt like crap
I asked for advice, took lessons and listened
Focused on my stroke as my speedo glistened.

Months and months passed by and I could finally breathe
Through the side of my mouth, oh what a relief!
My stroke became smoother and my arse felt less heavy
Was I actually getting the hang of this? Time for a bevvy??

I stood on the start line at Wasa Twenty Thirteen
Feeling scared to death, but proud as a Mexican jumping bean
I had struggled and questioned, loathed and hated
Now I stood in a wet suit, heart pounding as I waited

The gun went off and the crowd rushed in to the water
I let them go like a patient little otter.
I didn’t want to get a boot in the face
I wanted to survive, that was my goal for this race

Slow and steady, I began to make ground
Under the water, you could barely hear a sound
All I could hear was the voice in my head
And it was saying, “6 months ago, you thought you’d be dead.”

But here I was, swim swim swimming away
I wasn’t dying, in fact I was pretty okay
At 850 meters into the race I did a heart check and a smile came rushing across my face

I thought back to that cold day in January when I thought about giving up
And here I was, in my first triathlon race, raising the roof and sayin’ “What’s up?!”
I became immersed in the moment and cheeky with pride.
This was me, swimming along, and enjoying the ride.

As I came closer to the beach, marking the end of the swim and time for transition
A part of me was sad because I kind of liked being in this position
I had committed and conquered and nothing feels better
Well, maybe at Christmas when your grandma gives you a sweater 😉

The moral of the story goes something like this:
Anything is possible if at first you don’t dismiss
As Jim Cuddy sings, “You’ve got to Try. Try. Try. Try.”
Be open minded. Allow time before you ask Why?

Enlist the help of others and give it your best shot.
Show up each day and give it everything you’ve got.
Learning something new is awkward as heck.
You’re a fool if you believe you won’t be a wreck.

But attitude and approach are simply a choice:
Be open to learning and listen to the good voice.