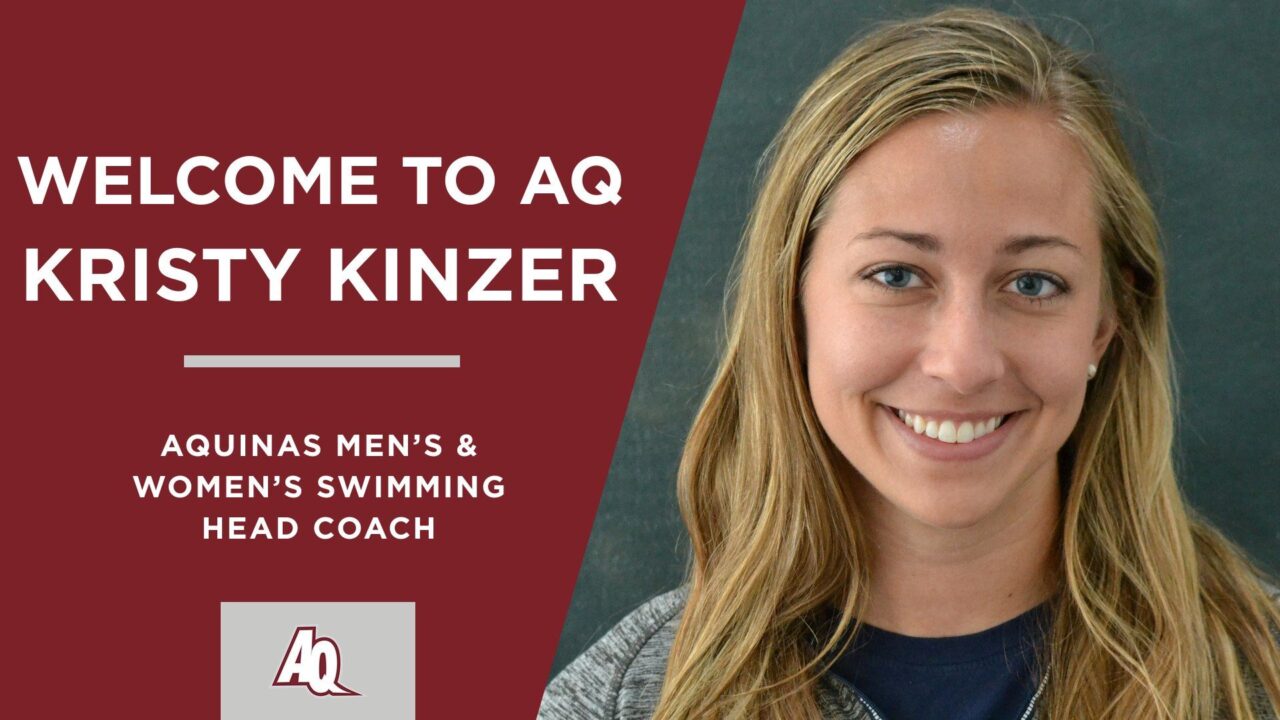 Most recently an assistant coach at Case Western Reserve (Ohio), Kinzer returns to West Michigan, where she was an All-American swimmer at Calvin. Current photo via Aquinas Athletics

Aquinas College Associate Vice President for Student Affairs and Athletics Nick Davidsion is excited to announce the hiring of Kristy Kinzer as the first head swimming coach in Aquinas program history. Most recently an assistant coach at Case Western Reserve (Ohio), Kinzer returns to West Michigan, where she was an All-American swimmer at Calvin.

Kinzer becomes the first head coach of the recently announced AQ men’s and women’s swimming teams; she will oversee both of the new Saints programs, which are recognized as official NAIA sports. Plans for swimming facilities are still being finalized, but it is believed that the AQ swimming teams will compete at off-campus locations in the Grand Rapids area.

“I am honored and thrilled to be the inaugural head coach of the Aquinas College men’s and women’s swim teams,” Kinzer explained. “Coaching is my God-given vocation and building a positive and dynamic team culture is one of my top priorities. I believe that the pool is an extension of the classroom. What we are able to accomplish as a team will mold my future student-athletes into people of character, integrity, and lights to their community both here at Aquinas and beyond. I can’t wait to lead the Saints to an exciting and competitive future!”

Kinzer was also a physical education instructor for wellness at Case Western Reserve and also taught swim classes in addition to her assistant coaching role. She served as the recruiting coordinator, worked with each training group and wrote practice plans, scheduled individual technique video sessions, and helped with general team operations such as travel arrangements and academic success.

“We’re really pleased to have Kristy join our department as the first head coach in Aquinas swimming history,” mentioned Davidson. “She has shown success as both an assistant coach and as an athlete and we’re excited to see her build our men’s and women’s programs in the coming years. Growing up, competing, and coaching in West Michigan gives her an advantage in local recruiting and we’re confident she’ll be able to tap into the strong local swimming programs. I’m looking forward to watching her teams compete next year.”

Prior to her tenure at Case Western Reserve, Kinzer spent two years (2017-2018) as the head coach at Mattawan High School for the girls’ swimming and diving team. In the spring of 2019, she also served as an intern with Western Michigan University’s strength and conditioning program for the Olympic sports.

Kinzer swam collegiately at Calvin and received NCAA Division III All-America honors in the 2012-13 season after earning Honorable Mention All-America accolades in 2009-10. She also was an Academic All-American at Calvin before returning a few seasons later to serve as an assistant coach with Calvin’s men’s and women’s swimming and diving teams. During her time on the Calvin staff, both Knights teams captured MIAA championships in 2016 and the women repeated as conference champions in 2017.

Kinzer will soon begin her responsibilities at AQ and start to prepare for the 2021-22 campaign.